Are you thinking about adding a Royal gramma basslet to your saltwater tank? If so, you’ll be in good company because Gramma loreto is a great beginner fish and is one of the most popular fish in the hobby. For a good reason! This is one of the first animals I added to my reef tank, and I have had one in my reef tank almost the entire time.

If you are looking for some specific information, you can use the table of contents below, jump right there--or keep scrolling to review the entire article. 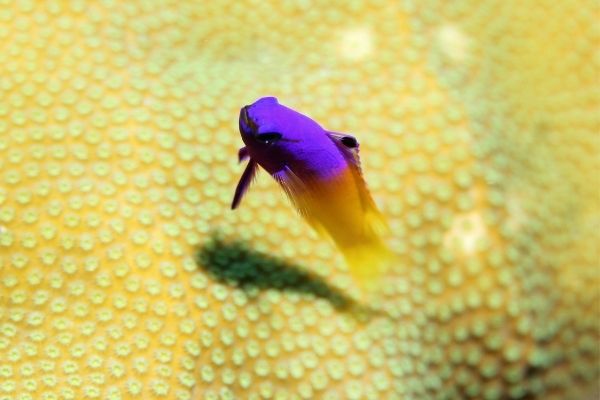 How much does the royal gramma fairy basslet cost?

More good news. In addition to being a beautifully colored, hardy saltwater fish, Gramma loreto is also relatively inexpensive--generally, the price is in the $20-30 range, at least near me (East Cost U.S.) and on popular online fish stores.

How big does a Royal gramma basslet get?

A fully mature adult Gramma loreto fish grows to about 3-inches in size. 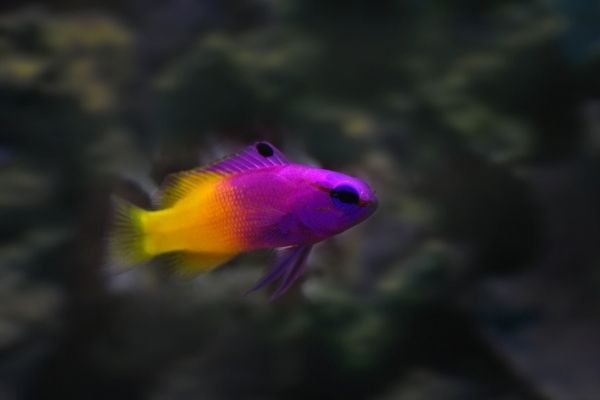 Is the fairy basslet reef safe?

From a care and husbandry perspective, gramma loreto does not appear to have very specific or troubling requirements. They eat almost anything. In my experience, they tend to prefer meaty live foods, like brine shrimp and black worms, but they also greedily eat meaty frozen foods, like Mysis shrimp.

Like most fish, they will take live or frozen food offerings over prepared flake or pellet foods, but they will consume prepared foods if that is all that is offered. Their mouths seem to be surprisingly large compared with the size of their bodies, and they are capable of consuming fairly large bits of food when they are motivated to do so.

I’ve recently added the gourmet defroster, a small gadget made by Innovative Marine, which helps with planktivores like basslets. Just plop in a cube of frozen food, and it floats into the water column as it thaws. It only lasts a few minutes from start to finish, but it does space out the feeding just a bit compared with my previous method of thaw…and dump the food in.

Do they hide a lot? Where will the Royal gramma fish spend their time?

In a reef aquarium with sufficient structure, the Royal gramma fish will spend its time suspended in the water vertically, with its belly along a preferred wall of the aquarium or reef aquascape. Their bold purple and yellow colors will stand out in any reef--and their general boldness will make them a staple in any reef tank and are part of what makes them a great beginner fish for any reef tank.

They can be a bit shy, at times, hiding in the crevices of your rockwork, or if really scared, they may actually swim into the rock if it can find a place to wedge in and hide. You can encourage them to be bolder if you have bold fish swimming in the tank, signaling the ‘all is clear.’ They may be coaxed out by the small of food if they otherwise feel safe. 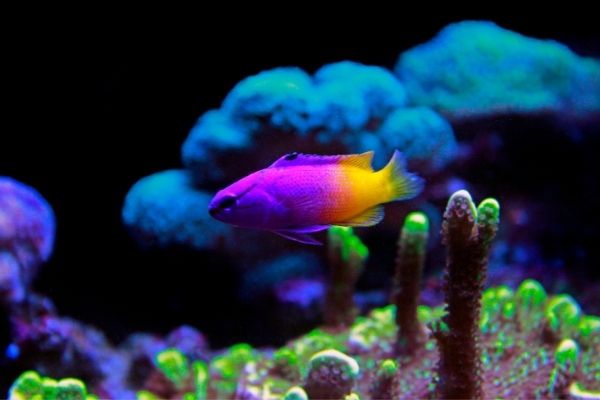 One of my favorite things about gramma loreto is that they will sometimes spend their time suspended at (what seems to me to be) unusual angles based on the aquarium glass or rocks in your tank. It is fun to observe.

Make sure to look for all of those distinguishing features to avoid inadvertently purchasing the wrong species. By comparison, the very similarly colored Royal Dottyback also has a purple and yellow body. Still, as you can see in the image below (Royal Gramma on the left and Royal Dottyback on the right), you can see the dottyback lacks the black line through the eye, the black spot on the dorsal fin, and a very ‘harsh’ line that separates the purple from yellow coloration. Notice the distinguishing black line thru the eye, black spot on the dorsal fin, and gradual transition from purple to yellow that is characteristic of the Royal Gramma Basslet.

Is the Royal gramma basslet aggressive with other saltwater fish?

A couple of years ago, I had purchased three small Royal gramma basslets from a local fish store intending to breed these magnificent fish, but the piscine trio did not last long.

I know this is not exhaustive research into the conspecific aggression seen within these species. Still, I have read enough accounts encouraging the addition of a single royal gramma specimen, per aquarium, to extrapolate my own personal experience and justify the old rule of thumb. The only other aggression you have to watch out for, with this fish, is with a similar-looking rival, the royal dottyback. Please don’t try to keep these two species in the same tank together. Things won’t end well for at least one of them. Other than that, the Royal gramma fish is compatible with all corals and most other fish species.

Compatibility with other fish

I have personally had success keeping the royal gramma with a yellow tang, engineer gobies, flame angelfish, coral beauty angelfish, green chromis, breeding clownfish, flame cardinalfish, Banggai cardinalfish, pajama cardinalfish, Neon gobies, Diamond gobies, and I’m sure a lot more. Hopefully, that gives you a good sense of the types of fish they are compatible with.

The types of saltwater fish I would avoid keeping together would be any aggressive fishes, including blue devil or domino damselfishes, predatory fishes like dwarf lionfish, or snowflake eels, or similar species, like dottybacks nor maybe Assessors.

If you are trying to keep the Royal gramma in as natural a habitat as possible (simulating the Coral reefs of the Atlantic Ocean, for example), Flame cardinalfish, Blue chromis, neon gobies, and the Atlantic blue tang would be great natural tankmates (Michael 2004).

The Royal gramma basslet is a small, generally peaceful fish that only needs about 20-30 gallons of aquarium space as a minimum tank size. Like most saltwater aquarium fish, they tend to be more secure when housed in a tank with live rock to hide behind or within. They also do well when standard reef aquarium water parameters are maintained:

Learn more about the most important reef tank water parameters here. Those water parameters are most easily achieved when you make your own saltwater with a commercial salt mix. You can learn about my preferred salt mix here.

There is no sexual dimorphism shown between male and female Royal Gramma Fairy basslets, which basically means you can’t tell them apart just by looking at them (Wittenrich 2007). Once they begin to bond, the male fish is generally larger than the females, and the shorter females may look a little more swollen in the gut area if they indeed have ovaries full of ripening eggs.

Gramma loreto is a cave-spawning saltwater fish that tends to reproduce in harems--one male tends to spawn with several females in a nest that the male makes, in a cave, from macroalgae--or any other similar material that is available to them.

A female will lay approximately 20+ eggs at a time (Wittenrich 2007). It takes the eggs about 7 days for the larvae to be ready to hatch. As is the case with most saltwater fish, egg hatching is affected by temperature. Warmer temperatures will result in faster hatching, and the opposite is true for colder temperatures. The natural breeding season is January to June, with some reports of activity lasting into early Fall (Michael 2004).

Since the eggs were laid over several nights, hatching of the eggs, similarly, takes place over multiple nights--making them slightly challenging fish to breed and also making them ideal candidates for a larval snagger, since the larvae generally hatch at night and can be collected with a larval snagger without a significant amount of human intervention.

Larval snaggers work like this--most larvae and other zooplankton, for that matter, tend to be phototropic, which means they are attracted by the light and will swim to the light. Therefore, the collection of the larvae works best when the tank and the surrounding room are dark. The larvae will then swim towards the light and can be sucked (snagged) into the trap. It sounds violent, but it is not, or you are doing it wrong.

The newly hatched larvae are fairly large, by reef aquarium standards, and can be fed rotifers.

Even though I noted earlier that the Royal gramma fish is a harem spawner, it is generally best kept as a single fish in the home aquarium because aggression is highly likely between fish of the same species. I have witnessed this first-hand. I suspect the aggression was between two rival males, but I can’t really be certain. 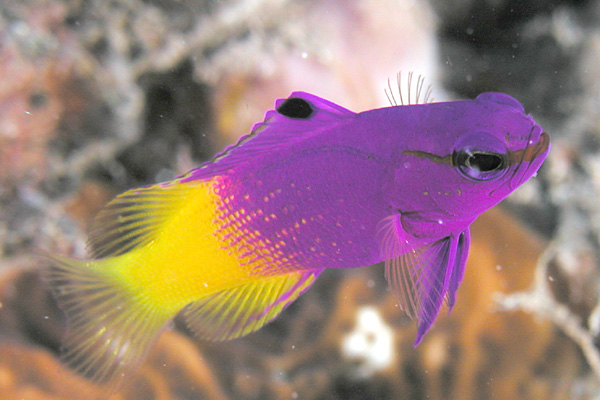 It is recommended that you have a tight-fitting lid on your saltwater aquarium to prevent your new Royal gramma fish from jumping when startled. This is not a unique behavior to this species. Many different fish species are known to jump out of the water when startled.

How many Royal grammas in a tank?

The best general advice to keep aggression down in a saltwater aquarium is the one fish per fish family, per tank rule, since aggression is common between two similar fishes. That advice holds reasonably true with Royal gramma fish, too, although it is possible to keep a small group in your tank.

As mentioned before, Royal Gramma basslets are harem spawners in nature, meaning one (relatively larger) male will mate with multiple (relatively smaller) females. If you plan to keep more than one in a tank, it is best to try to replicate that social structure, by adding one larger fish with a few smaller fish, at the same time so that each individual has a chance to establish their territory simultaneously. Personal experiences with more than one Fairy basslet at a time

I will share that my personal experience trying to keep a group and establish a breeding harem was met with a lot of aggression. Eventually, the group settled down, but only after agreeing to chase one to within an inch of its life. Not sharing that as a typical experience, just a personal experience, candidly.

Alternatives to the Royal gramma

I personally love this boldly colored saltwater fish, but I also know it’s not the right fish for all situations, tanks, or personal tastes. So here are a few other similar fish you could consider.

If you’re interested in a fish with a similar look (torpedo shape, prominent purple coloration, you may want to learn more about the Purple tang or the orchid dottyback. Or if you like that torpedo shape and the vibrant yellow, you could consider the Midas blenny or the Yellow coris wrasse.

Or if you’re interested in a different basslet, you could consider the Chalk bass or Blackcap.

The Royal Gramma is one of my all-time favorite saltwater aquarium fishes. It is a great addition to the beginner or advanced aquarium and will liven up just about any tank with a flash of color and cool behavior.

For more information about breeding this fish, I recommend you check out The Complete Illustrated Breeder’s Guide to Marine Aquarium Fishes.

Where to go for more information

As mentioned earlier, the royal gramma fairy basslet will get along with most other community fish tank mates. To continue learning about other hardy saltwater aquarium fish compatible with gramma loreto, check out these other care guides:

To dive deeper into this fish, check out this video all about the royal gramma basslet.

All About The Royal Gramma Basslet

Written by Albert B. Ulrich III--author of The Reef Aquarium Series of books:  The New Saltwater Aquarium Guide, Reef Journal, How to Frag Corals, 107 Tips for the Marine Reef Aquarium.