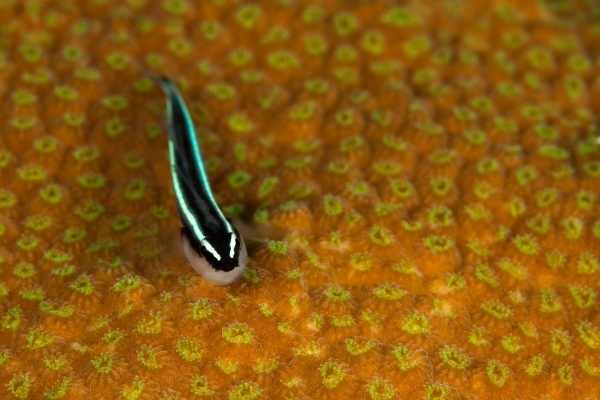 The Neon gobies are some of my absolute favorite saltwater fish of all time. They are small, with over-sized personalities,  aquacultured and inexpensive, but not ubiquitous.

Quick facts about the Neon gobies

There are actually several different species of neon goby:

They are well-suited to life in a home aquarium

They require reef aquarium water parameters, made from mixing freshwater with a reef salt mix. You can learn more about those here. Is it me, or does this neon goby look scared? Don’t worry, we won’t eat you 🙂

Where my personal obsession with caring for the Neon goby begins

My affair with the Neon Goby began the same way as many affairs do in this digital age—as a late-night online romance. I first noticed the pair while browsing Ebay. There was a mated pair of Neon gobies listed for sale by a diver in Florida. On a cold winter evening in January, I clicked the ‘BUY IT NOW’ button, selected a few additional items to distribute the cost of shipping, and the pair was packed up with an eclectic mix of sea life to begin their 24-hour journey to the Philadelphia suburbs. The Neon goby pair had a seat in the cargo area of a Federal Express plane, along with a pencil sea urchin, a condylactis anemone (complete with a symbiotic anemone shrimp), an orange ricordea, and a cluster of cinnamon zoanthids.

The Neon goby pair, living up to their species reputation, began spawning about 2 weeks after introduction into my tank (not even long enough to have officially cleared ‘quarantine’, had I not been using a dedicated tank), and would continue to spawn exactly on every 10th day for a few months.

But unfortunately, the spawning stopped as quickly as it started.

I clung to hope and watched for months—hoping, waiting, and checking for any sign that a spawning event was on the horizon, but they never spawned again. I estimate that nearly 3600 Neon goby eggs made their way from the breeding tank to the grow-out tank. While it took almost no effort on my part to encourage the pair to spawn in there, I did learn several important lessons about marine fish breeding that I would like to share with you.

Starting out with a mated pair sped things along

As mentioned earlier, this adventure started with a wild-caught mated pair shipped to my house.

The upside of purchasing a mated pair is:

The downside of purchasing a wild-caught mated pair is:

When breeding, the pair will prefer a certain type of substrate (be ready to offer a few options)

The Neon goby is a substrate cave spawner, which means they lay their eggs on the wall of a cave. In a home aquarium, and if your intent is to breed them, a short length of PVC pipe works great as a cave. The early spawning attempts all ended the same way—with the pair (presumably the male) eating the eggs a few days before they had fully matured and hatched.

As soon as I added a ¼ inch diameter PVC pipe to the tank as a nesting option, the pair left their ½ inch diameter home and took up residence in the new tube. Every spawn after the switch hatched out. It appeared that providing the gobies with a few options of suitable spawning structures improved the likelihood of full-term egg development.

My conclusion is that the 1/4-inch pipe was the best–but the next time I try to breed the Neon goby, but it is also fair to note that this was not a scientifically controlled experiment. It very well could have just been that the fish needed a few spawning attempts under their piscine belts before they figured out exactly what they were ready. My advice to you would be to offer a few different sized options and let them select the size that works best for them. I had significant improvements in the survival rate (measured in # larvae alive for more days) of the Neon goby larvae when I switched from an opaque, oblong container to a black round tub. My original grow-out tub of choice was chosen because it was size/shape that would allow me to put the spawning nest (inside a small diameter PVC pipe) diagonally upright with an air stone placed at the bottom to create a gentle, upward flow until the eggs hatched. I knew that water flow would be critical to keeping the eggs viable once removed from the attention of the hovering male. What I didn’t realize, at the time, was that it is actually pretty easy to create an upward current through a PVC tube, in any kind of a tank. Switching to a black round tub provided two advantages over the original tank: the black color provided a dark contrast for the larvae to sight their prey organisms (Wittenrich 2008); and the round shape provided an efficient, circular flow in the tank which appeared to distribute the prey (and larvae) evenly throughout the tank.

I found out that the heater I was using, while rated for a volume of water much larger than was actually being used, was ineffective at keeping the temperature stable. I had a lot of critical casualties from a malfunction before I realized the heater wasn’t working properly. As soon as I replaced the heater, those problems went away. Be sure to monitor your temperature regularly, and don’t buy a cheap heater. Don’t try to keep every batch of larvae

With a few months of learning curve under my belt, I was able to keep more larvae alive for longer periods of time, and for the first time, I was having success with more than one batch of larvae at a time. At one critical point, there were two groups of larvae, from eggs laid 10 days apart, growing out in separate black round tubs, while the third cluster of eggs was ready to hatch.

The problems I faced were that I didn’t have enough gear or enough time to manage three tubs of Neon goby larvae. I took a few shortcuts, was unprepared, and made a catastrophic mistake. Rather than buy and set up an additional air pump for the third grow-out tub, I just spliced the air supply line one more time.

I awoke in the morning to find all three tanks nearly void of life—no doubt suffocated from the lethal cocktail of reduced oxygen/water flow and increased oxygen demand (from all the larvae and food organisms). The bottom line is this—until the third batch came along, I had achieved my greatest success. The workload was about all I could handle—both from a time and resource perspective. The third batch set me back irrecoverably. I had insufficient time and equipment, I cut corners, and I lost all three batches. While breeding and rearing larvae through metamorphosis are somewhat of a numbers/probability game, trying to keep every hatch actually reduces your chances unless you have unlimited time, space, and equipment. Take your time and don’t count your Neon goby larvae before they have hatched.

Leave the light on

Motel 6 advertises that they leave the light on for you, as a reason to stay with them—perhaps their target market segment is marine fish breeders, but this is the last important trick I employed to help improve the survival of the fragile newly hatched larvae. In those first hours after hatch, the larvae must learn to locate, capture, and eat their first food.

Since Neon goby larvae generally hatch just after lights-out, the first natural chance of finding and capturing prey is in the morning—perhaps 8-10 hours after hatch. While some marine species, like clownfish, have a rather large egg yolk still remaining after hatch, the neon gobies appeared to have almost none, which means they need their first meal rather quickly after launch.

I had much better results when I angled a flashlight over the grow-out tub for the first week than when I did not. After my initial attempts at captive breeding the Neon goby, Elacatinus oceanops, I had less success getting other pairs to spawn. One truly frustrating aspect of husbandry for this fish is that they are not long-lived fish. There really isn’t all that much time between maturity and old age. But the Neon goby is a functional and fantastic beginner fish for any interested saltwater aquarium hobbyist. They are a perfect saltwater fish for any size saltwater tank, including nano and pico tanks.

Over the years since my initial work with the Neon goby, copepods have become much easier to purchase, which should boost survival rates compared with what I was getting by using rotifers.

If you are interested in other saltwater aquarium fish that breed relatively easily in a home aquarium, check out these articles:

Written by Albert B. Ulrich III–author of The Reef Aquarium Series of books:  The New Saltwater Aquarium Guide, How to Frag Corals, 107 Tips for the Marine Reef Aquarium, and Reef Journal.