The maroon clownfish (Amphiprion biaculeatus) is one of the most popular and iconic reef tank fish. They consistently rank in the top 20 saltwater fish species with their awesome maroon red coloration and the iconic white or gold stripes. A few “designer” varieties of this fish are also available from ORA Farms under the names lightning maroon and gold striped, though they command higher prices than the original. But there are some quirks to this species, and if you aren’t aware of them? You could find yourself regretting your impulse purchase. Description of the Maroon Clownfish

When it comes to size, maroon clownfish come out on top (at least among clownfish). Females can reach an impressive 7 inches (17.7cm) in the wild, dwarfing their male partners. And when they reach maturity? It comes with a notoriously bad attitude. Even in bonded pairs, if she decides to have a bad day (or week or month), she can turn on the mal and harass him – sometimes to the point of death!

No one can deny these clownfish are gorgeous to behold, though. Unlike the orange shade most people think of when you mention “clownfish,” maroons have deep red scales between those three white stripes you expect to see. They also have a spine within their cheeks – something you won’t find in the rest of the clownfish family. It’s where that other common name – spinecheek – comes from. (Okay, so not everyone uses imagination for names)

Speaking of names, the maroon clownfish underwent an overhaul regarding their scientific name in May 2021. Scientists have always argued that they share plenty of qualities with the Percula Complex of clownfish (this is the group the ocellaris clownfish – one of the most recognized in the group – belongs to). Cross-breeding between maroon and common clownfish happens now and then. The resulting fry develop orange-red colors, and they’re sold as designer varieties under the name blood orange clownfish.

And after the ENDLESS genetic debate, they concluded that the Premnas genus wasn’t as unique as originally believed. So maroon clownfish received the shiny new scientific name of Amphiprion biaculeatus – at least until the next round of questions and fighting erupts. Maroon clownfish tend to live about 3-7 years, on average. Now, before you get excited, keep in mind that your individual fish may not live an average life. It could die much older (some saltwater species live upwards of 17-20 years) or younger. That 3-7 year range is a rough estimate of what to expect from a healthy “typical” experience, based on ideal living conditions.

Maroons are hardy fish and tolerant of moderate changes in water chemistry and parameters. Try to keep water in stable conditions to provide the best and most healthy environment, though. As for the tank size, a single maroon clownfish requires at least 30 gallons (114L) of living space. And if you have aspirations to keep a pair, you’ll need a tank that is 55 gallons (208L) or larger.

Regardless of the size of your aquarium, once you add your maroon clownfish, they consider the entire tank THEIR territory. And they WILL defend it! If you’re planning to keep a pair, be sure to provide them with space and ample hiding places within the live rock. This will allow the male to escape the aggression of the female. Otherwise, you may end up with one lonely female. (Well, perhaps not LONELY, but she will end up alone) 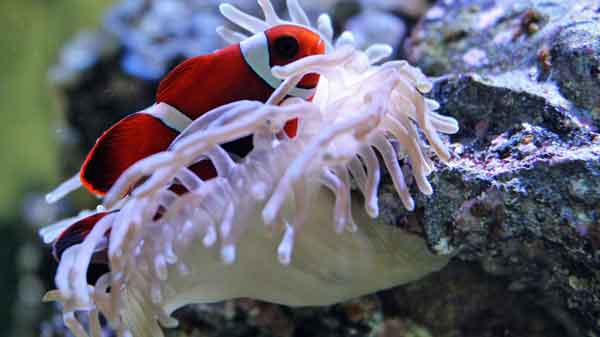 Maroon clownfish are not picky fish, making them easy to feed. In the wild, they mainly eat zooplankton. In the home aquarium, they’ll eat just about anything you choose to offer them:

I recommend you try to feed your fish 2-3 times a day, if possible. You CAN keep them relatively healthy with a single, sufficiently sized feeding if life gets in the way. It isn’t the most ideal situation in the world, but maroons are some of the hardier members of their group, and they’ll handle the change without a problem. Keep an eye on their temperament, though – something we’re going to discuss now.

Maroon clownfish are one of the most aggressive and territorial species of clownfish. They are notoriously territorial and should be the LAST fish you add to the tank, if possible. If you place them in the aquarium first, they’ll claim every last grain of sand as theirs. And that means they’ll view the rest of the fish you integrate into the tank as invaders. Given their impressive size and that cheek in the spine? You could find issues with fish getting injured. And even those that manage to squeak away from your maroon clownfish could risk starvation or infection due to the stress of the harassment.

Aggression is one of the biggest troubles faced by aquarists that take on maroon clownfish. Providing space for everyone in your display tank helps, but you also want to think through the order in which you add all of your species. Maroons that go into the “pool” last will remain calmer as they won’t view the entire tank as their property. Clownfish and sea anemones are like peanut butter and jelly: you simply don’t see one without the other. The symbiotic relationship provides protection to the fish, while the anemones benefit from pest control from the fish. As each species gains something positive, it’s considered a form of commensalism.

And maroons are no exception. In the wild, maroon clownfish usually pair up with the bubble tip anemone (Entactaea quadricolor). However, they can also decide to form relationships with (less commonly):

A Word of Caution About Sea Anemones

Many new aquarium owners get their first tank courtesy of seeing clownfish (either snorkeling, diving, or on a trip to the aquarium). They imagine themselves with a clownfish pair, swimming in and around an anemone. The problem with that ideal vision is that most anemones grow slowly in the open ocean, are wild-caught, and have a TERRIBLE track record of success in the hobby (although I haven’t seen any specific, reputable, recent reports about that).

If you have your heart set on an anemone for your clownfish, check out the bubble tip anemone (Entacmaea quadricolor). They do relatively well in captivity and are often fragged by aquarists once they get large enough. They are also one of the few species that naturally host maroon clownfish in the wild.

However, clownfish DON’T need an anemone to remain happy and healthy in your tank. In fact, most people do keep anemones in their tanks. Their maroon clownfish do fine. As the fish aren’t at risk from predators, they don’t need to rely on the protections afforded by the anemone.

Should You Keep Maroon Clownfish in Pairs?

You know you need to keep an eye on the aggression level with your maroon clownfish – especially in the female. And you often see pairs in the wild. So you probably feel obligated to purchase and house a mated couple, assuming the risks. But you don’t have to keep maroon clownfish as pairs. The choice is up to you.

Keeping a solo fish actually helps reduce the amount of aggression. You won’t see their pairing and bonding behaviors, of course (part of the charm in keeping them in a home aquarium), but you also won’t have to fret over whether any of your fish – including the male – are getting harassed. It’s a pro and con situation you’ll need to weigh for yourself.

If you plan to keep a mated pair of maroon clownfish, the traditional advice is to pair a large fish with a small fish. (I know, that sounds obvious, but there’s a logic to this argument)

Clownfishes are protandrous hermaphrodites. This fancy, technical term explains how they change gender in one direction. All maroons start as males but can change gender to become female with appropriate social cues.

The female is the larger and more dominant of the two (as we’ve touched on). If you introduce two similarly-sized juvenile males, you run the risk of the two fighting to the death (or at least the significant detriment of one of them). If, however, you introduce a large and small fish, the lopsided battle for dominance will end swiftly and with less damage to the losing male. If you can establish a pair (without losing the male) and provide them with enough space, maroon clownfish are moderately easy to breed. A healthy, well-fed pair spawns on a routine interval: every 4-6 weeks. Although individual pairs will establish their own pattern.

Courtship takes place about 3-5 days before the actual spawning. As they begin their courtship ritual, the maroon pair will clean a rocky area near their chosen anemone to provide an adequate place for the eggs to adhere to. (If you don’t have an anemone, they’ll choose another spot – so don’t panic) They display an intricate “dance,” including leaning towards each other, touching various parts of their bodies, and head shaking.

Once laid, it’s fascinating to watch the parents (mostly the male) tend to the eggs. The behavior’s similar to a freshwater cichlid (not one of the mouth-brooders, though). The eggs and larvae are large (relative to most saltwater fish), so they come out on the easier end of the spectrum in terms of ease of feeding after hatching. The eggs hatch in about a week. Once you’re hooked on clownfish, it’s tempting to envision an entire tank filled with different species and varieties, with their various colors and patterns. And it DOES sound amazing. But you need to refrain. You CANNOT keep maroon clownfish in the same tank as any other clownfish species! Remember that aggression problem? It extends to other members of the “family.” If you add other clownfish, even from different genera, there’s an excellent chance the other clownfish will end up killed by the maroons.

As I touched on in the introduction, you can come across a couple of designer maroon clownfish out there these days. They’re newcomers to the industry but already every bit as popular as the original. And while you’ll need to pay a little extra for the genetic manipulation of the designs, they’re not that tricky to locate. The designer varieties available: the gold striped maroon clownfish and the lightning maroon clownfish.

Gold stripe maroon clownfish come in a touch smaller than the original species, though they’re still impressive in a reef tank. You’ll see them reach around 6 inches (15.2cm) at full size. Some people may not consider these clownfish a designer option anymore because of how long they’ve been available. They’re a trendy color variant, all the same. And if you want to add a touch more to your tank, you may want to look for them.

The lightning maroon clownfish is a designer variant that took the hobby by storm (pun intended, of course). They get their name because their stripes have an erratic, chain, or electric pattern to them. The “lightning” part of the name came from the fact that many people felt the stripes looked like streaks of lightning bolts down the fish’s bodies. And no two fish ever look the same! As the fish mature, the patterns grow more intense, standing out against that stunning maroon color.

Everything else about the care and aquarium conditions applies to them the same. And these maroon clownfish come out to the same size as the gold stripe variety. They’re on the rare side if you’re looking for them, and those unique patterns make them more expensive. But you can’t argue that lightning maroon clownfish make for stunning display tank additions!

Who doesn’t want to continue learning about maroon clownfish? If you’re still on the fence, this can help you make a final decision.

Watch this YouTube video to dive deeper into caring for maroon clownfish:

Check out this article on breeding clownfish if you’re interested in trying that (Hint: this works for any clownfish species).