What are brine shrimp?

The non-scientific short answer: brine shrimp are fish food that will drive your reef fish crazy.

When fully grown, they are about 0.4-0.5 inches in length (about 1 centimeter)–which means they are totally bite-sized for almost any of your saltwater fish.

Newly hatched brine shrimp, called nauplii, do not eat. They hatch from their cyst/egg with a relatively large yolk-sack attached and deplete that first.

Adult brine shrimp are filter-feeders, which means they swim through the water and eat whatever is suspended in the water column.
Wild brine shrimp commonly eat phytoplankton. 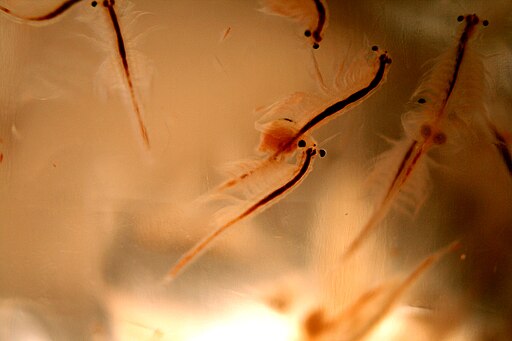 When grown specifically for food, they are often fed even tinier yeast cells. When I was growing them out for feeding my baby clownfish, I fed them with nutrient-dense phytoplankton, because I wanted to fill their little guts full of the stuff, so that my clownfish would get the benefits, too.

You can learn to grow your own phytoplankton at home here.

Reading up on this, there are mixed reviews about what is recommended or ideal.

According to Wikipedia, the optimal salinity level for brine shrimp is about 30–35 g/L but since many other organisms that would consider the brine shrimp a tasty morsel also think 30-35 g/L is a great salinity level, they are often found inhabiting much more hostile salinities (60-80 g/L or more).

So swimming around in your tank water is a walk in the park…which is a terrible analogy, because that would be extremely difficult for a brine shrimp to do.

According to brineshrimpdirect, a company dedicated to selling brine shrimp cysts for the aquarium hobby, the recommended specific gravity for hatching brine shrimp is 1.018, or 25 g/L, which is actually less than what is otherwise reported as ideal.

I speculate that the reason they recommend a salinity level that is lower is that…close enough is good enough in this case–and if you look at the economics of using a lot of extra salt, vs. hatching a few more cysts, you’d be better off just buying and adding more cysts.

The other conclusion you can make here is that you don’t have to be too precise when making up your water. Close enough will likely be good enough.

I’m conflicted about whether or not the brine shrimp life cycle is complicated…or expected. As far as tiny invertebrates go, I suppose it’s expected and not unusual, but for such a tiny creature, there really is a fair amount of intricacy…which is cool.

Technically speaking, when having dinner with your invertebrate scientist friends, please note that there are 14-17 different stages in the artemia life cycle. Practically speaking, for those of us in professions that don’t depend on that specificity and expert knowledge, there are 4 major stages (with a bunch of intermediate stages in between. Those are:

Hatching brine shrimp from cysts is relatively easy to do. Given the right water conditions, the cysts want to hatch.

To view your newly hatched nauplii, shut off the air pump, to allow the water to settle. Move a light or flashlight close to the container. You can do this with just about any light, but the key here is that you want it to be relatively bright and you want the point of light to be relatively small/concentrated in a small area…because…the brine shrimp will travel to the light.

The best spot to point the light is somewhere below the waterline because the empty cyst shells will float and the brine shrimp will swim down to the light.

To remove the nauplii, just suck them up with a turkey baster or start a siphon with a length of airline tubing.

A few points to consider about what makes an ideal brine shrimp hatchery (the container you plan to hatch the shrimp in).

The ideal shape, for water flow and siphoning out the little snacks for your fish, is conical. You ideally want it to be wider across at the top than it is at the bottom.

The ideal brine shrimp hatchery also has a way to suck the nauplii out without getting cysts by accident.

Both of these design features will help you to target the tiny, swimming invertebrates while minimizing the number of unhatched cysts or empty (hatched) cyst shells, which will just look messy, floating around in your tank.

If you want, you can purchase a brine shrimp hatchery online. There are a surprising number of options available today:

DIY stands for ‘do it yourself’. You can make your own brine shrimp hatchery yourself out of just about any plastic container. I’ve hatched them in a simple, plain sports drink bottle sitting on a counter, and I’ve even made my own, based on a design described in detail in Joyce Wilkerson’s Clownfishes book (an awesome book, by the way, and totally recommended reading).

The basic premise here is that you cut the top of the soda (also called pop in some areas) bottle right around the point where the bottle starts to taper towards the top. Now you have a rounded bottom bottle that securely will sit on your counter. Put your airline in…and voila.

You can learn more about how to build a DIY brine shrimp hatchery here.

This next model, manufactured by San Francisco Bay Brand, is basically a stand and airline tube that is designed to fit with a 2L soda bottle.

Check out the price online

Some assembly (and extra parts) are required here–because you need to drink your own bottle of soda and cut off the bottom of the bottle. Inverting that bottle and securing it in the stand creates an inexpensive, roughly conical shape.

It’s a good option, has been around for years, and doesn’t cost too much. However, you might also wonder why it costs as much as it does, for such a relatively simple and small piece of plastic.

It tends to not get great reviews, because even though it’s the lowest cost model on the market, it still feels like not a great deal…because you have to get your own soda bottle anyway.

This model features a conical design, with a stand and a valve at the bottom of the tank, to make it easy for you to suck out the nauplii from the bottom. Just aim your light at the bottom and watch them swim down to the light…and suck them out, once they’re concentrated in a small area.

This is my favorite design because it is so easy to use.

A brine shrimp net is simply a small net with a mesh size (the size of the gaps between the strands of netting material) that is small enough to catch the brine shrimp in it. This is a good thing to have because the hatch out water can become fouled and messy. You want to strain the water through the net to catch the shrimp but leave the dirty water behind.

Bet you didn’t know that…

If you’ve never done it before, hatching your own brine shrimp can be fun. It’s a science project, all on its own, and it is easier to do than to bake some brownies. Plus, it’s a live food that your fish and corals will love to eat. If you’ve done it before, but haven’t lately, why not? When was the last time you gave your fish and corals some live food? Why not give it another try. Oh, and by the way, now that you’re done feeding your fish, why not take that suggestion and make some brownies too?

Cover image modified from a creative commons image on Flickr you can find here: http://flickr.com/photo/[email protected]/2844629538