The Blue devil damselfish is a gorgeous and insanely popular saltwater fish. In fact, a few years back, it was the #2 most imported fish. They are small, beautifully colored and as inexpensive as saltwater fish get.

It can be challenging, at times, to tell the difference between different species of damselfishes--and the blue devil damselfish can be particularly problematic, because the same species of fish can look quite different, depending on what part of the world they are from.

As their name implies, the blue devil damselfish does have a dark side. We’ll explore the good and the bad aspects of keeping Chrysiptera cyanea in this article.

Like many other beloved saltwater fishes, the blue devil damselfish comes from the reefs around of the Indo-Pacific Ocean. Their preferred location is in the shallow lagoons or reefs, usually found near coral where they can quickly retreat if threatened. The colorful Blue devil damselfish is a hardy fish that adapts quite well to aquarium conditions. If it’s suitable for other reef fishes or corals, it will likely be suitable for this fish.

Due to their relatively small size as adults (about 3 inches), they don’t require a large tank. Anything around 20-30 gallons should be sufficient for a single damselfish in a tank.

This is a bold species that will be out-and-about in your tank, staying close to liverock or the substrate and zipping in and out of rocks for cover--and defeding their territory from others that travel in.

Although they are tiny in size, the blue devil damselfish is quite large…in aggression. While the fish is otherwise perfectly suited as a beginner fish, it is best to just keep looking, if your goal is to have a peaceful community tank.

If, on the other hand, your ideal tank setup has a small shoal of these aggressive electric-blue fishes, my advice is to use the same strategy I used for stocking aggressive freshwater cichlids, back in the day.

The theory for stocking aggressive fishes goes like this--fish tend to establish a pecking order or dominance structure. If you have two aggressive fish or one aggressive and one non-aggressive fish, chances are good that the most aggressive of the two will spend the majority of their time letting the less dominant fish know they are in charge.

If you have one dominant and two submissive fish in the tank, the dominant fish will split their time harassing the other fishes. This math would theoretically continue until the aggressive fish is no longer able to keep it all straight. So while it may seem counter-intuitive, a group of 5-7 damselfishes will likely behave better than 1-2, because the aggression gets spread out among the group, which reduces the likelihood that a single fish gets attacked enough to cause serious injuries.

That approach doesn’t always work but is certainly something to consider, if you are thinking about adding a blue devil damselfish or any other damselfish to your tank.

If you are going to add a shoal of damsels, you will want to have a tank that is 55-gallons or larger in size.

They are territorial so make sure to place them in a large tank. A large tank is especially important if you plan to house other fish with them. For a single fish set-up, you can go with a minimum of 30-gallons. If you want a community tank, then you should go no lower than a 55-gallon tank, but a 100-gallon is safest. In some cases, a mated pair of Blue Devils can live peacefully in a 30-Gallon tank, but this is not recommended as aggression can easily pop-up later on.

There was also some evidence, years back, that adding cleaner fish to a tank helps reduce the number of aggressive attacks.

Compatibility with the blue devil damselfish

Compatibility is one of the more challenging issues when planning for the blue devil damselfish. As mentioned earlier, this species is aggressive, which makes it difficult to add to a community tank.  These fish will harass others that swim into their territory, making it a stressful living situation for the other fish.

They are also bold and aggressive feeders, which means you should not keep them with more timid and bashful eaters, like jawfish or any of the popular mandarin goby species (green spotted, blue, red, etc.).

However, unlike other aggressive fish, like eels, puffers, lionfishes and triggerfishes, Chrysiptera cyanea is tastily bite-sized, making them an equally bad fit for those larger aggressive fishes.

They are, technically, reef-safe, in that they won’t bother your corals or other invertebrates.

The sweet spot here is to house them with other small, but aggressive fish species. Certain dottybacks, other damselfishes, or fast swimming wrasses, like the six-line wrasse or Hoeven’s wrasse, etc., 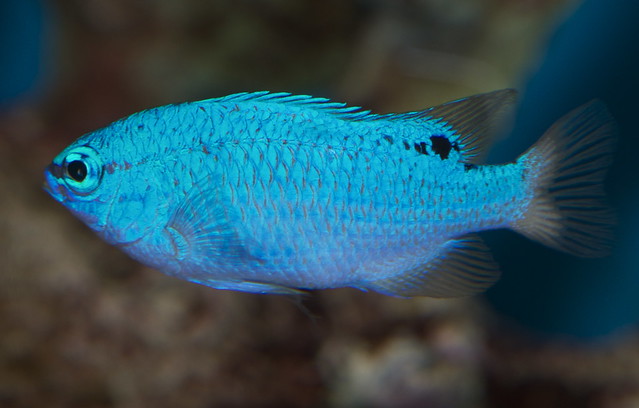 Like males in my own family (myself included), it seems that the blue devil damselfishes also get even more cranky (territorial?) with age. So keep a close eye on them when they reach their golden years.

Scott Michael recommends (in Marine Fishes) keeping a single male with a few females as the maximum size of a group. Aggression is more likely between two males in the tank.

One final note about compatibility--recall that by nature, this fish is likely going to be relatively substrate attached, meaning it will stay call ‘home base’ part of the rock structure in your tank. When choosing tankmates, you will want to avoid adding other substrate attached fishes that will be seen as a threat (clownfishes, etc.), but may have better luck with open water swimmers or fishes that will occupy an unrelated niche in the tank.

Breeding, reproduction and sexing in the South sea demoiselle

While I spent most of the time here talking about the aggressive nature of the blue devil damselfish, they apparently do have a softer-side, because they do pair up and spawn in captivity relatively easily, by saltwater aquarium fish standards. However, you might have guessed that spawning devils have even more incentive to be aggressive.

The greater challenge with breeding these fishes is raising the larvae, which can be quite small and therefore more challenging than some other larger larvae (like clownfish larvae) to feed and grow through metamorphosis.

It may be worth all the aggression and drama to witness the courtship dance (swim) in your tank of a male enticing the female back to the chosen spawning location. The female will often go to see the male multiple times right before they mate. If the male accepts the female’s interest, then he will perform a mating dance for her. Spawning itself is similar to other substrate spawners, like clownfishes, where the female lays eggs on the walls and ceiling of the structure, allowing time for the male to fertilize in-between batches’.

The male guards the nest of eggs for about 4 days until they hatch.

To learn more about breeding damselfish, I strongly recommend you pick up a copy of The Complete Illustrated Breeder’s Guide to Marine Aquarium Fishes.

Despite the Blue Devil Damselfish’s aggressive nature, it is an omnivore, not exclusively a carnivore. This species prefers to eat a mixture of food types making them an omnivore. C. cyanae will happily eat anything from algae to fish eggs in the wild. The tank is no different, and you can feed them a mix of flakes and meaty foods. Frozen or shredded meat is a great choice to balance out their diet. You will need to feed this species around two times a day and make sure they are eating well. Be aware the missing feeding times can cause the C. cyanae to become aggressive towards tank mates.

If you are trying to get them ready to spawn, feed a high calorie, meaty diet with blackworms, mysis shrimp, brine shrimp, grated squid or shrimp.

The Blue devil damselfish is the #2 most important fish in the United States. So according to the law of big numbers, it is likely available wherever you plan to buy your saltwater fish.

They are also so inexpensive, and so brilliantly blue colored that they tempt the casual hobbyist who is just window-shopping.

Whether to Buy a Blue Devil Damselfish or Not

The blue devil damselfish is a gorgeous, hardy and inexpensive saltwater fish species that will survive brilliantly in almost any marine aquarium. The biggest concern is for the other fishes you hope to add to what will quickly become THEIR TANK (not yours).

They are relatively easy to spawn and will eat whatever food you offer them, but aggression gets worse over time and seriously limits your options. The only real option you have here is to create a small aggressive species tank. If that’s what you’re in the market for, then this is a great choice. If you are otherwise scared of the costs of a saltwater tank and want to prove you can keep some fishes alive, this could be an option.

If you want a peaceful tank full of a range of amazing fish species, you should probably pass over this almost too cute to pass up fish.

If you’re planning to keep damselfishes in your tank you may want to read up on how to deal with aggression in a saltwater tank--to have a few tricks up your sleeve in case these little devils act like…well you get the point.

The Truth About DAMSELFISH - Livestock Series