Are you looking for a great saltwater fish to add to your saltwater tank? Ask your local fish store to order you a male Melanurus wrasse, the best-kept secret in the saltwater aquarium hobby

Why is the Melanurus wrasse so amazing?

Here are 7 reasons the Melanurus wrasse is an amazing fish to keep in your saltwater aquarium:

Or maybe you’re just looking for some quick answers to common questions about keeping Hoeven’s wrasse. If so, click these links to jump down to get the answer to your question.

A quick note about common names

The Melanurus wrasse is also commonly called Hoeven’s wrasse and the Tailspot wrasse, so you will see those three names interchangeably in this article. Each time, the common name is referring to the very same species, Halichoeres melanurus.

Look at the stunning coloration of the Melanurus wrasse

Don’t take my word for it. Take a look at these pictures, and even the pictures don’t do this fish justice. The adult, male Tailspot wrasse it typically wrasse shaped (torpedo-shaped?) and has an amazing blend of turquoise blue and green colors on the main part of its body along with red, horizontal maze-like stripes from head to tail. Unlike some of the larger angelfish species which start out as brightly colored juveniles and turn into drab colored adults, Hoeven’s wrasse grows into its color. Adult male Tailspots are generally thought to be more beautiful so it might be worth purchasing a fish with known gender if you want to get the best-looking fish for the money. 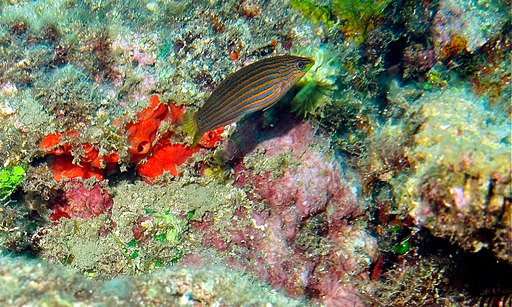 This is generally available as a wild-caught fish, but it has a good survival record and generally does well in captivity.

Eats well and acclimates to life in an aquarium

One of the reasons it does so well in an established reef aquarium is that it has a voracious appetite and learns to eat commercial foods.

There are many reports online of aquarium owners who say the Melanurus wrasse will not eat cleaner shrimp.

Will the Melanurus wrasse eat nudibranchs?

Yes, smaller Melanurus wrasses will eat Montipora-eating nudibranchs, as well as flatworms and parasitic pyramid snails. Some nudibranchs may be unpalatable and not eaten.

This fish is a fast-growing eating machine. Juveniles are often purchased in the 1.5 – 2-inch range, but they quickly grow to their full 5-inch adult size in about 3 years.

This fish is packed with personality. During the daytime hours, you will see it zipping in and out of all the rock work, hungrily looking for something to eat. Then, when the Tailspot wrasse is ready for bed (or if it gets sufficiently scared), it burrows into the sand.

How cool is that?

Oh, by the way, since it buries in the sand, make sure to pick a fine grain sandy substrate.

Hoeven’s wrasses are hermaphroditic, harem spawners. That means that Hoeven’s wrasses tend to congregate as a small group of females along with a single male. Once the male dies, one of the females generally will change gender from female to male, over a period of time, ensuring the reproductive success of the group.

Is the Melanurus wrasse aggressive?

No, the Melanurus wrasse is not aggressive. It is a peaceful, very active, and beautiful saltwater aquarium fish. However, like most other saltwater fish, it may display some aggression towards other wrasses.

Not only is Hoeven’s wrasse all of these other amazing things, but it is also an extremely helpful fish to add to your tank because it will eat parasitic pyramid snails, flatworms, bristleworms, and nudibranchs. Now that is a good deal.

Is the Melanurus wrasse reef safe?

Hoeven’s wrasse is reported to be mostly reef safe. Now, I know that is a bit of a troubling description, because fish are either reef safe, or they are not. I couldn’t find any hard facts about why they are not considered to be fully reef safe.

There are many accounts from hobbyists saying they were great additions to their tanks and were reef safe.

There was one account of an individual having a habit of flipping over snails and nipping at them (but not killing them), and I read one report that speculated that the ‘mostly’ reef safe designation was because the 6-inch adults have large mouths and could, therefore, eat your shrimp. 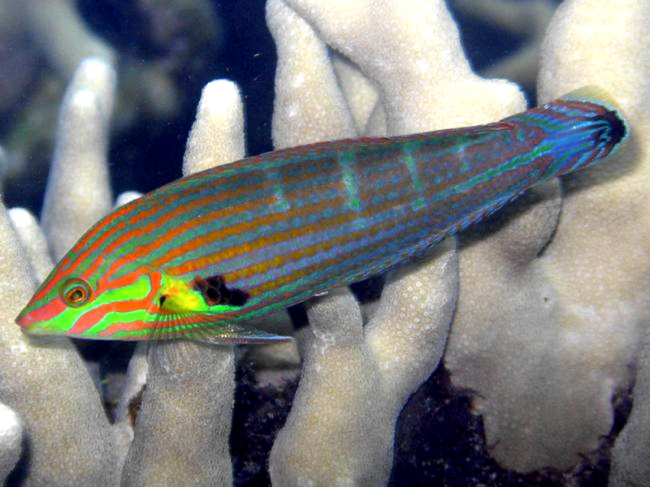 Note the bright coloration of this male Tailspot wrasse. This picture even understates its beauty.

Watch out, they jump.

Like most other wrasse species, Hoeven’s wrasses “like” to surf on carpets, when the lights are out, so keep a tight lid on your tank or make sure you have mesh over your open tank so that he or she can’t jump out and dry out on your carpet.

I’ve lost a few fish that way, over the years. It is a real bummer.

Since they are aggressive eaters, too, it’s best to limit yourself to 1 per tank, because it will use the entire tank as its feeding ground and pick you clean out of tiny, mobile invertebrates, like copepods, amphipods, etc. It is generally not recommended to keep this fish in anything less than ~40-50 gallon tanks.

I’ve been in this hobby for a long time now, but I was slow to notice the Melanurus wrasse. I was well aware of the stunning beauty of some of the other wrasses: fairy wrasses, flasher wrasses (Carpenter, McCosker’s), you name it. I was also aware of the somewhat similarly colored and notoriously troublesome six line wrasse and the ubiquitous but challenging to feed Bluestreak cleaner wrasses.

But somehow Hoeven must have been keeping this one a secret. Well, I hope you get as much enjoyment out of checking out this fish as I do.

If you’re looking for other awesome saltwater fish for your aquarium, check out these other articles:

Watch this video here to learn all about the Melanurus wrasse: