The mandarin goby is arguably one of the most beautiful reef fish you will ever see. Let’s dive a bit deeper into some of the most common questions about keeping this amazing saltwater aquarium fish.

How long do mandarin gobies live?

Mandarin gobies are small saltwater fish, generally reaching only about 3-4 inches in total length with an estimated lifespan of about 10-15 years. However, it is not uncommon for them to live for about 2-4 years in a home aquarium (as long as they don’t starve to death in the weeks after being brought home).

Are mandarin gobies hard to keep?

Mandarin gobies are extremely popular but notoriously hard to keep saltwater aquarium fish. They are peaceful and shy. Feeding them can sometimes be a problem, because they prefer to eat a specific live food called copepods. It is hard to keep enough live copepods in a tank to keep the mandarin goby alive.

What does a Mandarin goby eat?

A mandarin goby eats copepods, a small invertebrate (crustacean) that is a staple of many marine fish species. But unlike other saltwater fish species commonly kept in home aquariums, the mandarin goby often only eats live foods like copepods and occasionally brine shrimp or mysis shrimp.

Yes, mandarin gobies are absolutely reef safe. They are peaceful and will not harm other fish, corals, or invertebrates other than the copepods they eat. It is unlikely that juvenile or adult mandarins eat rotifers in any meaningful amount. Rotifers are sometimes used as a surrogate first food for aquacultured marine fish larvae that are only millimeters in length and have very tiny mouths. But these larvae quickly outgrow rotifers and have to move on to more nutritious foods.

The scientific names for the most commonly kept mandarin goby species in the reef aquarium hobby are Synchiropus splendidus and Synchiropus picturatus. What great choices in name, because they are each splendid and picturesque—don’t you agree?

Why are they so popular?

Their psychedelic coloration is what makes them unique and impossible to mistake for other species. Mandarin fish have scale-less bodies in blue, green, or orange-red, with a wavy pattern that creates a psychedelic impression. Even though many of us call them a (Mandarin) goby, they specifically belong to the dragonet family.  I’m not exactly sure why, but when in doubt, it seems like people default to calling cool, small fish “gobies.”

Mandarin fish have a captivating swimming and hunting style to observe, which only adds to their charm. Their eyes seem to bug out of their heads and dart in all directions, looking for a tasty morsel of food as they hover over the rocks and rubble.

Their primary means of propulsion and navigation are achieved by flapping their pectoral fins. When they do this rapidly, they look a bit like reef hummingbirds.

Here are two mandarins spawning in a reef tank

No, mandarin fish are not aggressive. They are peaceful, slow-moving creatures that are sometimes harassed by semi-aggressive and aggressive fish species. However, these docile, psychedelic and shy fish are notoriously difficult for the beginner saltwater aquarium owner to care for—and often starve to death under the watchful eye of their proud owners.

So, let’s dive a little deeper into the mandarin goby and find out what it takes to successfully care for them in your reef tank.

In the wild, Mandarin Gobies can be found in the Coral Triangle, Malaysia, Australia, the Philippines, Indonesia, the Great Barrier Reef, and the Indo-Pacific Ocean area. They live in shallow lagoons and inshore reefs, especially around rubble beds or dead corals, which offer them protection and privacy.

Standard reef aquarium water parameters will certainly meet their needs, assuming you make your own saltwater with a reputable salt mix or buy from your local fish store and maintain your tank. The mandarin fish is best kept in a mature tank with live rock, live sand, and a refugium. They prefer slower water flow and are picky eaters, so they don’t do well when mixed into the chaos of an SPS-dominated tank or with gregarious and otherwise aggressive-feeding fishes.

The traditional advice is to keep them in a very mature reef tank because they will spend most of their days scouring the live rock and eating the tiny, natural fauna in your tank.

Your Mandarin dragonet will spend its days perched on and hovering just above the live rock, scanning the nooks and crannies for any morsel of food.

Notoriously fussy eaters, most mandarin gobies prefer live copepods and other tiny living crustaceans over almost any other food item, which is why it is strongly recommended to keep this fish with a mature refugium, where natural stocks of copepods can be replenished. They may also accept live mysid shrimp, baby live brine shrimp, also called artemia, and other meaty foods, like black worms. Mandarin Gobies are very peaceful fish that will never show aggressive behavior or get into trouble. Actually, it seems that other fish won’t even pay them great attention. On the other hand, they are very likely to act territorial towards their own species, so only consider keeping a single fish or a mated pair--males will attack other males.

Harems (one male with more females) have been successfully housed together, so this may also be an option but is potentially best left to the advanced aquarist or would-be breeder.

Because they are shy fish, they like to have a lot of hiding places to feel secure. They like to stay hidden between rocks during the daytime, but they may come out occasionally and hop through corals. They should be kept with other peaceful fish of the same size, as they cannot compete for food very well with larger ones.

They are not common prey among predator fish, although some scorpionfish are known to attack them from time to time, especially during mating times.

If they feel threatened, they may bury themselves in the sand, according to Scott W. Michael in his book: Marine Fishes.

You should also reconsider keeping these fishes if you also have an anemone, like the Bubble tip anemone or Rock flower anemone. This slow-moving and docile fish has been reportedly eaten by anemones, even though they have that protective slime. A mandarin dragonet would make great companions with Pipefish or Firefish.

Now that you know these are delicate fishes with particular feeding requirements--it is important to consider some of the following characteristics below to ensure you and your fish have the best chance for success.

Perhaps the most important consideration when picking a mandarinfish for your reef tank--is to seek out captive-bred mandarins first. Aquaculture breakthrough for this species made a big splash several years back, and now numbers of these fish are provided into the hobby, sustainably raised through aquaculture.

These fishes are literally born and raised under similar conditions to what would be found in your tank--and they are also raised to accept commercial foods, which should also make caring for them a bit easier.

Since we know that these species are finicky eaters, prone to starve to death in their home aquarium, it is important to look for signs of starvation when you pick the individual to travel home with. There are two signs to look for, in particular. The first is whether the fish is actually eating in the local fish store.

Ask about whether the fish has been eating normally. Stop by the store during feeding time or ask to see the fish eat.

Also, avoid any individuals (unless your plan is to rescue them) that look thin or malnourished. The classic sign of malnourishment is to look at the muscle on their dorsal side, just behind the skull. This should be one of the thickest parts of the body. If it is sunken in, that may be an indicator that fish has been starving.

Of course, the argument could be made that the starving fish needs your love and attention even more…just know that your money may become a charitable donation in that case, but your mission is commendable.

There are also a few different varieties of mandarin goby, commonly available in the hobby. A few of the most popular are blue, green, and red mandarin gobies.

The most popular and commonly found mandarin dragonet is the Synchiropus splendidus species, which can be found in two different color forms--commonly called the blue mandarin goby or the red mandarin goby. These two fishes look substantially similar, with the same wavy coloration pattern, but with either blue or reddish/orange predominant tones, depending on whether you’re looking at the blue or red varietal.

Synchiropus picturatus, also known as the green mandarin goby or the spotted dragonet, on the other hand, is an entirely different species of fish and has a distinct ring or spot patterns on a green background vs. the wavy designs found on their blue or red cousins. 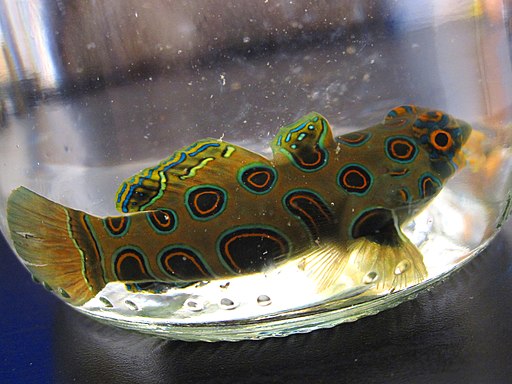 Due to some pretty amazing advancements in the breeding of saltwater fishes, captive-bred dragonets have become available on the market. If you are looking to add this fish to your reef tank, I encourage you to see if your local fish store can get the captive-raised fish in for you.

More Information about the Mandarin Fish

The mandarin goby is often one of the first saltwater fishes on a new aquarium owner’s wishlist. Still, since they require a mature reef tank with substantial natural foods to eat, they are not recommended for the beginner.

Check out these two articles to learn more about:

If you have a few minutes, please watch this video about the mandarin goby.