The engineer goby is one of my absolutely favorite saltwater fish. I’ve kept them in my display tank for years. They’re one of the most inexpensive fish in the saltwater aquarium hobby, too. Most of the time, they cost below $10 for a small juvenile fish. And if you aren’t already convinced you should have one in your reef tank, I’ll make sure you’re a convert by the time you finish this article!

I have my reasons for loving the engineer goby. Maybe you’ll agree, maybe you won’t. And you can drop down to the various links below to formulate your own opinion. Personally, I think you should stick through the entire article and savor the full experience. (Not that I’m biased or anything)

Natural Habitat of the Engineer Goby

The engineer goby (Pholidichthys leucotaenia) hangs out in colonies throughout the Indo-Pacific. Some groups create tunnels that number in the dozens. Others? They work together in colonies of HUNDREDS to form interesting pathways! The engineer goby is a social fish that lives to burrow and construct homes through sand and coral rubble. (Which, in case you couldn’t guess, is how they earned their name)

And while they happily thrive in the ocean, they share qualities with cichlids if you trace their lineage. That’s right – freshwater species such as angelfish (not you’re reef-dwelling species), Oscars, and discus. The cichlid relation is where they get that digging habit – and a bit of a territorial streak. Not to mention deciding to primarily order from the carnivorous side of the menu. However, they’re unique enough to have their own family: Pholidichthyidae.

Engineer gobies spend almost all of their time in the sand, digging. This means they are best kept in a tank with live sand substrate or a deep sand bed. They’ll also use small rubble or crushed aragonite for their burrows. But most of the digging happens in the sand.

When it comes to feeding time, they dart up and out of their burrow to grab some food, as you can see in this YouTube video:

Why do I like them so much? Well, plenty of reasons. But I’ve narrowed it down to two big categories:

If you hunt for engineer goby in a fish store, you may find them listed under a few different common names: convict goby or convict blenny. It gets confusing – not the least of which because there IS a convict blenny out there (Prioleps nocturna). And, of course, this awesome fish is a goby, not a blenny; they have different adaptations. (But we’ll explain this naming quandary in a second)

What makes the engineer goby’s appearance so cool, though, isn’t this label mismatch. It has to do with the way they “disguise” themselves for protection. Take a look at the juveniles in the photo below. Now, compare it with this school of coral catfish (Phetusus angularis) in THIS photo, and see if you can see some of the same patterns.

Coral catfish have mildly venomous spines as a means of defense. It’s thought the engineer goby mimics the look as a protective adaptation to allow more of their young to survive to adulthood. And since these gobies maintain strong social bonds, predators find it easy to get confused. They know the coral catfish will leave them feeling miserable and painful with a bite. And most won’t waste time getting close enough to check for barbels!

As adults, engineer gobies completely change their look. The single, horizontal stripe disappears and gets replaced by a black and yellow striped pattern. The pattern resembles jailhouse stripes in some individuals (where the convict blenny and convict goby names came into play).

They grow into the new coloration over the first year of their lives. The adults also stretch into long, slender, eel-like shapes.  Most of your non-fishy friends may look at your tank and think your engineer goby IS an eel. That’s your cue to step in and explain the exciting transformation your gobies underwent. And then you can describe the difference between gobies and eels – or gobies and blennies (your choice). 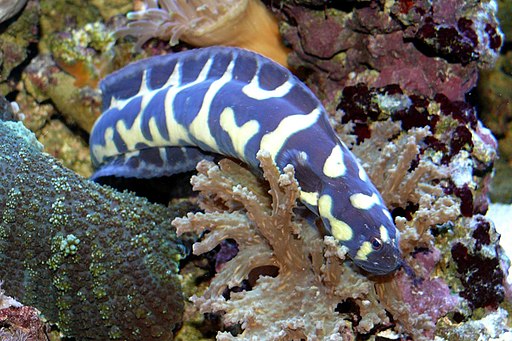 The engineer goby fascinates me because of the digging behavior. While social, they are a shy species and spend most of their time in the tunnels they dig in the sand bed. That particular behavior isn’t necessarily unique. You’ll find other species that duck into tunnels and prefer to call the sand home.

I love the engineer goby because they don’t just build ONE set of tunnels as a dream home and retire. Nope! They never seem to STOP digging. They constantly dig and re-dig through the tank’s sand. These clever fish can move up to SIX POUNDS (2.7kg) of sand in one day!

Of course, that means some extra responsibility on the end of the aquarist. All of that excavating can lead to cave-ins. A trapped engineer goby can end up starving. And then it’ll pass away – and you’ll never notice the absence until it’s too late. It’s important to look at the balance and structure of the live rock within your aquarium and reinforce everything to prevent collapses. Remember, these are eel-like fish with the ability to snake and squirm through sand, coral rubble, and gravel. It won’t take much for their tunnels to undermine any loose structures.

You can also encourage your engineer goby to visit the surface by picking out live rock with holes, crevices, and caves. They’ll poke their heads out and explore the possibilities – when they get tired of that digging habit. The engineer goby is carnivorous. And, as a meat-eater, it should get fed high-quality meaty foods:

As shy fish, they often get spooked by the fast motions of the other fish in the tank. So make sure you go slow, remain quiet, and stay patient when feeding these awesome fish.

At feeding time, they dart out of their burrows to grab the tasty morsels of food from the water column as it floats by. They’re not the most adept feeders, often missing their first attempt to snag a snack. As such, you don’t need to rush out and stock up on live foods. (Odds are your other tank residents will snatch up the offerings before an engineer goby ever gets a chance to try)

Engineer gobies also benefit from being fed twice a day – if you can manage it. However, as their primary activity is tunnel excavation, a single heavy feeding will suffice.

Is the Engineer Goby Reef-Safe?

Officially, the engineer goby is reef-safe. But you should take a few factors into consideration. As mentioned earlier, they constantly dig under the surface of your sand bed. When they do, they can cause the live rock or corals to sink. This can lead to structural collapse. As corals fall against one another, you may end up with “tentacle wars.” If you’re not paying attention and intervene, you could end up losing a particular coral.

If you plan to keep this amazing fish in your tank, make sure your reef structure starts on the bottom glass. In other words, place the foundation of the reef on the tank’s glass surface, NOT on the sand. If you stay on the substrate, the engineer gobies will dig under those rocks, the weight could collapse the tunnel, and they’ll topple your rock tower. (Then you could also end up with a trapped engineer goby)

There are also reports of an engineer goby eating fish or shrimp small enough to fit in their mouths. They ARE carnivores, after all. You’ll want to look over their tank mates and think carefully about whether they’re at risk of becoming a snack. 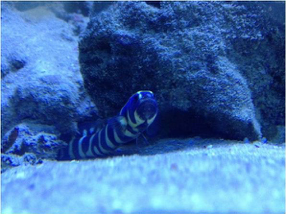 According to Matt Wittenrich, in The Complete Illustrated Breeder’s Guide to Marine Aquarium Fishes, the engineer goby is a relatively easy fish to breed in the home aquarium. Of course, trying to tell the two sexes apart gets tricky. They look identical. However, they’re a social species. And if you go with a group, the odds are probably in your favor. So since these fish are inexpensive and sold as juveniles, the most straightforward way to create a mating pair is to buy 5-7 youngsters and allow them to pair off on their own.

You’ll need to wait until your fish reach sexual maturity. This happens around the age of 3-4 years. It’s a wait, but if you’ve created a reef tank that allows your school of engineer goby to tunnel and socialize, you’re probably on the right track to end up with little striped larvae. (There are no specific triggers to induce spawning)

Spawns are relatively irregular, happening once or twice a year. Luckily they’re relatively large in size – averaging 400-500 larvae (again, according to Witt). Unhappily, spawning takes place inside those tunnels, so you won’t see it happen.

Once the larvae hatch from their eggs, they swim around the burrow entrance under the careful watch of their parents. Yes, like freshwater cichlids, both parents watch over, protect, and even defend the larvae. And as soon as there’s a potential threat, they’ll dash back into the tunnel for safety. Besides providing appropriate food (brine shrimp nauplii and copepods), you don’t need to worry about intervening. The engineer goby’s a fantastic parent.

Even though I’ve kept these fish in my tank for years, I’ve unfortunately never observed spawning. But I’m obsessed with the idea. I can’t wait to wake up one day and see 500 larvae swimming around my engineer gobies! Personal Observations on the Engineer Goby

I’ve been fortunate to keep several engineer gobies in my tank over the years. In addition to what I’ve shared above, I want to add two observations from the individuals in my tanks:

The engineer goby is prone to saltwater Ich. More than one individual developed problems with this parasite “out of the blue,” while others in the same colony didn’t. Don’t take this observation too far, though; it’s a personal anecdote. However, I encourage you to keep an eye on your gobies. I speculate that they spend ALL OF THEIR TIME in the sand bed, putting them close to the hatching phase of the parasite’s life cycle.

I don’t know if this is a universal truth about the engineer goby, but I’ve personally observed they’re susceptible to death during power outages. Unfortunately, my engineer goby was the canary in the coal mine and the first animal in my tank to die due to complications from losing power. The temperature fluctuations and changes in the water flow impacted the aquarium’s systems dramatically. While hardier species in the tank came through the outage, the engineer goby couldn’t cope.

You should ALWAYS have a backup plan for these situations. But it’s also a lesson in checking your systems if you plan to house this awesome fish.

Clearly, the engineer goby is the coolest fish to bring the term “cichlid” to saltwater. But if you feel you need some more convincing, here are some more blips on the awesome radar that should do the trick.

For instance, getting to see engineer goby spawning in action! Talk about inspiring! This YouTube video shows tiny gobies swarming around the entrance of a tunnel opening (with a coral banded shrimp to provide scale):

Want to learn about some of the best tank mates for the engineer goby?

Perhaps you like the idea of a burrowing fish, but you’re not keen on tunnel excavation throughout your tank. So why not check out some of these options:

If you have a community tank that is at least 40 gallons (141L) or a dedicated 20-gallon (76L) tank for a pair, a deep sand bed, and a few dollars in your pocket, you could add this awesome, shy, and perpetually busy fish to your display. The engineer goby is one of my favorites. I hope you will enjoy them, too. What do you think – is an engineer goby in your future?

Please leave a comment and let us know if you’re interested in this fish or if you already have one.