You can use the following links to jump right to the Pipefish care guide question on your mind or keep scrolling.

Pipefish available in the aquarium trade are mostly wild-caught (though some hobby breeders have seen some success, and there is hope that this might change in the future). Because of their shy nature, reluctance to eat prepared foods (at least at first), need for regular feedings, and incompatibility with many other reef aquarium species, Pipe fish are attractive, enticing but best left to expert aquarium owners.

The two most common types of pipefish in the aquarium trade are dragon-faced and flagtail. Both come in various species, and there are some differences in care and compatibility between the two types. 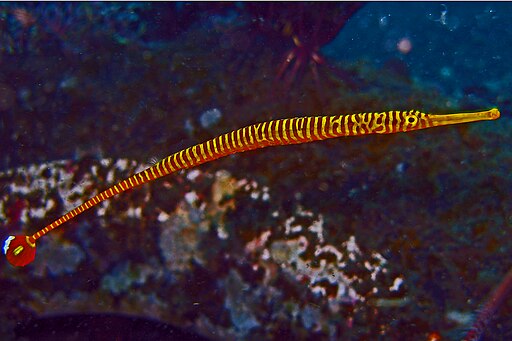 The most commonly available Pipefish come from the reefs in the Indo-Pacific or South Pacific Ocean regions. Similar or the same habitats as seahorses. These are generally protected habitats with slow-moving water, seagrasses or macroalgae, gorgonians, sponges, or other submerged structures.

Because of their poor swimming abilities (they only have a dorsal fin, and in most species, this is small and not very effective for locomotion), they tend to drift around on currents using seagrass for cover and camouflage to avoid predation.

Unlike most other fish you would consider keeping in your aquarium, they have rigid bodies and propel themselves through the water pretty much with just the help of their dorsal fins, as you can see in this video here:

The weird world of seahorses and pipefish

Pipefish can be challenging to care for. They are docile, shy creatures and are typically wild-caught. They often have a robust preference for live foods and may be challenged to transition from eating live food to a frozen diet. Many sources say they can be weaned onto frozen food, but there are also many failures, which is a good reason to use caution before buying one of these species.

Live foods are generally able to entice shy or reluctant feeders to dine. Live foods are often required to entice picky eaters to eat. They can later be weaned off live foods and onto frozen.

Because of their size, shape, and armored appearance, it is hard to know if your Pipe fish care has been sufficient. With most other saltwater fish species, you can tell right away if an individual is malnourished or otherwise not getting enough to eat, but that may be a lot more difficult to notice with pipefish.

An individual could be malnourished, and it would be difficult to notice until the problem is completely out of control. It is important to properly feed them and watch their eating habits closely to ensure they are getting enough nutrition.

What do pipefish eat?

Pipefish are notoriously finicky eaters, which is perhaps the biggest reason they are labeled as expert-only saltwater fish. They prefer to eat live foods: copepods (including red bugs), mysis shrimp, brine shrimp and are also likely to enjoy any planktonic larvae you’re lucky enough to have in your tank from your ornamental shrimp or clean up crew.

Raising your own copepods is a viable option. Also, keeping various reproducing clean-up crew species can help add “food” to your tank. Pipe fish will happily snack on shrimp, crab, snail, and polychaete larva floating around in the tank.

Popular frozen food options for those pipefish that can be trained to take frozen foods are mysis shrimp, cyclop-eeze, and brine shrimp.

Their picky eating habits and how easy it is to accidentally starve them are the main reasons they are considered “expert only” fish by many hobbyists. Their food requirements affect most of the aspects of their care. Placement in the tank

A well-established tank with lots of living rock and a healthy microfauna population is a minimum requirement for your pipefish. They don’t require a lot of space/volume, so a 20-gallon tank should suffice.

Because they are poor swimmers, they need a tank with gentle currents to get around on. Fantails are considered the best of the Pipe fish regarding swimming because of their large fantail, but they are still at the mercy of the current.

They are shy and require a lot of places to hide. Because they are good at camouflage, they will hang out upside down in the tank with lots of seagrasses mimicking their surroundings. Their need for hiding spaces can also cause some issues with pumps and overflows.

It’s best to cover every opening in the tank, but if one goes missing, checking the sump and overflow is always a good place to start.

As mentioned throughout this article, pipefish are amazing, gorgeous, delicate, and peaceful creatures that inhabit quieter, calmer parts of the ocean than some more vibrant, active, bold reef individuals.

As such, planning out the invertebrates and fish to keep with your Pipe fish is an important step towards having great and long-lasting success.

Great species to keep with pipefish

Having a Pipe fish or seahorse aquarium may be the one time you can get really excited about keeping macroalgae, like Halimeda, Caulerpa, or Ulva, and not worry about controlling it, calling it problem algae. Gorgonians are a great, natural sessile vertebrate that can add interest and attractive dimensions to your saltwater aquarium. They will also do well with any other non-stinging corals you wish to keep, although since you will probably be feeding larger quantities of brine shrimp, mysid shrimp, etc., you may want to keep it towards the easier-to-care-for LPS or Soft Coral types.

They should also do quite well with Nassarius snails, Cerith snails, and other members of the clean-up-crew, as long as those members are not the harassing type.

The best saltwater aquarium fish species to keep in a pipefish aquarium would be Seahorses, the Mandarin goby dragonet, or other small, non-cleaner gobies, like the Clown goby, Yellow watchman goby, etc.,

Species to avoid keeping with them

When it comes to successfully caring for pipefish in a reef tank, there is a long list of saltwater aquarium fish and invertebrates that are not compatible with keeping with them. See the specific sections below for more information.

These are slow-swimming, docile creatures that aren’t always in total control over where they are swimming. Therefore it is recommended to not care for them in the same tank with any other stinging invertebrates, including the Elegance coral or any Anemones. The stinging tentacles of Elegance corals can hurt Pipefish

There is a long list of saltwater fish that are not recommended to be kept with pipefish. You are essentially trying to prevent caring for them in the same aquarium as any fish species that are:

Here is a brief, non-exclusive list of the type of fish considered to be so fast-eating that they would be considered incompatible with keeping pipefish: Of course, you always want to avoid keeping them (or any other fish) with a natural predator that would turn them into an expensive treat. The following predators are considered incompatible with pipefish: Triggerfish like this one may try to eat your Pipe fish

This last group is much less troublesome than the first two, although also considered incompatible with pipefish. The reason is that these over-active cleaner-type fish will potentially chase, pester, and peck the poor Pipe fish until they are so stressed they succumb to infection. Some Pipe fish species can be easily sexed while others are harder and, in some cases, nearly impossible to tell the difference.

Because they tend to hide and the fact that many of their defining sex traits are on their bellies, transferring them into small specimen tanks to have a look at their bellies (and/or attempting to photograph them in their larger tank) is often necessary. Compatibility issues can make knowing the sex of your fantail particularly necessary, and checking before you leave the fish store is definitely suggested.

As far as breeding pipefish goes, it is important to remember that, similar to their seahorse cousins, the male fish is the one that keeps the eggs. The female will lay her eggs into the pouch on his underbelly, and he will hold on to them until they hatch.

At least one online breeder (Jim Welsh) has had success breeding them in captivity. His system involved catching the fry as soon as they hatched and raising them on live copepods and other plankton until they were fully grown before forcing them to switch to frozen food. The BBC did a 3-minute clip about the breeding habits of the banded pipefish. It covers the courtship and spawning displays, morning bonding rituals, and hatching of the amazing larvae.

White boil disease is an often fatal fungal infection caused by Glugea heraldi, infecting the skin and organs. The namesake white or grey boils may show on the skin, and the fish would become lethargic, ultimately succumbing to the disease.

Brooklynella is caused by a ciliated protozoan parasite that infects the skin and gills. Infected pipefish should be treated with formalin and malachite green in a dedicated hospital tank.

Hopefully, you’ll agree that Pipefish are exquisite, gentle, amazing creatures. I just re-watched the BBC piece again and am blown away by the courtship and bonding shown between a monogamous pair. However, please consider that these fish are best left for the experts due to their gentle disposition and finicky eating. While I don’t have any inside information here, based on all the progress we have seen, in recent years, concerning making breeding breakthroughs, I wouldn’t be surprised if readily available aquacultured individuals are not far away.

They exist today but are not all that commonly available.

So, for now, let’s leave them in the ocean and for the experts. What are your thoughts?

What are your thoughts about keeping the pipefish? Have you had any personal experiences?

This research was enough to keep this one off my shopping list. How about you?