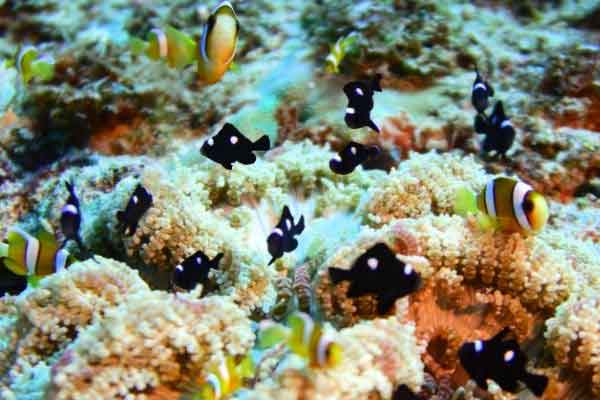 Here’s a riddle for you: what’s black and white and in tanks all over? The Domino Damselfish, of course! Let’s take a closer look at this clownfish cousin to help you decide if it would be a good saltwater fish to add to your aquarium.

Quick facts about the Domino Damselfish:

Natural habitat of the domino damselfish

The Domino Damselfish is often found in the Indian and Pacific Oceans. Most commonly, you will see them around Eastern Africa and in the Red Sea but it can also be found in the seas surrounding Japan and Australia. The Domino can often be found swimming around the heads of coral, inside of a sea anemone, or hiding amongst sea urchins, as far down as 180 feet or closer to the surface at a depth of 3 feet. 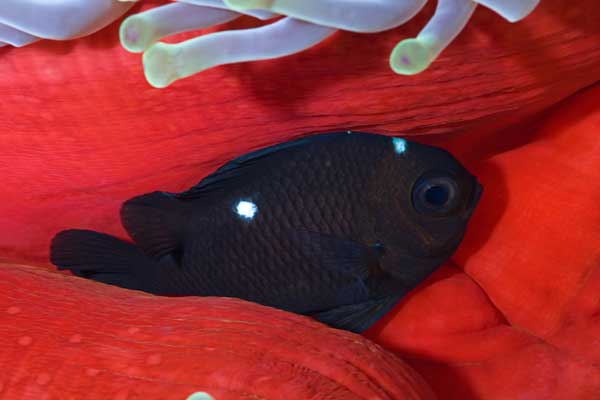 Like their cousins the clownfishes, Domino damselfish also forms commensal relationships with anemones, in the wild, for protection.

The three spot damsel is a hardy fish, tolerant of typical aquarium water parameters and while it is never advised to deliberately allow your water conditions to deteriorate, they are a species that will tolerate more instability than more fragile species. As adults, they grow to a moderate size--between 5 and 6 inches. They are not a particularly large fish, and are not open water swimmers, like tangs or angelfishes, and are therefore suitable for moderately large reef tanks (somewhere around 55-gallons or larger is generally advised). The ideal tank would have sufficient live rock to allow them areas in the aquascape to hide.

Otherwise, the Domino damselfish isn’t picky about water flow or whether there is sand or crushed coral gravel in the tank. They do not need a host anemone to be safe and secure in your home reef tank, but they may pair up with one if you do.

Because most anemones are wild-caught, do not generally do well in captivity and can cause a lot of destruction while moving around your tank, I do not generally recommend them. A few leather corals and LPS corals can become surrogate anemones for damsels and clownfishes and are much easier to care for.

They don’t require any specialized equipment to care for them, although since they are moderately large fish with big appetites, a protein skimmer may help you keep the organic pollutant levels low in your tank.

The Domino damselfish is a substrate spawner that will lay their eggs on a rock, or in your aquarium, perhaps on your glass or another tank decoration. A single male and female will pair up, and the male will guard and care for the eggs, once laid.

Here is a video of a pair laying eggs on a rock:

If you want to try to breed saltwater fish at home, this could be an interesting species to try. But the offspring are small and much harder to raise than clownfish species.

Take a look at this next video where you can see just how small a newly hatched domino damselfish larvae (prolarvae) really is:

Feeding larvae that are this small requires advanced rearing techniques, due to the small-sized food requirements and extended period of time before metamorphosis into juveniles.

Like most other damselfish species, incompatibility with many other species is one of the big drawbacks of Dascyllus trimaculatus, too. Why? Because damselfishes are generally territorial and aggressive and therefore often don’t mix well with others.

Aggression increases over time, so if you want to add domino damselfish to your tank, your best bets would be to:

As your damsels get older and become more comfortable in your tank, they will start to claim as much of the prime real estate as they can--limited only by what the other inhabitants will put up with.

They will chase and nip at any invaders--fish, invertebrates and even your hands, potentially. That is bad news for your more peaceful inhabitants, who may become some stressed out they succumb to disease or starve.

Pomacentridae fishes are also generally quite aggressive with other pomacentridae--meaning damsels will fight with other damsels and usually other clownfishes. Their aggression is not limited to those other, similar species, but rather you should expect even greater aggression there. You will find reports from people who have managed to mix multiple species of damsels. It is possible, with some careful planning and some good luck, but I don’t recommend you bank on it working.

The Truth About DAMSELFISH - Livestock Series

Domino Damselfish are not picky eaters and will likely eat whatever you provide for them, in the aquarium. In the wild, they are omnivores, which suggests they will do best in your tank if you provide them with a varied diet that includes both meaty and plant-based foods.

While there are certainly a lot of other foods you could provide your damsels, traditional foods like frozen or live mysis shrimp, brine shrimp, live blackworms, and spirulina flakes could provide a reasonable diet foundation.

In a mature reef tank, your three-spot damsels will forage for additional nutrition.

Keep in mind that Dascyllus trimaculatus is also aggressive with respect to their eating habits. They will be among the first to swim up to where you are adding the food in the tank and will eat with gusto, each and every day, that makes it seem like you’re starving them, even when you know you’re not. That means you will have to have a special plan for making sure that the other, less aggressive feeders in your tank have a chance to get the food they need.

Consistent with the needs of most other saltwater fish, it is better if you can feed them a few, smaller meals each day, rather than one big meal. So if you can accommodate it into your schedule, feeding your fishes 3 times a day is better than twice a day, which in turn is better than once a day.

If you can only accommodate once per day--I promise you that I’m not judging. That’s how I’ve fed my own fish for probably 40-50% of the time. But I figured it would be better to give you the best-case scenario and let you decide how often you can accommodate it in your own schedule. The domino damselfish is the third most commonly imported saltwater fish in the United States. Suffice it to say, therefore, that finding them shouldn’t be a problem. They are common enough that you could find them at big box pet stores and private local fish stores and online. They are hardy enough that they tolerate shipping well if you plan to add them to your online saltwater fish order. However, since they only cost $5-10, it won’t be economical to order them online, unless you’re adding them to a coral shipment--and who can blame you for adding a few corals…just to make it worth the shipping costs…or to score the free shipping :).

Whether to buy a Domino Damselfish or not

Juvenile domino damselfish are certainly cute and attractive fish. They don’t have the bright colors of some of the other reef fishes, but they are certainly a brilliant dark color and sort of just “look like a pet”. The price tag is inviting. Their tolerability profile (they are quite hardy, indeed) and longevity (they can live for 20 years) are all compelling reasons to add them to your tank.

But buyer beware, these fishes will be aggressive. They will chase…even harass your other reef fish, so keep that in mind before you buy. If you’re just starting out in the hobby and want to see if you have what it takes to keep saltwater fish--they could be a good fish for you to start out with. Just realize that if you add them to your tank now, it will limit what you can add to your tank later. For a smaller-sized beginner tank, that’s perfect. For a really large tank where the territories and aggression can be dispersed, that should also work. For that medium-sized tank where you have aspirations of mixing lots of docile community fish, you should probably keep searching.

According to a recent survey (from a few years ago), the Domino damselfish is the #3 most commonly imported saltwater fish. If you’re looking for other popular fish, check out the whole list of:

Or perhaps you’d prefer to learn about a damselfish cousin that is less aggressive and does better in a community tank:

Check out the green Chromis.

Learn about the most popular reef salt mixes here.

Explore a totally different fish species, like the yellow tang.

Or engage more deeply here by watching this video about damselfish.