The Flame Angelfish, Centropyge loricula, is one of the most popular dwarf angelfish species. All you have to do is see one single specimen to realize why they are so popular. These fish get their name from their striking fiery red bodies with an orange center, just like a fire core. They display vertical black bars on the sides and deep blue back fin ends.

Jump ahead to the section that interests you most, or scan the entire page to learn some of the most interesting facts about keeping these brilliant saltwater aquarium fish: This flame angel is going through quarantine at my house

Is the flame angelfish reef safe?

The flame angelfish is considered to be semi-reef safe or reef safe with caution, because they will not hurt your shrimp, crabs or other mobile invertebrates, however they may nip, nibble or eat soft fleshy polyps or clam mantles, or they may ignore them completely. Many reef tank owners are willing to deal with the chance of a slight hassle in order to keep this gorgeous fish in their aquarium. However, occasionally, an individual likes eating corals so much that it becomes a problem.

Flame angelfish can reach up to 6 inches long, with males being slightly larger than females.

Flame angelfish are considered to be semi-aggressive, by most. That means they will be aggressive towards other angelfish and they may display some territoriality towards fish that are added to an aquarium after they establish their own territory. However, the level of aggression is generally acceptable in large tanks and if care is taken, when introducing new fish to disrupt the territoriality. How much does a flame angelfish cost?

The cost of a flame angelfish will vary some based on the store you purchase them from, where the fish was originally imported from, and the size of the fish. They are generally in the range of $70-$150.

Yes, they are relatively hardy and acclimate well to aquarium conditions, generally accepting a range of foods. The one exception to their hardiness is their susceptibility to marine ich parasites.

How long do flame angelfish live?

Their average lifespan is between 5 – 7 years. All Flame Angels are born female but have the ability (called hermaphroditism) to become male.

In the wild, these fish can be found in stony coral reefs scattered throughout most tropical areas in the West Pacific, from the Great Barrier Reef and the Pitcairn Islands, around the Marquesas, and Hawaiian islands and all the way to Belau.

Centropyge loricula are perpetual motion machines, swimming almost non-stop and picking at the rocks for tiny morsels of food as they go. 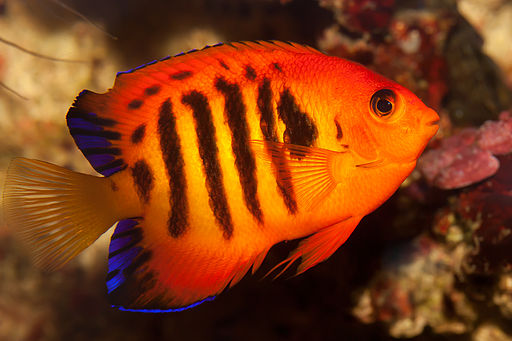 What is the minimum tank size to keep a flame angel?

There is no consensus, online, with respect to what the minimum tank size should be to keep this fish. Some sites report 45 gallons, some report 70 gallons. I will share with you my perspective, on the matter. This fish swims around the tank…a lot. It seems to never stop swimming. It swims and nibbles on rocks and the aquarium glass pretty much, all day long.

But keep in mind, the fish is also rather small, in most instances. I’ve personally had some success raising this fish in a 70-gallon tank, so my recommendation is somewhere in between–a 55-gallon tank feels like the right size, from my perspective. The 48-inch length should give this fish a nice territory to zip around in.

What does a flame angelfish eat?

Flame Angelfish are omnivores and benefit from a diet that includes both meaty and vegetative foods. Some frozen foods even have foods optimized for dwarf angelfish.

Some foods to consider are brine shrimp, mysis shrimp, spirulina, marine flakes or pellets, and even sheets of nori.

Live rock will be grazed on in between meals.

Check out this video to see one eating nori seaweed:

A newly introduced flame angel may be shy at first, but if provided with enough structure, it will adapt quickly to their new environment and become an active, bold swimmer.

They are considered to be a reef-safe species, however, the caveat that accompanies any angelfish is that depending on the individual you receive from the local fish store, there is always the chance or risk that he or she may nip some soft fleshy polyps.

I can share that my own personal experience with a couple of individuals over the years is that they were reef-safe in my tanks. Centropyge loricula generally get along well with other similarly-sized non-angelfish species, but should not be kept in a tank with other angelfish except by advanced aquarium owners with large tanks and a desire to observe their pairing behavior or attempt breeding these fish. This is not an easy endeavor, and you should expect extreme aggression.

While the Flame Angel is a dwarf angel and therefore relatively small in size, they are active swimmers and would benefit from being kept in a tank sized 55 gallons or larger.

If you are looking for other community saltwater fish to keep with the flame angelfish, check out these articles for some inspiration:

Starter fish -Highlighted in that last article is the coral beauty angelfish, which would be an alternative to the flame angel–not compatible with it.

Check out this compatibility chart

Many of those who have attempted breeding Centropyge loricula in captivity stated that it pretty difficult and the young are hard to rear, but with recent advancements in the breeding of saltwater fish, I suspect that aquaculture flame angelfish will be available within a few years.

There have been successful attempts but nothing stable.

Flame angelfish spawn in the same manner as other dwarf angelfish species, by releasing sperm and eggs at the same time at sunset. The larvae drift among the plankton until they settle out.

The Flame Angel may also bee found in fish stores under one of these other common names: Dwarf Flame Angel or Japanese pygmy angelfish.

The flame angel fish is susceptible to skin parasites like saltwater ich. These are beautiful, delicate, expensive creatures. I strongly recommend quarantine for new individuals to make sure they are acclimating well to life in your home and are free from parasites before adding them to your display tank. Quick facts and pros and cons

Your reef tank may gain some color with these lovely fish, but let’s keep in mind the essentials of having them:

My personal experience caring for this fish

I have been fortunate to have cared for this species in my tank on three occasions. While I gave a disclaimer earlier that these fishes might develop a taste for soft coral polyps, I never noticed any issues with mine.

At least one of the fish I had seemed extremely susceptible to marine ich, and died due to complications from an infestation–which is totally my fault, not his/her.

Otherwise, Centropyge loricula was a delightful species to have in my tank. Extremely bright, bold coloration and active swimming made it a tank favorite among almost anyone who saw it.

If you take just one look at the flame angel it will become obvious why these are such a popular (and expensive) saltwater fish species. What has your experience been with them?

Want to learn about another great angelfish species? Check out these articles about the:

Check out this article about the most popular saltwater fish

Learn more about this fish

Watch this video to learn more about this fish: