Acanthastrea corals, commonly known as acan coral or acan lords, are large polyp stony (LPS) corals and one of the most beautifully colored coral species. They come in purple, red, green, blue, orange, brown, rust, pale tan, and pale grey. The family includes many species with different names. And many tout them as one of the easiest LPS corals to grow. Put the two together, and you have the perfect LPS coral – with a few little quirks to manage.

With so many corals and patterns available, you’re probably eager to drop down into the various links detailing acan coral care. And that’s up to you – especially if you have experience with LPS corals already. But if you’re new to handling these invertebrates, you might want to read through the entire article and make sure you have a solid handle of things – just to stay on the safe side. Acan corals are found in the south Pacific, particularly around the Philippines and Hong Kong, in waters down to 30m. Ironically, that seems to be the same depth many waterproof watches are good to. So if you are underwater and still know what time it is, you might see an acan coral. In the ocean, acan coral feed mostly at night. However, they acclimate to diurnal schedules in the aquarium and will happily eat when you feed them. Look at the large polyps on this Acan coral frag

Oh, and why the name change for the Lordhowensis species? A 2016 study comparing DNA sequences. Scientists already knew several specimens looked the same, but they wanted to perform a more in-depth comparison. And when they looked at the DNA, they got their confirmation. Lordhowensis were more closely related to the Micromussa group than the Acanthastrea. So they swapped it over. But since it’s a relatively recent finding, you can find it listed under both scientific names.

Acan coral is generally hardy and easy to care for, making it a suitable species for intermediate aquarists. (Beginners may want to hold off on rushing to pick up a frag – and we’ll get to the why in a minute) The amazing color varieties make this LPS a show stopper – even for advanced hobbyists with mature tanks. And since you have flexibility with your tank size (they’ll accept a 5-gallon/19L tank provided you meet their lighting and flow needs), you can set up displays to suit any whim.

But let’s get into the nitty-gritty of that care, shall we? 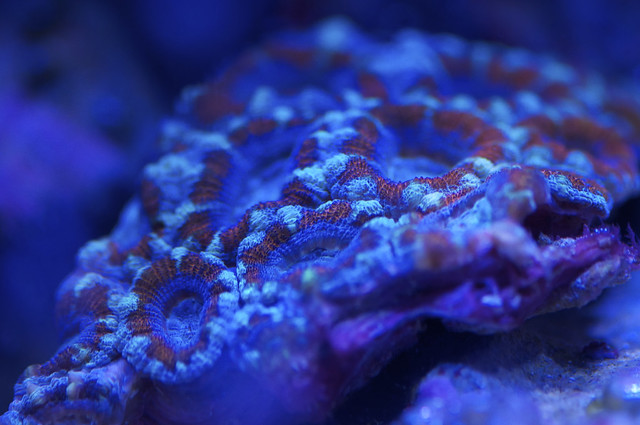 The best placement for an Acan coral is in a location with moderate water flow & light intensity, six inches or farther away from neighboring corals. Too much water flow or light will damage the coral. Acans will damage other corals closer than 6-inches.

One of the most popular questions related to ANY coral care: Where do I place my frags?

The first thing you need to do is make sure you allow for room to grow. Many of us (*raising my hand with a look of guilt*) pack our coral frags in too closely. We optimize the look of our tanks for the present, forgetting to take future growth in mind. Corals are animals, and (when they’re healthy) they colonize available spaces. Not to mention you need to remember that the majority of corals ARE aggressive creatures, bent on defending what (little?) space they have. And since acan coral has some nasty sweeper tentacles, you need to give it plenty of space to prevent turf wars.

You also need to situate this coral in a place with moderate water flow and lighting. (Not too much, not too little – just right) Remember, it IS a large polyp stony coral, and you don’t want the water flow to get so high (like with small polyp stony (SPS) corals) that you end up ripping their delicate flesh.

The same with their lighting needs. If you think about their natural environment, it’s fairly deep – AWAY from the intense sunlight of the surface. If you go for a dramatic lighting scheme to “spotlight” their colors, you’ll cause stress. Actinic lighting will work nicely – and help those vibrant shades pop. A PAR between 25-50 will split the difference between their photosynthesis needs and your desire for a stunning reef tank.

Acan coral is considered photosynthetic, meaning they derive at least part of their calories from the commensal zooxanthellae that live in their tissue. They also pull some nutrients from the water column. This will help keep nutrient levels in check if you have fish in your tank. However, the amount of nourishment these two processes produce? It isn’t enough to sustain your acans. They’re carnivores. And that means they want MEAT. So you should feed your acans.

When ready to feed, the acan coral will extend its polyps to capture prey: copepods, Artemia, chopped seafood, or even commercial foods (frozen, flake, or pellet). As long as the tentacles can catch something delicious and pull it in, they’ll happily slurp it down. As fast feeders, you’ll find them a fun addition to your tank, too! Once or twice a week, plan to target feed your acans to keep them healthy.

You target feed these aquarium corals by using Julian’s thing to squirt a tiny, gentle blast of food over the polyps.

Doubting the importance of feeding these corals? Give it a try. You’ll see your acan coral grow faster with target feeding than broadcast feeding alone. Not to mention the focused feeding will prevent less waste from building up in your tank. (Besides, it’s fun to watch those tentacles extend out to snatch up your offering!)

Acan coral is generally compatible with most other species. The key ingredient to whether they’ll tolerate other coral neighbors is space. If you pack it too close to other corals or allow a green star polyp colony to grow beside them, you’re in for coral warfare. Given enough space to thrive and grow, the acan coral will make an attractive addition to your saltwater aquarium. And the magic number’s 4 inches (10.2cm) – in theory.

Given enough space, you can keep them near Plate corals, Favia, Chalices, and other popular corals hanging out in the lower zone of your tank.

But if you plan to keep acans with soft leather corals, you need to take additional measures to neutralize the chemical warfare leathers wage in a tank. Activated carbon and water changes will do the trick, protecting your acan coral from the chemicals the soft corals produce to inhibit coral growth.

And then there are the non-coral tank inhabitants you need to consider. You don’t want to keep acans with fish that like to peck at fleshy polyps – and damselfish are some of the biggest offenders. (Unless you meant the acan to be fish food – which is expensive and not recommended) These reef-safe fish will leave your acan coral alone: Recognizing Signs of Trouble With Acans

Has it been days since you saw your acans tentacles extended? An acan coral dying or not happy in the tank because of too much water flow or too much light will not extend its polyps. If your water parameters are good (and stable) and your acan coral still won’t extend its polyps (even at night or even when you attempt target feeding), then it could be the lights or water flow. Carefully move it to an area of lower flow or less intense light (or both, depending on the circumstances).

Fragging this LPS species is possible and relatively straightforward – as long as you have the right power tools to execute a fast, safe cut. It isn’t a coral I’d recommend for a first fragging experiment, but if you have the right gear (and an iron constitution), it can be done. Acans recover nicely from the process – particularly when you’ve been target feeding them to encourage healthy growth.

So what tools do you need?

It sounds frightening (and complicated), but it isn’t terribly difficult – provided you make sure those polyps are safely retracted. If you want a handy demonstration, you can watch this YouTube video to learn more about fragging acan corals:

If you’re interested in diving deeper into learning how to frag corals (it’s easier than you think), download my definitive guide.

Acans are popular and available at most above-average local fish stores. It’s also easy to purchase them from online stores, like LiveAquaria and others.

Due to their popularity and the mind-numbing array of color choices, you’ll find different types or varieties available under different names. For instance, you’ll see names pop up like Australian Lord (or Aussie Lord), rainbow, green, Superman, etc. If you’re looking for a specific type or coloration to fit your tank, I recommend you turn to online stores so you can find the precise color and pattern you’re looking for.

As you can see from the information on this page, caring for acan coral takes moderate skill. You need to provide the right aquarium conditions (water parameters), lighting, and flow. You also need to pay attention to the range of those sweeper tentacles, so you don’t end up with a coral battle within your reef tank. And since they can be a relatively expensive species to purchase, it’s recommended that you wait to pick out your first specimen until after you’ve mastered a few of the other more common and hardy LPS species.

Want to learn even more about acans? No problem – this YouTube video will pitch in:

If you enjoyed reading about the acan coral, you should read about these other popular LPS coral species: