Scoly Coral are popular Large Polyp Stony Corals that are hardy and might be a great choice for some of those moderate-and-lower light parts of the tank–if your budget allows.  The nickname or common name is a shortened version of Scolymia, which is the genus that they belong to, taxonomically. Scoly Coral typically have vibrant color patterns that make them stand out against aquarium backdrops. There are several different species of Scolymia that come from all over the world. Many beginners can easily pick out a specimen and keep it thriving in their tanks for years. 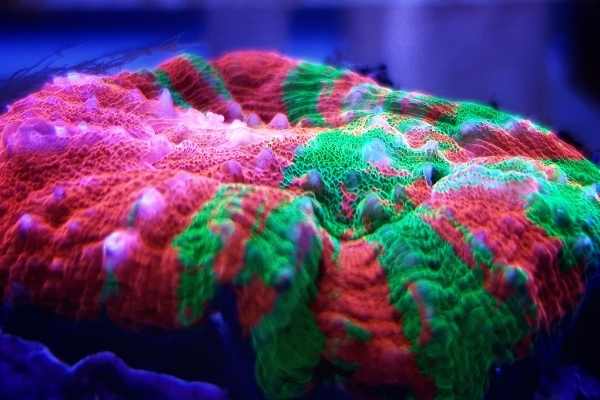 Quick Facts About the Scoly Coral

Fun fact: unlike some LPS coral colonies where the frag that grows up in your tank is made up of multiple polyps, each representing separate and distinct animals, the entire Scoly coral colony you see is most likely a single polyp, with a single mouth. 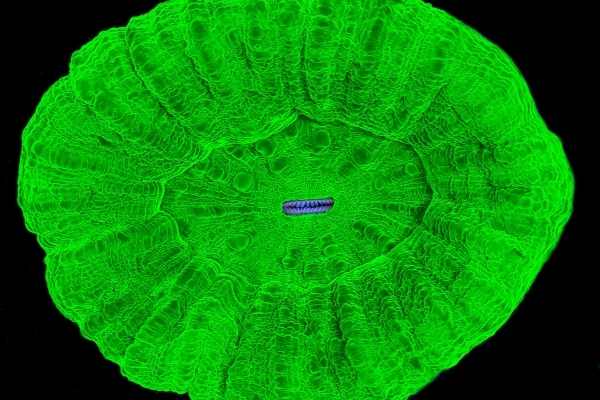 Scolymia corals are naturally found on reef slopes, in relatively protected waters, sometimes under structures, like overhangs that would create some shade from the intense sun (Borneman 2001). Due to the fact that each individual specimen that would be harvested is the entire coral colony, some species of Scoly Coral have made their way onto the protected species list thanks to disease and overharvesting.

In the wild, they are also often found among Tridacna clam species, too.

Scoly corals are generally hardy and should acclimate well to any mature tank with typical reef tank water parameters: 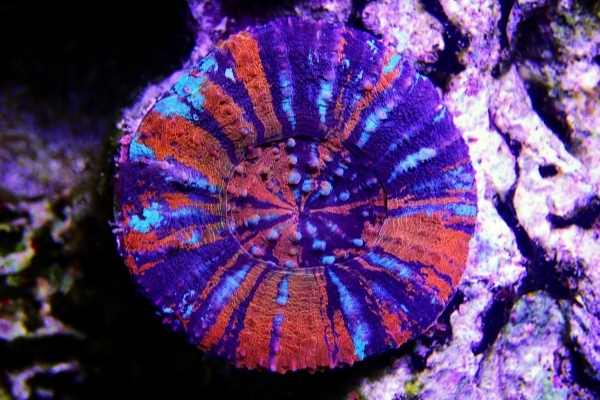 The easiest way to create reef quality water parameters at home is to make-your-own saltwater with a reef salt mix. Learn more about the best salt mix options here.

Due to their relatively compact design and donut growth form…

they are suitable for just about any size tank including nano aquariums.

With any new coral species, you add to your tank, I recommend you think about lighting in two steps, as follows:

If we look at that first step–acclimation–the goal is to add them to your tank and ensure you don’t shock your coral with lighting that is too strong. It is generally best to dim your lights when first introduced, or place them in a marginal zone where lighting will not be too intense–especially if they were shipped overnight. You can be a bit more aggressive if you know the lighting they just came from and if transportation was quick. In step 2, your goal is to transition the lighting to the way you intend to keep them in, for the long-haul. This generally means either moving them over a period of a few days or gradually increasing light intensity over a few days.

These corals require/prefer a moderate level of lighting intensity. Not too hot, not too cool. Probably somewhere over 100 PAR.

The Scoly coral has relatively large, fleshy polyps and will do best if you feed them 2-3 times each week. They are capable of eating rather large, meaty foods, as you can see in this video.

Target feeding is the best method. If you’re feeding a small particle food, that generally involves mixing a concentrated amount of food, like Reef Roids, in a small volume of tank water so that it reaches an almost pasty consistency. You then suck up the paste with a Sea squirt or Julian’s Thing and then squirt a small amount on the center of the coral, preferably when the feeding polyps are extended.

You could also feed a small amount of thawed meaty foods like brine shrimp, mysis shrimp, or even gulf shrimp or seafood because they have fairly large mouths and are able to ingest larger foods than some corals.

Check out this side-by-side comparison of the Sea Squirt vs. Julian’s Thing to see the pros and cons and which one I recommend.

Scolymia corals are considered to be semi-aggressive. They can damage neighbors that they can touch. It’s best to give them a wide berth, because their relative size will increase and decrease periodically, based on how inflated the fleshy tissue is.

Beyond the general advice to give them sufficient space so that they don’t attack or get attacked by a neighboring coral, a Scoly coral is generally compatible with other LPS, SPS, Soft corals, Zoanthids and, Mushroom species. They should also be fine to keep with reef safe fish species, as long as they don’t have a tendency to nip at fleshy polyped corals.

One of the most natural companions might be a Tridacna clam if you want to recreate a pairing sometimes found on reefs.

Scoly corals are an example of a popular aquarium species that are not easily propagated through fragmentation, or fragging, for a few reasons:

Hoping to see some advances in husbandry and perhaps the sexual reproduction of these amazing corals so we can stop wild harvest and continue to enjoy them.

Check out this video for more information:

Want to check out some other great Large Polyp Stony (LPS) corals to your tank along with your prized Scolymia? Check out these great options:

Or check out these great community saltwater aquarium fish species or find the perfect cleaner shrimp.

If you are looking for a gorgeous, vibrantly colored, hardy coral species that doesn’t require a lot of extra-special care, you should definitely check out the Scoly coral. If you’ve had one in your tank, please leave a comment below and let us know what your experience was.