The Bluestreak cleaner wrasse is a tropical fish with beautiful, distinct markings and the adaptation that it makes a living on the reef or in a saltwater aquarium by eating the dead scales and parasites off the outside of the other fish in your tank. Some of my favorite underwater images are of a fearless Labroides dimidiatus searching for parasites inside the mouth of a much larger predator fish.

These fish are commonly available and are generally inexpensive in saltwater aquarium stores—but buyer beware, these beautiful saltwater fish have a notoriously difficult time adapting to aquarium conditions.

Check them out, in action: 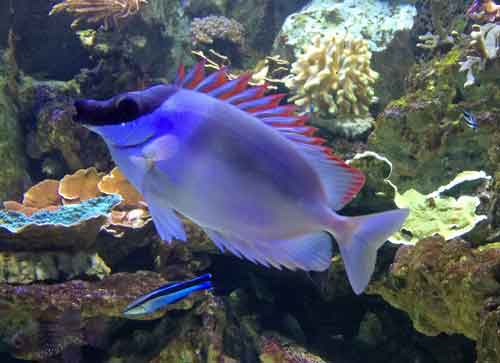 The Bluestreak cleaner wrasse inhabits all areas of coral reefs, including outer reefs and lagoons where it can quickly seek refuge from predators, from depths of 3 to 98 feet--can you imagine having a 98-foot deep aquarium? I’m imagining it now… that would be 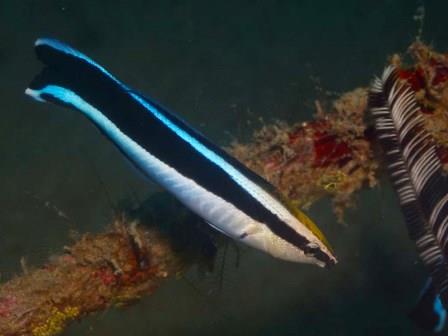 The reefs where the Bluestreak lives are found in Eastern Africa, The Red Sea, and even Japan and are plentiful in the wild (not endangered), which likely speaks to their relatively low retail price. They love warm waters with other docile saltwater fish that they can pick a meal off of. These are not shoaling fish, but rather form pairs or small groups (one male with a few females). These groups will set-up cleaning stations where they feed.

The Bluestreak cleaner wrasse doesn’t require any specifically challenging aquarium conditions, per se. Traditional reef aquarium water parameters are adequate and appropriate. These saltwater fishes are also relatively hardy, tolerant of water conditions, and like many other wrasse species, are bold, active swimmers that perform acrobatics in the water column, which is what endears them to the casual local fish store shopper. But the biggest challenge in successfully caring for them in your reef tank is to meet their nutritional requirements.

What does a cleaner wrasse do?

A Bluestreak cleaner wrasse picks and eats parasites off of the scales and gills of other saltwater fish, earning the name, “cleaner fish”. In at least one study of a wild population in the Great Barrier Reef, they were found to consume an average of ~1200 parasites from ~2300 fish in a little over 4 hours of cleaning (Grutter 1996).

Want to see them in action? Check out this Bluestreak cleaner wrasse taking care of a yellow tang.

A Cleaner Wrasse Cleaning a Yellow Tang with Ick

Labroides dimidiatus is a cleaner fish that generally struggles to acclimate to more traditional reef aquarium food. Because of that, most of these poor little guys (and gals) end up starving to death in our tanks. Properly caring for them, therefore, generally means having a tank large enough and stocked heavily enough (meaning lots of fish with loose scales, parasites, etc.,) for them to feed on and clean.

While the Bluestreak cleaner wrasse does require a moderate amount of room (aquarium size/volume) to be happy, because they are active swimmers themselves, the reason the recommended aquarium size is 110 gallons (or bigger) is that those tanks are generally stocked more heavily, with larger fish, which gives this beauty more of a fighting chance to survive. A tight-fitting lid is required

You will need to make sure to have a secure lid on your tank as this breed of fish is known to jump out of the water with ease. These fish tend to enjoy all levels of the aquarium and never stay in one particular area for a long period of time. They are perpetual motion machines, much like the six-line wrasse, and other popular wrasse species.

There are no specific lighting or substrate requirements to keep this fish happy and healthy. As mentioned before, the most important care element is having enough food to eat.

There are two primary methods of acclimation for just about any saltwater aquarium fish or invertebrate.

This method involves floating the bag in the aquarium for about 10-15 minutes to allow for the water in the bag to become the same temperature as the water inside the tank. Then, about every 10 minutes, you open the bag, pour out some water (10-30%) and replace the water with tank water.

It is generally recommended to dump out the water you remove from the bag, in case the source water is worse than yours.

Start off with smaller volumes of water (closer to the ~10% side) and then increase the volume exchanged with each subsequent pour.

Then, over a period of about 1-1.5 hours, the water in the bag has been replaced almost completely with aquarium water. Then, simply, let your fish swim out.

this fish is gorgeous and interesting to watch, no wonder they are so popular

Then I drip directly into the bag or plastic container.

Once the container or bag is mostly full, I dump out half (into the bucket) and keep dripping until an hour or so has passed (and the volume of water has doubled or tripled.

The Bluestreak is a non-aggressive species of fish that is reef safe. I recognize that the statement reef safe may be offensive to those of you who are opposed to parasite cruelty (that can’t possibly be a real thing, can it?), but what I really mean by that is that it won’t eat your corals. This is a bit of a cynical thought here, but it would probably be better for the species if they did eat corals, rather than starve. But rest assured, your corals should be safe with this fish around. 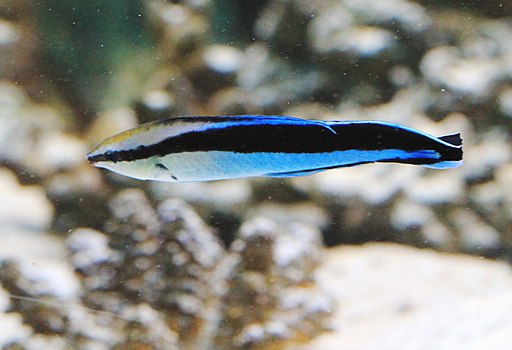 Can you keep 2 cleaner wrasse together?

Male Bluestreak cleaner wrasses will generally show aggression towards each other--so they should generally be kept with only 1 male to a tank. That male can be paired with a single or multiple female fish. The species is a sequential hermaphrodite, which means that every fish possess the reproductive organs to be both male and female. If a male dies in a group, the largest or most dominant female will most likely become the male in the group. There may also be aggression expressed with other wrasse species, like the Melanurus wrasse.

Yes, the Bluestreak cleaner wrasse is reef safe, leaving your corals and other invertebrates alone, although there are some reports of picking at clam mantles. They can also generally be kept even with most other saltwater aquarium fish, including some of the larger, aggressive fish, like the Picasso triggerfish or Dogfaced puffer fish. 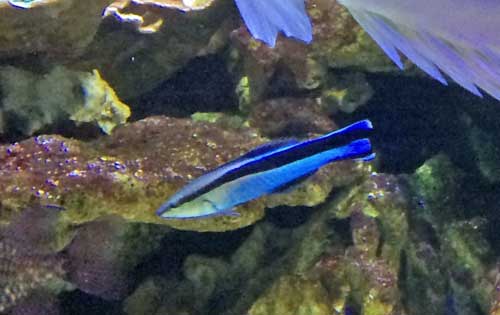 Breeding Bluestreak Cleaners is a tricky process for several reasons, but it has been done. It is nearly impossible to tell a female and male apart based on visual distinctions, but due to the fact that they are hermaphroditic, establishing a pair or harem shouldn’t be all that difficult, if starting with smaller specimens.

But if you recall the stated difficulties in keeping one cleaner wrasse alive, imagine now the complexities of keeping 2-4 alive (and well-fed).

When spawning, the male Bluestreak cleaner wrasse will perform a mating dance to attract and stimulate the sexually mature females. The female will then lay eggs for the male to fertilize. It’s common for one male Bluestreak to breed with multiple females at a time. This fish most regularly mates around the afternoon hours. It’s important to note that breeding in captivity is rarely successful for this breed but it can happen. 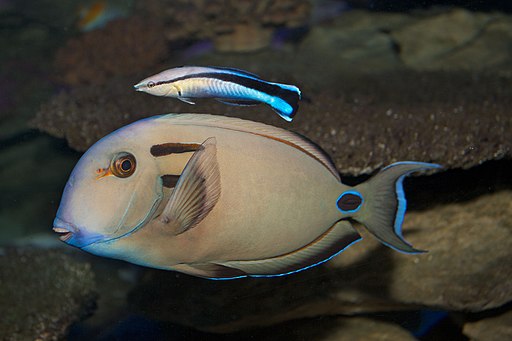 Feeding the Bluestreak Wrasse is unique and differs from other breeds commonly placed in tanks. Surprisingly, this is a carnivorous breed of fish who rely heavily on their environment to survive. The Bluestreak cleaner wrasse forms a symbiotic relationship with the fish in your tank. The Bluestreak will eat the dead skin and mucus build-up off your fish. They will also eat any parasites that appear in the tank on your other fish. Of course, there’s only so much skin a fish can shed, and parasites SHOULDN’T be present, which is why most of them starve to death in captivity.

A few blue streaks have been reported to eat meaty food such a shrimp, but for the most part, sustaining the diet of these fish is extremely challenging. The primary, preferred foods for the Bluestreak cleaner wrasse are small parasitic isopods, mucus, and copepod larvae (Grutter 2004 and 2000). In studies, these fish have demonstrated preferences for these foods and will deliberately seek them out.

The Bluestreak cleaner wrasse is a popular species that is often available at local fish stores and online retailers like LiveAquaria.com and Saltwaterfish.com. Before buying this breed of fish, you will want to inquire about how long they have had it, what they have been feeding it, and to ask to see it fed.  This fragile species should only be bought from reputable pet shops that closely monitor the health of their fish.

Yes, Bluestreak cleaner wrasses are hard to keep in a saltwater aquarium because they are notoriously picky eaters and most of the fish that are brought home end up starving to death within a few weeks.

Whether to Buy Bluestreak Cleaner Wrasse or Not

Hopefully, at this point in the article, you get it that the Bluestreak cleaner wrasse is an amazing fish. They are gorgeous, full of energy and so fun to watch. But please balance this with the understanding that they are notoriously challenging to keep alive. If you have a very large saltwater aquarium stocked (relatively) heavily with large-bodied fish, like some of the larger tangs, angelfish, etc., you may have a chance. If not, it is probably not an ethical or smart choice to bring this fish home from the store.

If you’re considering the Bluestreak cleaner wrasse as a short-term solution to an imminent saltwater ich infestation, also consider that the wrasse itself is not immune from ich and may succumb to an infection.

Quarantine with hypo salinity and/or copper treatments are really the only way to rid yourself of ich. If you are interested in watching the cleaner-behavior in your tank, there are two options that are much more suitable for more reef tank environments than the Bluestreak cleaner wrasse.

Check out these other cleaner species instead: