Every aquarist wants that little bit of elegance and character for their reef tank. And these sensational saltwater shrimp do the trick. Not only do you get some vibrant colors and patterns (always a plus), but you’ll also gain some extra activity and help around the aquarium. (Form AND function – how can you go wrong?) These six species catch the eye and interest of everyone that spots them scuttling around the tank. And once you learn more about them? You’ll fall in love, too.

Now, you’ll probably find HUNDREDS of potential crustaceans that work in saltwater aquariums. Invertebrates thrive around coral reefs. But not every shrimp or crab works for every tank situation. Some of those little decapods can spell trouble for your delicate coral polyps. That’s where this handy guide comes in. You get to find six saltwater shrimp that work in ANY aquarium situation (complete with gorgeous pictures to further your intrigue). Just reading the names in the links below should pique your interest! 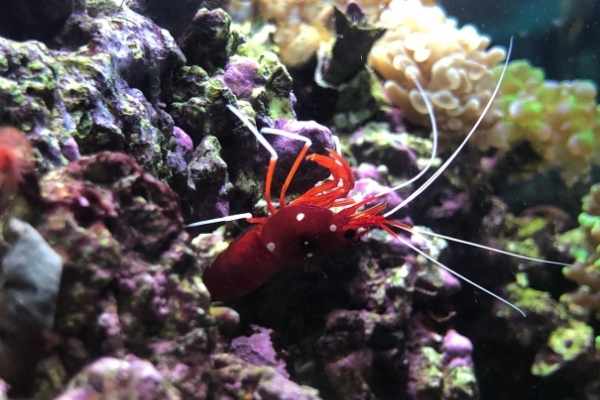 Aquarists recognize coral banded shrimp (Stenopus hispidus) right away. Those red and white striped claws stand out, even when the shrimp duck into hiding during the day. The enormous pincers put people in mind of a boxer – and you’ll find them called boxer banded shrimp for that reason. They’re one of the largest saltwater shrimp out there, with antennae stretching as long as their bodies. Yet they’re not expensive. (Probably why they were one of the first shrimp I owned). Members of the cleaner shrimp group, you’ll see your coral banded heading out in the evening to sweep the rock and sand for particles of leftovers. They also use their white antennae to advertise their cleaning services, removing pests from the fish in the tank. And if you have a bristle worm problem? They’re one of the shrimp that can help with the infestation. (It’s always nice when a saltwater shrimp decides to earn their keep)

The red and white pattern’s the most common, but you’ll also find three other color options. They’re different species but still in the same genus. And the care remains the same:

When it comes to pest control, peppermint shrimp (Lysmata wurdemanni) have earned a prominent place in the saltwater shrimp world. While on the small side (especially compared to the “monstrous” coral banded shrimp), peppermints have a taste for the dreaded Aiptasia anemones. They happily hunt down and eradicate the pest sea anemones that hobbyists often struggle to remove. And since peppermint shrimp like to hang out in groups, they can handle even the worst infestation in record time. Peppermint shrimp have red or pink bodies with thin red stripes – earning their (somewhat unimaginative) name. In addition to their pest control duties, they’re also members of the cleaning group of saltwater shrimp. The group happily ventures under cover of darkness to retrieve the detritus collected in the nooks and crannies of the tank. And if you’d rather keep a single peppermint on its own? It’ll manage (though they’re happiest in a group – one of the few saltwater shrimp to fit that category).

Aquarists enjoy peppermints as they tolerate cooler water temperatures. You can get away with dips into the low 70F/20C range. You DO need to make sure you check that label before you purchase your shrimp, though. Lysmata californica (the Pacific counterpart of the genus) WON’T survive in cooler water. They also won’t eat your Aiptasia for you. 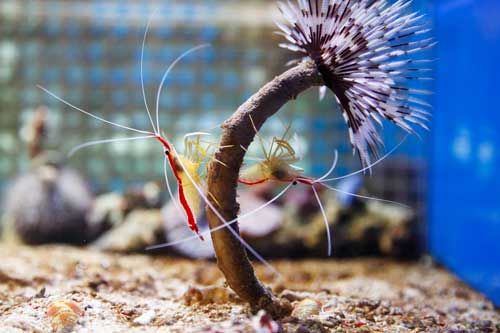 Working alone or in groups (they’re another species that does well with company), skunk cleaner shrimp set up cleaning stations for their fish tank mates. They pull away parasites, dead skin and scales, and even clinging algae. If you have obliging fish, you might even spot your shrimp climbing into a MOUTH to attend to their cleaning duties. They’re one of the best choices to have around – and your fish will appreciate them.

Skunk cleaner shrimp get their name from the solid white stripe down the back. It separates the red on either side, putting people in mind of the familiar mammal. (Don’t worry, there’s no odor to speak of) And, of course, those long white antennae to serve as an advertisement. As saltwater shrimp go, they’re not particularly large, but a group can operate a cleaning station without a problem. And the larger the group, the more active (and out in the open) your tiny crustaceans will remain. (Hint, hint)

There’s little doubt where the blood red fire shrimp (Lysmata debelius) got its name. The vibrant crimson color of this saltwater shrimp – with a few white dots and those long white antennae – is impossible to miss, even in a colorful saltwater aquarium. Throw in that you can (gradually) train these shrimp to remain active during the day, and you have an overall winner. With the proper food incentives, they’ll abandon their nocturnal ways. Then you can enjoy that pop of red ALL the time. Blood red fire shrimp have the white antennae of a cleaner shrimp. However, they’re not as gung-ho about the project as other saltwater shrimp. They ARE larger than some of the other species, though, allowing them to cover more fish. And since they’re known to pick at coral polyps, it makes them an excellent addition in fish-only tanks. They can pry off unwanted parasites without needing a big group to get the work done.

If you don’t want to put in the time to coax your fire shrimp into the daylight, you’ll need to scout around for them. They usually hang around upside down in a cave or under a ledge. (It’s not part of the “blood red” in their name, but it does call to mind Dracula) It’s a cute habit – and one you’ll want to show off to guests when they come over to visit.

“Reach for the sky, you filthy varmint.” If you’ve never encountered the pistol shrimp (Family Alpheidae), you may want to consider one. These saltwater shrimp have one enlarged claw designed with one purpose in mind: to snap shut and create a “bullet” of water. The water bullet is nothing more than a cavitation bubble. In other words, a cavity of air prone to collapse, generating a pressure wave and sound. (Ever played with bubble wrap? Same idea) When the bubble collapses (it’s a short-range bullet), it produces a tiny burse of light, a snap, and pressure. 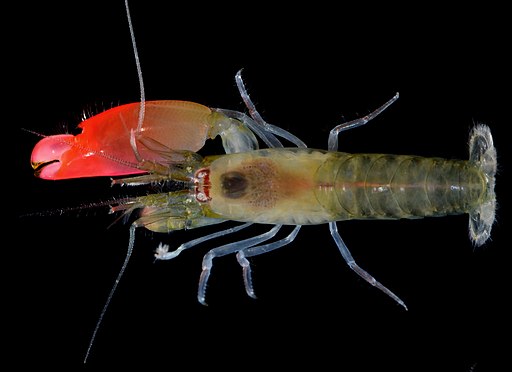 Depending on the species of pistol shrimp (and the size of their claw), that pressure can stun or even kill small fish. Most of the time, though, the water bullet is simply a means to impress other pistols infringing on a territory. The impressive part is the “snap” is audible to humans. You can hear the sound coming from your aquarium. And scientists have recorded pistol shrimp in the ocean. Those cavitation bubbles are impressive.

Pistol shrimp usually form symbiotic relationships with others. If they stay on the reef, you’ll find them pairing up with sean anemones or crinoids. But if they live in the sand, they usually form a partnership with gobies. Pistol shrimp don’t have good eyesight. So the goby stands watch over a tunnel the two share. When the goby spots trouble, it swishes its tail. Then the saltwater shrimp (with one antenna on that tail at all times) knows it’s time to bolt into the burrow.

You can usually purchase a “bonded” pair of pistol shrimp and goby. This is better than hoping to create a team. If you attempt to choose a random pistol shrimp and set it up with a goby, you may find the shrimp EATING its fishy partner. Other times, the two go their separate ways – and the saltwater shrimp ends up eaten by a tank mate. Fish stores will usually offer pairs for sale.

If you want one of the most beautiful saltwater shrimp out there, look no further than the harlequin shrimp (Hymenocera picta). They have splashes of bold patterns all over their bodies – and they’re kind enough to stay active and alert throughout the day (no special training required). It’s challenging to find a more stunning species to happily reside in your reef tank. And did I mention they prefer to hang out in pairs? (Yup, it’s a two-for-one bonus!) Unfortunately, there’s a downside to this too-perfect saltwater shrimp. And it’s their diet. Harlequin shrimp are specialists. This means they only eat ONE thing: Starfish. Unless you’re ready to spend the funds on fresh starfish every week (a chocolate chip starfish will keep a pair satisfied about that long), you shouldn’t consider bringing these gorgeous crustaceans home. And there’s no chance you’ll convince them to eat something (ANYTHING) else. They want starfish and nothing else.

On the bright side, if you’re finding yourself with an Asterina problem, these are the saltwater shrimp for the job. Those pest starfish will keep your harlequins happily hunting for as long as the infestation lasts. Of course, you’ll need a backup plan for when the Asterina problem is resolved. And that’s when some hobbyists run into problems. It’s one of the reasons people often end up admiring the species – from afar.

If you’re looking for a similarly fantastic shrimp but don’t want to deal with the starfish mess, check out the Sexy Shrimp instead.

Nothing beats sensational saltwater shrimp (you know you love the way that rolls off the tongue). And even if you aren’t sure about these particular species, you should consider adding at least ONE invertebrate to your tank. They add a different kind of activity to a reef tank. And you gain so many potential benefits with crustaceans. But if you’re not convinced, let’s see what other things you can learn to persuade you.

How about this YouTube video about the 5 best invertebrates for beginners?

5 Inverts PERFECT for Beginners! - Setting Up a Reef Tank

Want to explore some MORE invertebrate possibilities? Maybe something outside of the crustacean family? No problem:

Or, if invertebrates REALLY aren’t your thing, let’s click back over to the fish world:

Four of the saltwater shrimp on this list are ideally suited for life in any saltwater aquarium. They’re gorgeous and even practical. One (the peppermint shrimp) will clean up pesky Aiptasia sea anemones. Another (harlequin shrimp) will clean up your Asterina starfish problem. And – if you’re lucky – a few will even clean your fish of parasites. But buyer beware: Pistol shrimp and harlequin shrimp have some special care requirements that don’t make them an excellent fit for every situation.

Do you have a favorite saltwater shrimp? Please leave a comment below and share it with us!