The pistol shrimp is an amazing reef invertebrate. It isn’t quite as popular as some of the cleaner shrimp species, like the Fire shrimp and the skunk cleaner (for an excellent reason, I’ll highlight in a moment), but it certainly is just as interesting. Please use the links below to hop down to the section that interests you or keep scrolling to read the full article. 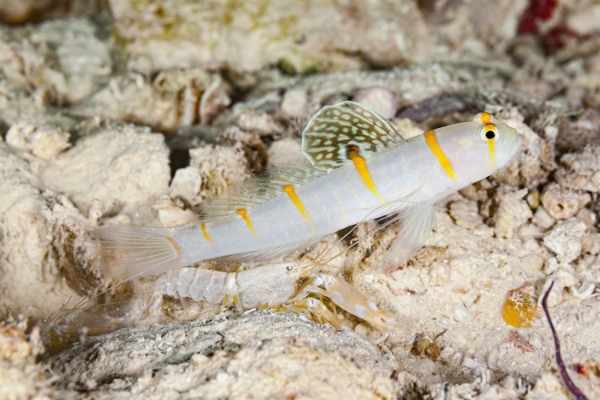 Watching the symbiosis between a shrimp goby and pistol shrimp is captivating.

There are two really fascinating aspects of Pistol shrimp behavior that make them a perennially interesting invertebrate: The first thing is their symbiosis with shrimp gobies (more on that in a moment), and the second thing is they use one of their claws as a weapon.

I know, I know, all shrimps and crabs use their front claws as weapons. But THIS is different. This pistol shrimp actually turns its claw into a weapon of mini destruction.

When prey is in range, the pistol shrimp “loads” its claw and shoots a bubble bullet that can be heard outside of your aquarium and stuns its prey.

Check out this 1-minute video to see it in action:

How cool was that? I feel bad for the cool-looking skunk cleaner shrimp, though.

It doesn’t take the most active of imaginations to see where this crustacean gets its common names. You will sometimes see it sold as a Snapping shrimp. Curious to hear what it sounds like in a home aquarium? Check out this video. It shows a pistol shrimp in super-slow motion. You can hear the clicks and, at super-zoom, even see the gun ‘smoke.’

Spoiler alert, the ‘smoke’ is bubbles, but still very awesome. 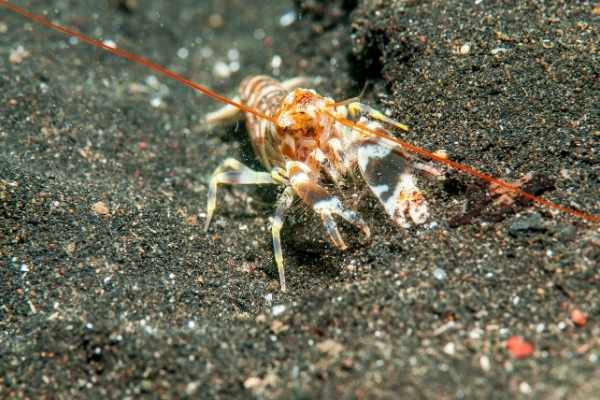 How the pistol actually works

The pistol shrimp generally has one claw larger than the other–the larger claw is the gun. When the crustacean is defending itself or hunting, it clicks the claw open, which sort of looks like cocking the hammer on a gun. When it is ready to fire, the claw snaps shut and fires a bubble that shoots out water moving as fast as 60 mph, hopefully stunning the target (either prey or predator), and makes a noise that is loud enough to be heard outside the tank.

As if the amazing bubble-bullet snapping behavior wasn’t a cool enough reason to think about putting one in your own saltwater aquarium, another great reason some people keep the pistol shrimp is to watch their symbiotic relationship with a few goby species, like the yellow watchman or Yasha gobies. Here is how the symbiosis between a snapping shrimp and a shrimp goby works:

Pretty cool and one of the main reasons people keep Snapping shrimp in their tanks. 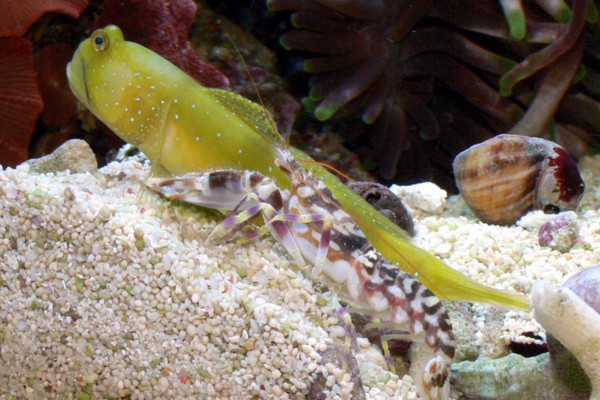 There is no guarantee that your fish and invert will pair up if you buy them separately. Many frustrated owners have posted about two individuals that have spent a long time together, never to have ‘found’ each other.

The best way to ensure a pair is to buy a pair that is already bonded. You will pay a little more, but it is worth it.

Pistol shrimp will pair up with As you can see from the two videos, the snapping shrimp is a hunter and is not compatible with other small snails, crabs, shrimps, or even other small fish (that isn’t the goby they are paired with).

Other than that, they are considered to be “reef safe” because they won’t bother corals or larger fish. You would, of course, want to avoid keeping it with other larger fish species that would consider it to be prey, like a hawkfish, lionfish, etc. 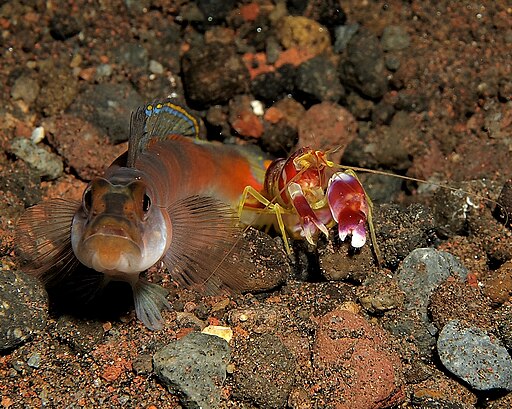 Most pistol shrimp prefer to spend most of their time in the dimly lit areas in and around their burrow during the day, venturing out a little more boldly at night. If you give them a nice sandy or crushed coral substrate, they will spend lots of time digging out and tidying up that burrow or digging out underneath some of your rockwork.

Snapping shrimp, when not hunting, are opportunistic scavengers, which means they will clean up left-over food in your tank, which makes them pretty easy to feed. They’ll eat just about anything, including flakes, pellets, or thawed frozen foods.

To ensure it gets enough food to eat, you may want to consider dropping a sinking pellet or two near the cave periodically.

Is this the right invertebrate for you?

The Pistol Shrimp or Snapping shrimp is certainly not appropriate for every tank. While they are easy to feed and are technically considered to be reef safe, by most, they will often harass and kill most of the other small, mobile invertebrates in your tank. So if you want to have hermits or other shrimp, you might want to take a pass on owning this beauty.

If, on the other hand, you are mesmerized by the digging or symbiotic relationship with a goby and don’t mind the fact that you won’t be able to keep other shrimps or crabs with it, it could be a great addition to your tank.

Have you ever kept them? What has your experience been?

If you enjoyed this article and want to learn more about other interesting invertebrates, check out:

If you want more resources to help Building a Better Saltwater Aquarium, please.