If you’re looking for a challenging, unusual invertebrate to add to your tank, take a look at the Aplysia Sea Hare Slug Due to the possible toxins, a sea hare can release, and it’s specific care requirements, this species is considered very difficult to keep. It’s recommended that only expert-level hobbyist attempt to take on this fascinating invertebrate because it can be quite risky to care for them in a community tank. Be careful and weigh the pros and cons carefully before adding one to your tank.

In the wild, Dolabella auricularia and other Aplysia family sea hare slugs enjoy living in slow-moving ocean waters and is camouflaged to blend in with its food, while it is eating and improve their odds of becoming food for something else. These sea hares inhabit the Indian and North West Pacific ocean. They’re known to hide in the sand, mud, or in patches of seagrass to avoid drawing attention to themselves. The coloring of this species helps them to blend in with their natural surroundings. Dolabellas are only active at night, further helping them avoid predators–which makes them a bit less interesting to observe in the home aquarium. 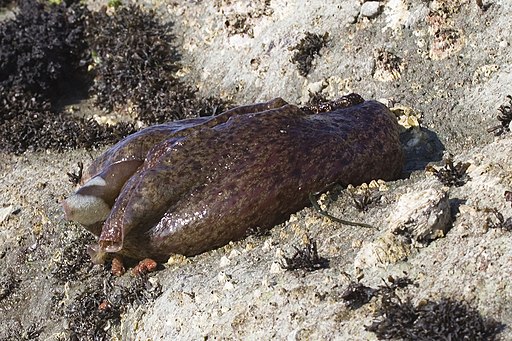 Perhaps the first, most obvious consideration about the proper aquarium conditions to raise a sea hare it to look at its maximum size, at full maturity. This amazing invertebrate grows up to 16 inches in length! Think about that. This factoid can elude the casual onlooker at the local fish store because they can be sold at much smaller sizes.

Based on the size of the invertebrate alone, the minimum tank size to care for a sea hare at home should be about a 75-gallon tank.

The tank will need to be slug-proof as it’s not uncommon to see sea hares get sucked up into the filter. You will also find that an Aplysia sea hare will try and redecorate your tank regularly by clumsily knocking things over. It could be rocks, decorations (if you have them) or even coral frags. Watch out below!

Like almost every other invertebrate, the sea hare has a sensitivity to copper. If you have copper in your water, it will kill your sea hare.

The sea hare will do well in a tank with a sandy substrate and particularly a deep sand bed because they love to burrow in the sand. In the inevitable event your sea hare dies, you must be ready to remove it from the tank immediately, or it could catastrophically contaminate your tank. This is because of the poisonous ink they have inside them and use to protect themselves. More about that later. 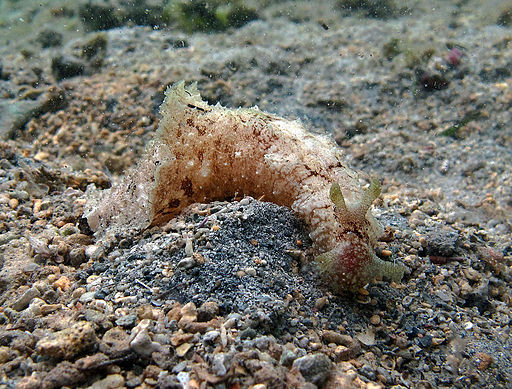 They will do best in your tank if you are able to maintain stable, reef tank aquarium water parameters, which you can easily achieve if you make your water with one of the best reef salt mixes and regularly test your water and perform water changes, as necessary to maintain those levels.

As mentioned above, Aplysia sea hares are aggressive algae eaters and are often purchased for the purposes of cleaning up a problem algae infestation with hair algae or other notorious troublemakers.

Keep in mind that an Aplysia sea hare can grow large quite quickly–which makes it even harder for you to grow enough algae to keep them fed. you intend to keep this animal in your tank, over the long run, you will most likely have to feed it daily with sheets of dried macroalgae, like nori, although some individuals might not take prepared/dried algae like that.

Since sea hares like the dolabella are so adept at taking care of algae problems, some shops rent them out to help keep them properly fed and help aquarium owners get rid of problem algae.

The Aplysia sea hare itself is a docile, non-aggressive invertebrate that shouldn’t cause any compatibility issues on its own. However, there is one interesting behavioral trait about these amazing gastropods that makes them incompatible with any other aggressive species that might pick on it.

The sea hare slug might look vulnerable to predators since it’s this large, squishy body, but when they become threatened, they have an unusually bioweapon that they use to protect themselves: they release a noxious ink that irritates the would-be predator and stops them in their tracks, in much the same way a skunk protects itself.

That works great, in the wild, where the sea hare can escape into a rock, or the sand and the predator swims away while the ink dissipates in the ocean water–but in the confines of the reef aquarium, there is nowhere for the ink to dissipate to–which can cause some big problems.

How To Handle Inking from a sea hare

If your Aplysia or wedge sea hare has inked, then you need to act quickly to remove the substance from the water. A charcoal (activated carbon) filter should work, chemically speaking if you can get the water purified through the filter rapidly. Dispose of the filtration media once the coast is clear. Try to identify what caused the sea hare to ink, and either remove the problem or closely watch the tank. If the cause of the inking is a semi-aggressive fish, remove them from the tank.

All sea hares are hermaphrodites, which means each individual has both male and female reproductive organs, which would make establishing a pair easy, in theory, however they are considered to be difficult to breed in the home aquarium.

Even though sea hares are hermaphroditic, they are not self-fertilizing, so two slugs are required to breed. In the wild, Aplysia californicus and other sea hares sometimes mate in chains of three or more individuals. A large chain of slugs can produce up to 80 million eggs at a time. They tend to mate in and lay their eggs in the seagrass in coastal waters.

Once the eggs are laid, they will hatch in 10 to 12 days’ time. They become free-swimming larva that after 30 days, search out algae to attach onto. Once attached, they will feast and double their weight every ten days.

Where to find an Aplysia sea hare for sale

Sea slugs like the aplysia family of sea hares are still relatively rare, in the saltwater aquarium hobby–because of their specialized eating requirements and the dangers of inking. As such, it can be a bit challenging to find them for sale. Your best bet is to phone around to the local fish stores (particularly the more specialized stores) and check out the popular online retailers that do have them listed on their sites. 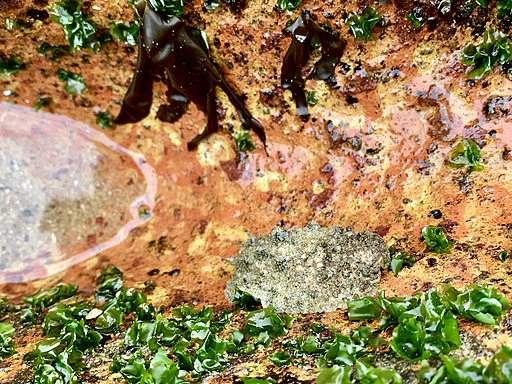 Whether to Buy a Dolabella Sea Hare or Not

Some people would put an argument forward that raising a sea hare in captivity is a bit of an ethical issue–because if you don’t keep up with the feedings, they will starve. So if you do decide to add one to your tank, please have a good plan for what you want to do once they clean up your tank. They have big appetites and need a lot of green stuff to survive.

Another area of warning is that if your sea hare gets spooked and ‘inks’ in your tank, you could suffer some pretty significant losses. Make sure you have a high capacity activated carbon filter running, just in case.

With that said, if you have a massive algae problem or just have a soft spot for the soft-bodied sea slugs, this article should help you figure out if they are something you want to add to your tank.

If you are having serious issues with hair algae or other problem algae, consider getting an emerald crab instead. While far from perfect, (all crabs are opportunistic eaters and might take the opportunity to eat something you don’t want them to), the mithrax crab, if it causes problems, will cause problems much more slowly than a sea hare.

Learn about the emerald crab

If you (like me) have decided that the sea hare is fascinating but too risky to add to your tank, you might be interested in keeping one of these other fascinating and beautiful invertebrate species: