Last night, I performed a little surgery in my reef tank to eradicate a notorious pest in the saltwater aquarium world–I found the dreaded aiptasia anemone (sometimes spelled aptasia on forums) on a coral I recently purchased. After carefully inspecting the subject (a piece of live rock with mushroom corals on it) to look for areas that would complicate the surgery, I marked the area for my incision and began the surgery.

Prepared for surgery to eradicate the pest anemone

My tools were crude but appropriate for the job: a beat-up, old pocket knife, and a hammer. The goal of the operation was simple: remove the aiptasia from the live rock before it became a problem. Unfortunately, the nagging on my conscience didn’t happen until the day after the surgery. 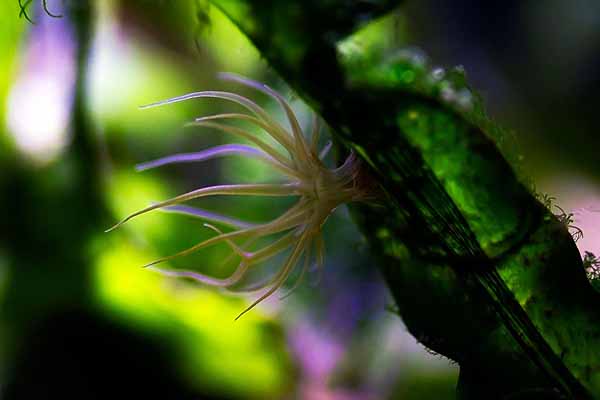 In my mind, there really wasn’t a decision to be made. A month earlier, I bought the mushroom rock from a local fish store. The aiptasia anemone was attached to the underside of the rock, unable to be seen in the display case–but less than an hour after putting the rock in my tank, the aiptasia “bloomed” in front of me, extending its finger-like tentacles out from a crevice that otherwise seemed too small to have anything visible living in it.

Death (to the aiptasia) by chemical burn

I immediately set my mind to extermination and eradication of the evil aiptasia pest. I prepared a batch of super-saturated calcium hydroxide by mixing enough powder (also called kalkwasser) until the powder just sat in the bottom, undissolved. I sucked up a bit into an eyedropper and blasted it with a few squirts of the solution. The aiptasia retreated into the crooked crag–and like George Bush in that famous picture on the aircraft carrier–I declared victory.

A little while later, the aiptasia popped back up again. That’s when I was inspired to take a different approach–surgical removal. I knew it would be foolhardy (has anyone else used the word foolhardy this century?) to cut the aiptasia out with a razor blade–I’ve tried to scrape soft corals and mushrooms in the past and knew that even the tiniest bit would grow back–so I set out to remove whatever chunk of rock was necessary with the aiptasia.

On the one hand, I am happy to report that the surgery appeared to be a success. Using the pocket knife as a chisel, I tapped it with a hammer and splintered off a few pieces of the live rock (Fiji rock, by the looks of it). Sure enough, the pest was attached to one of the larger chunks. The score was all tied up:

I pulled ahead when I dumped the chunk of rock (with the aiptasia on it) unceremoniously into the trash can. It wasn’t until this morning that I grew a conscience, which is why I was inspired to write this post.

Truthfully, the anemone did no harm in my tank. The mushrooms were a reasonable distance away–and it was actually just a single specimen (for now). If the aiptasia happened to be a sponge, coral polyp, or even a lowly amphipod that hitchhiked its way into my saltwater aquarium, I would have been thrilled and thrown a party in my nerdery (that’s the room where I have nerd parties, of course).

They are actually quite beautiful, in their own way. 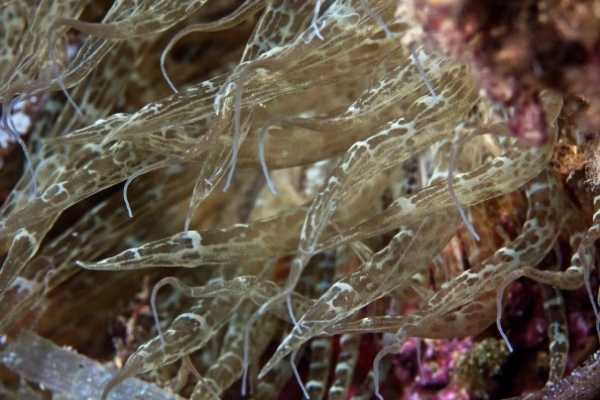 But, instead of being one of those beneficial hitchhikers, it was one of the universally despised kind–just a small step up from a bristle worm–, and that got me to thinking–why is it that we automatically, unilaterally declare war on aiptasia anemones?

A vicious stinging machine? Or just trying to survive like everything else in the tank?

The first and most obvious reason to hate aiptasia is that it will sting anything that it touches–including your prized corals (if one of them were to wander into the wrong neighborhood). But is that really a behavior punishable by death by chemical burn (remember the calcium hydroxide solution)? What about LPS corals and other anemone species–they all have stinging cells–and they are prized additions to any tank–so stinging, on its own, certainly isn’t worth the pest status. 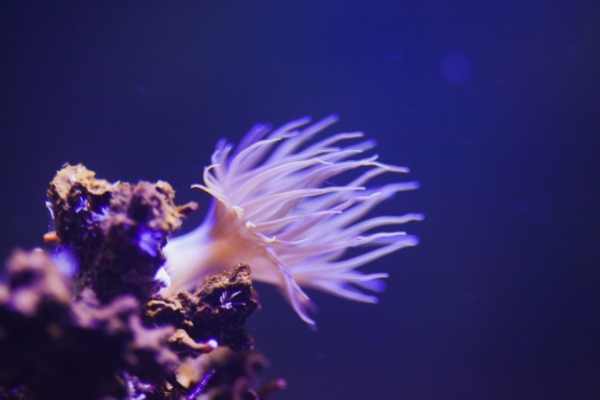 They will overgrow your tank.

Another reason to despise the lowly aiptasia is that, left unchecked, it will overgrow your tank. If I was an SPS purist–I could see some merit to this argument–but in my case, my aquarium currently has Xenia, Green Star Polyps, Zoanthids, Mushrooms, and some Leather Corals. Ah-hem, hypocrite, party of one…

All of those corals could be considered weeds, and given sufficient nutrient load in the aquarium water (and an ability to get from one rock to the next) would overgrow a tank. Yet, the general consensus among hobbyists isn’t that those corals should be shot on sight (the minority of extremists excluded for the convenience of my argument). If the definition of ugly is that they won’t fluoresce under the blue lights–then I suppose yes, they are ugly. But there is a little bit of beauty in them. Sure the color is the same as a Kenya tree (only more translucent). Still, the tentacles are long and thin…almost creepy (in a good way)–and if you’ve ever seen them in action, you’d see that they are eating machines–they are way better at eating coral food than the corals are–which is kind of an impressive achievement.

So why is it so easy to declare war on these creatures?

I realized that the aiptasia anemone is just one of a long line of creatures in this world that drew an unfortunate lot of being labeled, by the majority, as undesirable. Like the dodo bird, just about any snake, shark, or spider ever in existence, and countless other living creatures–the aiptasia is a pest, will always be a pest, and should be vanquished on sight.

It’s just a strange coincidence/misfortune that in addition to being the bane of the aquarium, the aiptasia is also everything you would objectively want in an aquarium creature–it is hardy, reproduces easily in captivity, greedily accepts prepared foods, and is almost bullet-proof.

You can burn it, cut it, scrape it, and it will grow back. You know what–I just figured it out–it must be a witch. That is why we must kill it.

To the aiptasia I killed last night (without thinking about it), I’m sorry. For a guy who prides himself on being a humane, nature-oriented individual, I see some brutishness in my actions last night that I wish I had thought about BEFORE I acted. I think I’ll let the next aiptasia go and see what happens.

Now, enough blogging–I have some bristleworms to catch. The problem with bristleworms is that it’s impossible to tell the good ones from the bad ones. I may try this new technique that hasn’t been used in a while…it’s called a dunking chair. You dunk the bristleworms in freshwater. Only the evil ones survive. Has anyone else ever tried this method of determining the good from the bad?

There are a few important things that happened that are worth updating you about. The first thing is that…despite my guilty conscience…I didn’t kill the little stingy aiptasia. And, because I grew a conscience while I wrote the article, I decided to let the aiptasia anemone go and see what would happen.

You’re probably not surprised to find out…they spread throughout the tank. They are everywhere–even, or maybe especially, in the sump. They are eating machines, snagging anything that floats in the water. I also expected them to creep along and reproduce a bit like xenia, creeping about and leaving a tiny piece of the foot behind, but they don’t–they flat out ‘jump’ from spot to spot and will show up across the tank (or in the sump) overnight.

I think the reputation for them being stinging machines may be a bit over-stated. I see a lot more damage from coral-on-coral warfare in my tank than I do from the anemones.

The only area they haven’t penetrated is the area with the green star polyps. They have invaded green star polyp territory, but they have never secured a foothold. The GSP just grows right over them. Game over. Any other rock, they seem to do ok in. I truly don’t mind them. I consider them corals. Next, I plan to try out some natural ways to control the population and report back on the outcome.

In hindsight, I do wish I got rid of the aiptasia before it got a foothold in the tank–but I’m not all that bummed about it. Sure, my tank is now unpopular and contaminated, but I’m mature enough to not mind it. These things are impressive, aquarium survival machines and are fun to watch grow in their own right.

Now I just need to come up with a clever name and sell them as a designer anemone–something like Al’s Bam Bam Anchorman Aiptasia and sell them for $20/polyp. Any takers?

The article was written by Al Ulrich.

If you want to learn more about fighting some other common aquarim pests, check out these other helpful articles: