Let’s face it, it’s a fish-eat-fish world out there. Carving out a niche and surviving is a full-time job. One of my favorite survival strategies among animals is mimicry–and we’re fortunate to have several great examples of mimicry in saltwater fish.

If you want to jump right into things, you can scroll down to see the first case of mimicry in saltwater fish for yourself, but it might be helpful to provide some background about the few interesting types of mimicry that will be shown in this article:

The first, and perhaps most well-known type of mimicry is called Batesian. It is named after Henry Walter Bates, who put forward a theory that this visual copy-catting is an evolutionary adaptation/strategy that helps avoid predation.  Batesian mimicry occurs when a relatively harmless species imitates the coloration patterns of a species known to be toxic or have harm-inducing defenses. It’s sort of a distastefulness-by-association approach, where the harmless animal benefits by association, while the species being copied is largely unaffected.

Another type of mimicry displayed by saltwater fish is called self-mimicry. This is when the appearance of one part of the animal copies another part of the same animal. A great example of this can be seen in Figure 8 pufferfish, where the mottled pattern makes it challenging for a predator to make heads-or-tails of them, which in turn provides a survival advantage to the pufferfish who either escapes without harm or is less likely to sustain a life-threatening attack to head.

This is an almost devious survival strategy where an aggressive animal copies a harmless or even beneficial animal. The deception allows the aggressor to get unrestricted access to unsuspecting prey. Eyespots located near the tail are a classic example of this.

The first cool example of mimicry in saltwater fish is between the cleaner wrasse and the false cleaner fish.

Here is the Cleaner Wrasse: This is the cleaner wrasse

This is the False Cleaner Wrasse: 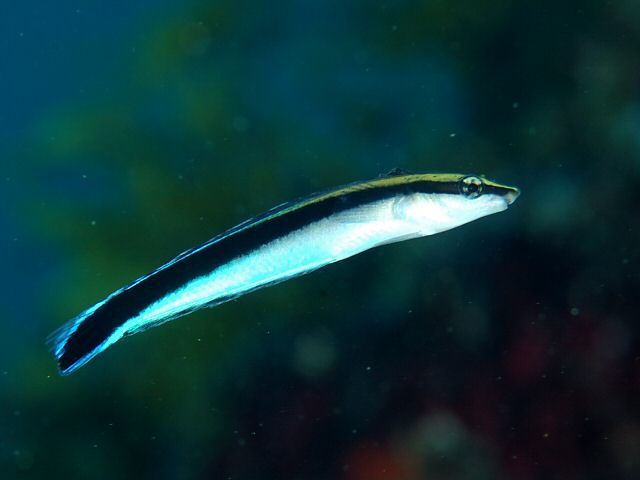 Instead of cleaning parasites off the host, this aggressive mimic will actually bite them instead.

The insidious false cleaner uses mimicry to trick unsuspecting fish into allowing a cleaning. But this fish doesn’t have parasites in mind. It plans to take a bite out of their guest. The false cleaner fish goes to great lengths to keep up their charade. They even inject a painkiller at the site of the bite to numb and prevent detection. Amazing.

The coral catfish, Plotosus lineatus, stay huddled in shoals and look a bit like tiny black eels. But these “eels” can “fight back” if swallowed by a larger predator because they have protective venomous spines behind their dorsal and pectoral fins. The coral catfish is protected from predators by venomous spines

Juvenile engineer gobies are thought to exploit that and imitate the coral catfish. This is a classic example of Batesian mimicry. Can you tell them apart? Close up of engineer goby

When the two spot signal goby, a Batesian mimic, scuttles about the seafloor with its fins extended, it does its best to imitate the look and motion of an angry, hard-shelled and clawed crab, rather than a soft-bodied tasty fish stick, tricking otherwise would-be predators into selecting an easier meal. This two-spot signal goby looks like a crab as it scuttles across the ocean floor.

The backline blenny is a fang blenny, which means it can protect itself with a venomous bite. When threatened, this fish will use venomous fangs to bite and defend itself.

A few other related species, like this Mimic blenny, are thought to get the benefit of the doubt by copying their look. Judge me by my looks, do you? This harmless, algae-eating blenny hope you will.

Take a look at the fangs that a fang blenny has. No wonder this survival strategy works. Ouch!

My, what large teeth you have!

The Saddle toby is poisonous to most things that might try to eat it, which is perhaps why the non-poisonous Mimic Filefish looks just like it. In a display of Batesian mimicry, this tilefish looks a lot like a poisonous toby, but it isn’t. Perhaps one of the most famous examples of imitation among saltwater fish, the Marine betta will rest with the front two-thirds of its body concealed in live rock and extended back-end. In this way, the peaceful Comet looks like a toothy predator with a bad attitude, tricking predators into passing by. 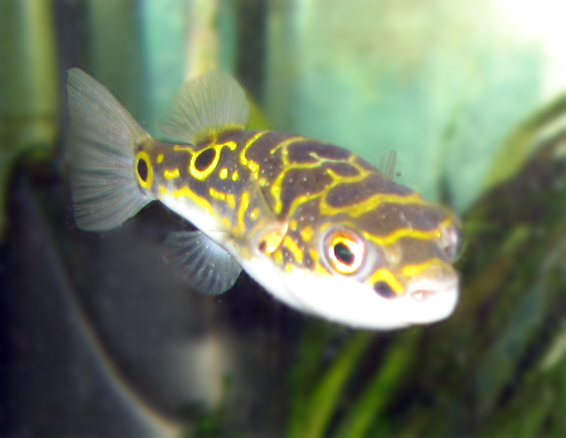 Batesian, Self, and Aggressive mimicry are three amazing evolutionary adaptations employed by or imposed on some of the most popular saltwater aquarium fish in the hobby. If you’re like me, you gotta love the player and the game.

If you liked this article you may also enjoy reading: