The Marine betta, or Comet, is a strikingly beautiful, peaceful, and shy animal that will add stopping power to any reef aquarium. Their iconic black and white camouflage pattern (many tiny white spots on a black background), large, lobe-shaped caudal fin, and prominent posterior (rear-facing) eyespot are the sources of the most interesting visual and behavioral elements of this beautiful saltwater fish. Let’s dive a little bit deeper to see what it takes to care for the Marine betta.

In addition to providing striking beauty, the coloration of the Marine betta is also thought to provide double protection from predators. The first defense is that the pattern makes it very difficult for predators to figure out where the head is. This pattern interruption may cause a predator to pause, long enough to escape. Just take a look at the image above. Note how difficult it is to locate the fish’s eye.

Also take note of the very prominent eyespot on the lower, posterior portion of the dorsal fin. If a predator has to make a fast judgment, it may be fooled into thinking the eyespot is the eye and therefore the head is facing to the right (in the image above), instead of the left. That confusion may make a predator more likely to direct its attack towards tail-end. This is advantageous for the Comet because it makes it less likely to sustain a life-threatening injury (the vital organs are near the head) and also directs the attack behind the fish, allowing it to swim ahead and away from the threat.

When not swimming about, the marine betta makes further use of this camouflage to mimic the moray eel. 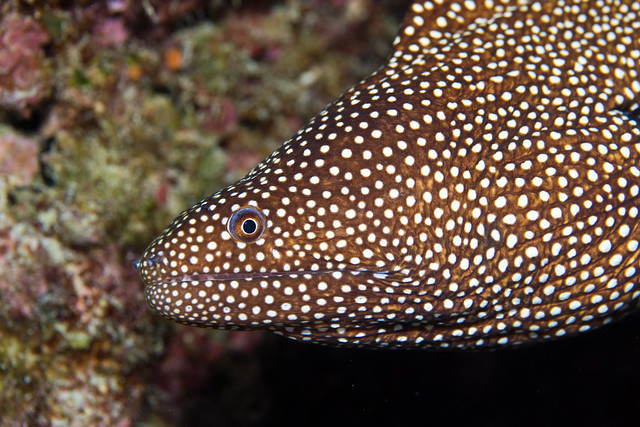 A no-nonsense, even grumpy and aggressive reef inhabitant that might actually be planning to dine on the predator. In the eat-or-be-eaten reef world, being confused for mean old predator helps keep the marine betta off the menu.

Would you want to mess with this mouthful of teeth? Yikes 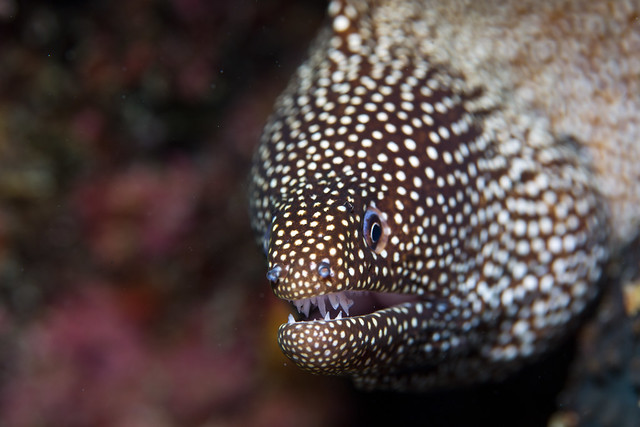 It’s a lot of fun to watch this mimicry at home.

Scientific name and common names for the Marine betta

The scientific, or formal name for the Marine betta is Calloplesiops altivelis. Recognizing that both common names: betta and comet are also used to describe ubiquitous and inexpensive freshwater fishes. Although all bony fish are thought to share common ancestors–the marine betta is a fairly distant relative of the more common, hyposaline (hahaha, that’s not a real thing) Pisces. The marine betta is in the Plesiopidae family, which makes them more closely related to the assessors.

The marine betta is primarily a meat-eater (carnivore), preferring smaller saltwater fish, shrimp, and the like. There are a lot of reports of this fish being a bit reluctant to take to prepared foods in the home saltwater aquarium. The individual in my tank was reported to be regularly taking frozen brine shrimp at the local fish store, and I still had some trouble acclimating it to prepared foods.

My marine betta is a fiend for live blackworms. Those are its favorite food. Luckily my closest pet store (ironically, not a saltwater aquarium shop) routinely has them in stock. This is how I acclimated my fish to take other foods.

For starters–I tried to feed frozen brine shrimp, like the local fish store. But the presentation of the non-living food, in my tank, did not entice my comet to eat. Day 2, I switched to frozen Mysis. Still no luck. Alternated both foods for about a week–at which point I was a bit concerned and ‘gave up’ on the frozen foods for a while. I switched to predominantly live black worms for a long time (weeks) until I knew all were very fat and very happy.

At that point, I started feeding frozen brine shrimp in my Innovative Marine Feeder, on the same day and time as the blackworms. After a few days, out of hunger and (seemingly) peer pressure or feeding frenzy type instinct, my betta started eating–att first, spitting out and rejecting the shrimp.

A vacation came up, interrupting this flow–at which point, I went back to blackworms the week before to fatten up all the fish (for the upcoming fast while I was on vacation).

Upon returning from vacation (week-long), every fish was more than happy to accept, and swallow, the brine shrimp.

I don’t propose this is an optimal protocol–and to be honest-with the risk of starvation and food competition in a community tank, I’m not convinced there is one true, optimal protocol. But, as always, I try to share my own experiences here transparently, even when I mess up.

Key themes advice for your acclimation

The key themes/takeaways are hopefully this: hunger can be a motivator but don’t wait until your fish is starving. Maintaining a schedule that reinforces–this is food and this is feeding time, probably does help (my fish tend to know it’s feeding time). Behavioral cues from other fish can stimulate sampling of food, even if otherwise the instincts are to pass. Swapping in or tapering in YOUR preferred food, while they’re hungry, before giving them THEIR preferred food will sometimes work.

Reef safe or not

The Marine betta is technically a reef-safe fish. It will leave your corals alone–and quite frankly, will leave most of your fish alone. They may eat small fish, if hungry, and may also make a snack of your ornamental shrimp. Other than that, they are great community reef tank fish. I recommend them highly.

Whether you buy a wild-caught or aquacultured marine betta will likely influence the difficulty level of caring for this fish. Wild-caught bettas are more likely to prefer live foods and are shy, picky eaters (as mentioned earlier), which is the primary difficulty in caring for them. They also generally don’t prefer the bright aquarium lights and boisterous community fish, so they may be shy (and therefore also less likely to eat…again) when first introduced. Over time, my experience has been that even shy, wild-caught fish do become bolder over time and will learn to accept prepared foods.

Once, settled they are easy to care for. My marine betta is now actually so bold, he looks for me and swims up, eagerly looking for food, each time he sees me. I don’t really have a great way to explain this other than to say, the nature of this behavior is much more pet-like than my other fishes.

My clownfish waddles up and close by, but somehow looks…not so smart. The yellow tang, angelfish Chromis and cardinalfish may notice and start zipping through the water, anxiously, but the Comet swims up and suspends, eyes moving in their socket, somehow more thoughtfully considering the food. In this way, they remind me of a freshwater oscar.

Given the right care, your Marine betta can and should live for years. I look forward to many more years with mine.

The Marine betta is a generally peaceful fish that will probably avoid interacting with the other fish in your tank unless the fishes are small enough to become targeted as prey/food.

They will also likely try to consume any cleaner shrimp, but other than that, they are largely compatible with other moderately tempered community fish. I would not introduce a new Comet to a tank with semi-aggressive and territorial fishes, because that might otherwise lead to stress and starvation since Calloplesiops altivelis is already naturally shy.

When determining the minimum sized tank to keep these fish–please consider the following two traits:

As such, the minimum tank size is probably somewhere around 55 or 7o- gallons.

They are used to hiding in, behind, and among the live rock, so best to have a tank with sufficient live rock and places to hide. It is important, too, to make sure some of those rocky areas provide some protection from the white-hot (and, I guess, blue-hot) lights. I know those big eyeballs may be hard to see, because of the pattern, but just like the big bad wolf, those big eyeballs are to help them better see you, at night.

Hanging out in the rocks helps cut the brightness and helps them acclimate.

You should expect your Comet to spend most of its time in and around the rockwork of the tank. For best viewing, create some ledges, overhangs, caves, crevices, and other fun places towards the front and edges of the tank. They will likely pick the spots most comfortable for themselves (which can be sometimes frustrating when the PERFECT SPOT is RIGHT UPFRONT), but give them some time and space and they’ll be more visible.

They will be highly visible when it is feeding time, or just about any time you walk over to the tank, once they connect your appearance with the chance for a bite to eat. I also see mine more visible when the white-hot lights are off and the blue lights are on, during dawn and dusk simulations. 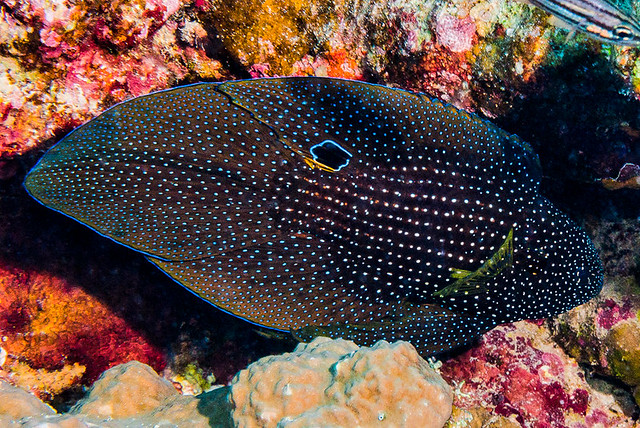 The marine betta has been successfully bred in captivity (Wittenrich 2007). As you may have guessed already (or not, it’s okay if you haven’t, hahaha, that was a judgy statement by me, wasn’t it? I started out by editing and re-writing, then thought it was funnier to leave as is. Hope you don’t mind, hahaha…)

Whether or not you have guessed, since these are relatively shy fish, that like to hide in your live rock structure, breeding the fish would likely most easily be accomplished in a dedicated breeding tank.

Wittenrich 2007 recommends shrimp, squid, algae in a gelatin food for conditioning them to spawn. Although I haven’t bred them (yet? they are one of my bucket list fish), that seems a bit challenging to me. My n=1 experience is that they are picky eaters. While Matt’s experience is real and he is an accomplished breeder and literally, a credentialed expert in this field (…if you consider a Ph.D. meaningful…psh…), I humbly offer the addition of live foods, like black worms, Mysis shrimp and brine shrimp, for your consideration, too. Those are the types of food that make my marine betta the greediest eater.

When they are ready, females reportedly lay a 300-500 bundled mass of eggs, attached to a cave wall. The male will guard the eggs until hatching.

7654e between 300 to 500 eggs per breeding cycle. Once the eggs are produced, the male will guard them and become more aggressive.

The eggs typically hatch after dark on day 6. Larvae are about 4mm long and are relatively good hunters. They are large enough to take newly hatched brine shrimp around day 9 and complete metamorphosis around day 15. (Wittenrich 2007). If you want to learn more about breeding these fish or any other saltwater fish, I strongly recommend Witt’s book, referenced a few times here. It’s a great book.

Check out this short video about the Marine betta fish

The Marine betta is a sometimes challenging to acclimate but always beautiful and largely peaceful community saltwater aquarium fish. They will take a variety of meaty prepared foods, can learn to recognize you, and will come out to see you when you walk in front of the tank. They are interesting to observe and will quickly become one of your favorite fish in the tank.  Based on the challenges you may have in acclimating them to your preferred foods and the relatively high price tag, they are recommended for hobbyists with at least a year of easy-street reefing under their belts.

What do you think about the Marine betta? Please leave a comment below with your thoughts or questions