Let’s talk a little about caring for the Banggai Cardinalfish--one of my absolute, all-time favorite saltwater fish.

Banggai’s are commonly available as aquacultured saltwater fish. Banggai cardinalfish are the easiest saltwater fish to breed once you get them paired up, but pairing them up certainly is a challenge. 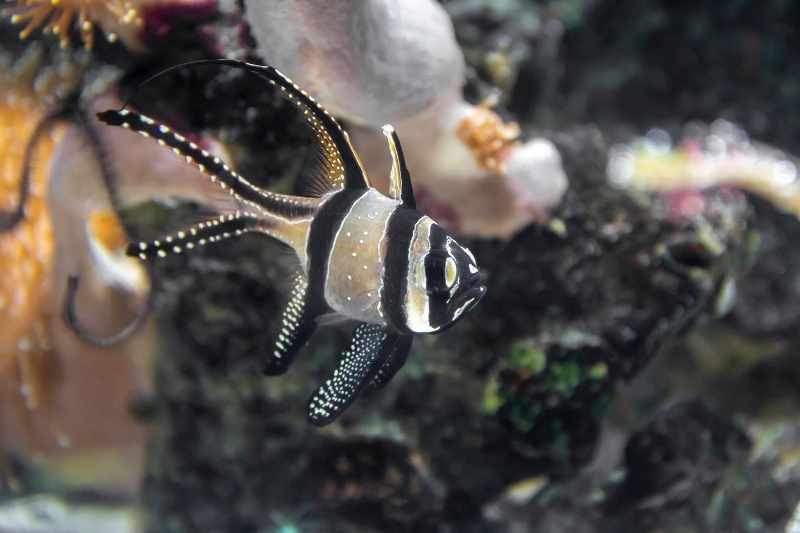 The minimum tank size for a single Banggai Cardinalfish or a pair is 10-gallons.

For more information about water parameters, check out this article.

Are Banggai Cardinalfish reef safe? Easy to care for?

The Banggai Cardinalfish, Pterapogon kauderni, is a reef-safe tropical saltwater fish that will peacefully coexist with corals, clams, crabs, and shrimp in a mixed reef tank. They are also an easy-to-care-for aquarium fish that is peaceful to most other community fish, except for others of the same species. 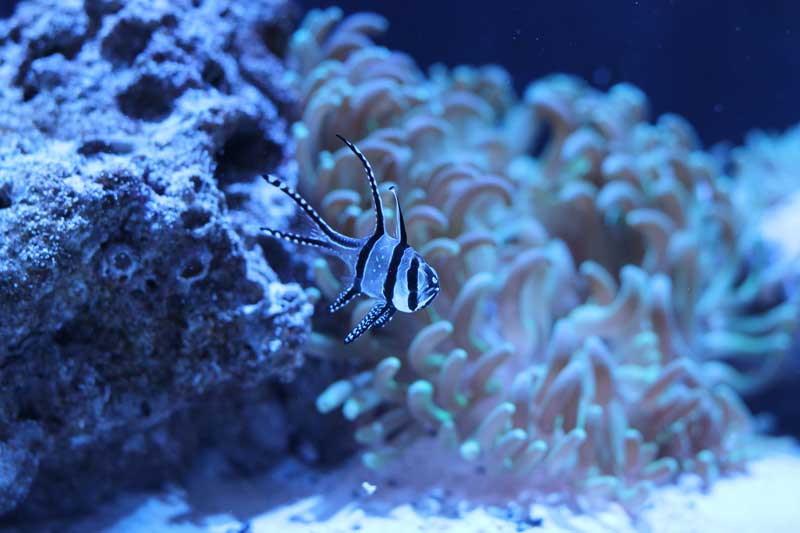 Often sold when they are 1-1.5 inch juvenile fish, they grow to be about 3-inches as adults.

Unlike some other easy-to-breed saltwater fish, Banggai’s are NOT hermaphrodites, meaning they will not change gender throughout their lives. With some other saltwater fishes, like clownfishes or dottybacks, those fish are born with the innate ability to change genders (typically just one time, with no going back) to help ensure a male/female connection based on the populations they are living in.

On the other hand, Banggai cardinalfish are born either male or female. Therefore, acquiring a bonded pair involves housing compatible individual male and female fish. This may not sound challenging, but there are two additional complexities. First, Banggai’s can be aggressive towards others of the same gender. So if you get it wrong, you’ll end up with dead fish.

It is difficult to tell the genders apart when the fish are younger.

There is one tiny difference they have to be a bit more grown-up, and you have to get really close to the fish.

If you look closely at their pelvic region, you should see these two tiny black nubs on their belly, near their little dirty bits. There’s the smallest little difference between males and females down there. The male will have two pronounced vents (tiny little nubs), the other female has one prominent nub, and the other (you can tell exactly where it would be) is flat. 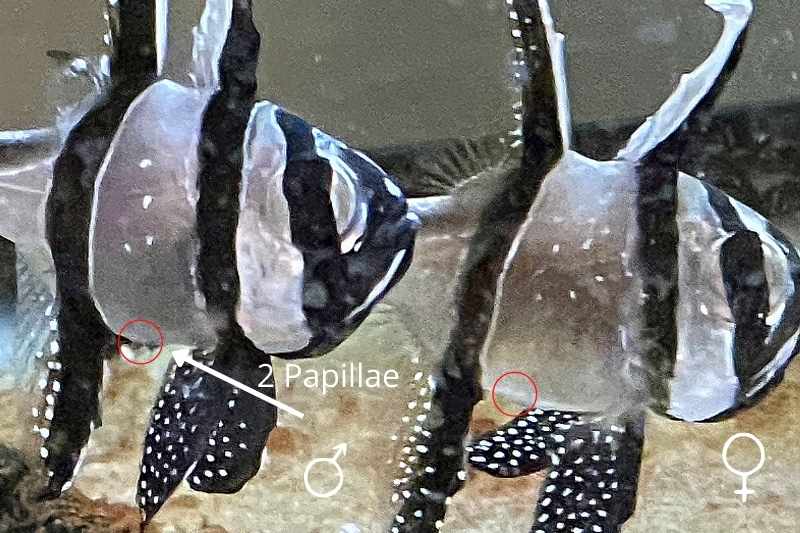 This does come in handy if you’re at a fish store and have enough time to stare, but it is also generally tough because it involves getting your face right up against the tank, which usually freaks them out.

If you can’t pick a pair

The other way to pair them up is to buy ~5 fish and let them pair up naturally. Over a few days, you should start to see the fish separate…not quite into boys and girls…but more like two fish will tend to hang out together. Those two will probably become your pair. You will notice they stay closer and seem to interact with each other (in a friendly way) more.

The other fish will generally start to separate themselves from those two, usually giving them a wide berth. You will also observe aggression between the fish. Typically it will be evident that one fish is actively trying to drive the other fish away. While not 100% scientific, I do share and speculate that it seems, more often than not, the max aggression is between individuals of the same gender.

Ideally, you’ll have multiple tanks and can use those relationship dynamics to pair up your fish.

I don’t recommend you try to keep a shoal of fish. It technically is possible. In nature, they live peacefully together. I have been mesmerized by shoals of Banggai cardinalfish in large public aquaria, but success is much harder to come by on the home aquarium level.

Most likely, you’ll have aggression that will dwindle down until you have a pair left.

Spawning cycle of the Banggai Cardinalfish

Mature, paired Banggai Cardinalfish spawn on a lunar cycle — approximately every 28 days. That means the male has about 8 days to binge-eat his way back to total health before going on another crazy 20-day fast. It is remarkable to imagine the metabolic fluctuation that male cardinals go through.

A bonded Banggai Cardinalfish pair will generally spend a significant portion of their time swimming together. They will twitch at each other, chase each other, hopefully gently, shudder their heads, or flare their gills for a brief period and then go back to swimming or holding their position in the water, close to but oblivious to their partner.

As they get closer to the actual spawning event, the pair will hang out more closely, swimming side by side. The male will flare his gills, open and shut his jaw. The female will swim under the male, and the two will shudder/shimmer next to each other repeatedly.

The spawn is completed during one of the shudder/shimmer pairings.

Mouthbrooding is an evolutionary and behavioral adaptation where one of the parent fish protects the next generation by holding the fertilized eggs in their mouth until the babies hatch. It is one of the most fascinating aspects of Banggai Cardinalfish’s reproductive behavior.

In the case of Banggai Cardinalfish, the male performs this protective role and grabs the egg mass mere seconds after fertilization. Suppose the male successfully keeps the eggs alive and safe from predation and accidental eating. In that case, they should hatch on or around days 20-28, depending on the temperature of the water and undoubtedly other factors.

Conditioning is the term used to describe the period that leads up to the fish breeding cycle. During conditioning, the goals are to:

Since the BC male only has 7-8 days to feast and recover his strength enough to last another 3 weeks of fasting, he must ensure he gets plenty of food to eat. My three favorite conditioning foods for Banggai Cardinalfish are:

How long does it take Banggai Cardinalfish to spawn the first time?

In 2021, I established two different Banggai Cardinalfish pairs about 6 months apart in separate tanks. They were purchased as small, but not tiny juveniles--average/standard size. I observed each pair’s first spawn at 9 and 10 months after bringing them home, respectively.

How long does spawning take?

Courtship (mirrored swimming, shimmering/shuddering, and gill flaring) ramps up for the 2-3 days before spawning. The actual spawning event takes only a few seconds. It is only a split second between fertilization and when the male takes the eggs into his mouth.

Watch a pair of Banggai Cardinalfish spawn in a saltwater tank

Check out this video of a pair of Banggai Cardinalfish spawning in my reef tank aquarium.

A few of my favorite saltwater aquarium fish tankmates for the Banggai Cardinalfish in a saltwater tank are:

You can learn more about the types of fish compatible with the Banggai Cardinalfish in the Interactive Saltwater Fish Compatibility Chart.

To learn more about breeding the Banggai cardinalfish, check out this other article about the first time they spawned in my tank.