The Lawnmower Blenny fish, Salarias fasciatus, is a peaceful community saltwater aquarium fish with a great personality that will hopefully earn their keep in your tank by mowing down the naturally-occurring microalgae.

You can use the following links to jump right to the section that interests you most about caring for the Algae blenny in a saltwater aquarium, or keep going, to read the full article.

Description of the Algae blenny

As you can see in the pictures, the Algae blenny is typically tan/green/gray with small black or blue spots on the head, and darker stripes across its body. Particularly arresting and beautiful features of this fish, when you look at them closely, are their perched eyes, ringed with small dots, blunt head, big lips, and cirri on the top of their heads. 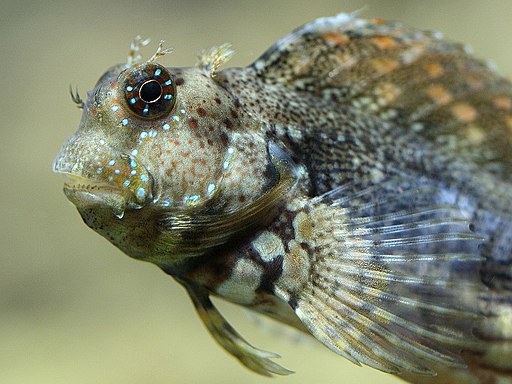 The Lawnmower Blenny fish can live up to 2-4 years, but some specimens have even lived longer in well cared for aquariums.

Ideal habitat for the Sailfin blenny

Because of their special, even helpful dietary needs, the Sailfin blenny does best in a larger established tank with a moderate amount of natural algae to feed on, with their constant rasping/kissing of the rocks and glass. Provide a lot of caves and hiding places for the fish to feel secure and thus reduce stress. The Sailfin blenny will usually dwell near the tank bottom, scraping algae off one rock at a time, and hiding in caves when things become stirred.

The official recommendation is that the minimum tank size for a Lawnmower blenny fish is 55-gallons, although it is a bit complicated and that is not a universally accepted response. The Algae blenny is not an active, open-water swimmer. They, therefore, do not require a lot of open space to swim about. However, because of their relatively specialized diet and picky eating habits, they may require a bit more surface area to graze. They can also be a bit more aggressive in smaller tanks.

Based on the combination of factors there, it is likely best to only add them to a tank that is 55-gallons or larger. Is the Lawnmower blenny reef safe?

The Lawnmower blenny is reef safe. The bulk of their diet consists of algae and other things eating in the pursuit of eating algae. They should be a good companion with the invertebrates in your tank, including crabs, shrimp, snails, and corals.

There have been occasional reports of Sailfin blennies eating corals polyps, but it could be extrapolated that this is potentially the last resort of starving fish. That is why they are considered to be reef safe.

The Lawnmower blenny is a reef safe algae-eating blenny that can help you keep certain problem algae under control.

Are Lawnmower blennies hard to keep?

Lawnmower blennies are not hard to keep, as long as you have naturally occurring filamentous green algae for them to eat and supplement feedings with an algae-based prepared fish food.

The Lawnmower blenny is a peaceful community fish that generally does not display significant aggression towards other community saltwater fish. They will occasionally squabble with other fish with a similar appearance and/or algae-eating niche.

How big do Lawnmower blennies get?

Adult Lawnmower blennies grow to about 5 inches in total length at maturity.

Diet: What does the Lawnmower Blenny eat?

The Lawnmower Blenny is an algae-eating, herbivorous fish that eats filamentous green microalgae, diatoms, filamentous blue-green microalgae, and detritus. Please note the prefix ‘micro’ there--as it is meaningful. Microalgae include the films you see on glass and live rock, as well as the hair algae, which are just thin strands of essentially similar cells. The Lawnmower blenny diet is also known to include tiny invertebrates, eggs, sponges, and small snails, although not thought to be primary foods (Michael 2015). Notice that description purposely excludes macroalgae, like Caulerpa, which may be eaten by select algae blennies, but is not considered to be a preferred or natural food.

It is also important to note that reports vary dramatically about the relative zest with which an individual Sailfin blenny will eat the dreaded hair algae. Some act as lawnmowers, others taste and sample, acquiring a taste for and prefer the prepared foods fed to the rest of the tank.

The key to having a well-fed, happy Sailfin blenny fish is to care for them in an established, mature (read that as 1 year old or older) aquarium with a natural population of filamentous algae. Then, what you may hopefully observe, over time, is that your fish will pick up on the other ‘feeding queues’ within the aquarium and occasionally sample the prepared foods.

Please observe your Algae blenny to make sure they are eating well (you notice the active rasping of algae from surfaces) and that they have a filled-out body with a round belly (evidence of their eating well). Unfortunately, this popular saltwater fish has a fairly long track record of starving the home aquarium. On one hand, the aquarists could be commended for maintaining such a low-nutrient and low-algae environment. On the other hand, the aquarists did not likely ensure proper care and feeding for their Sailfin blennies.

Regardless of whether they are feeding on the microalgae in your tank or not, it is recommended that you supplement the natural Algae blenny diet with prepared foods designed to meet the nutritional needs of herbivores. Good choices for preferred Algae blenny (Lawnmower blenny) food are: 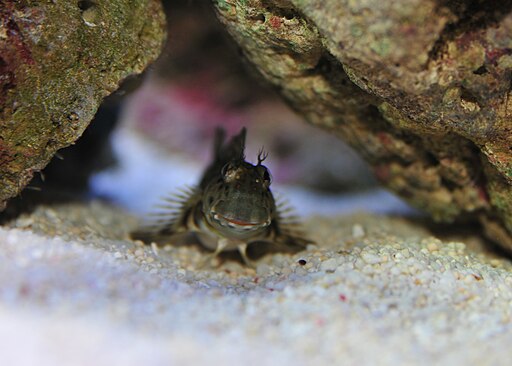 Gotta love that smile, don’t you?

Note that these two products both have microalgae as prominent ingredients, which is why they are suitable Lawnmower blenny food.

Please start out feeding just small amounts at first. As mentioned earlier, many times these wild-caught fish never acclimate to prepared aquarium foods, but hopefully, they will get the majority of their nutrition from the naturally-occurring algae in your tank and learn to supplement that natural behavior with some prepared food.

It is also important to note that your Algae blenny may also learn to eat the other main aquarium staples: brine shrimp, mysis shrimp, etc. The caution here, however, is to be sure not to rely exclusively on those meaty foods, which are primarily designed for carnivorous fish and are likely not nutritionally whole enough to meet the needs of an Algae blenny.

Help! My Lawnmower Blenny is starving, what should I do?

Unfortunately, a lot of Lawnmower Blennies starve in a home aquarium. They need a large area to graze and a constant supply of algae to eat, until they learn to take prepared foods. If you add them to a tank that doesn’t have enough algae, they may starve before they figure out that the prepared foods are a suitable replacement for the squishy green stuff they crave.

For what its worth--this has actually happened to me, so I hope this advice will help you. The best thing you can do for a starving Lawnmower blenny is provide a variety of food options. They are notoriously picky eaters and they need vegetable/algae content to survive and be healthy. Here are the foods that I tried :

The foods that I had the greatest success with, getting my blenny to eat were:

Those are affiliate links which will take you right to the products on Amazon, if you want to add them to your cart quickly.

I suspect that individual results will vary here, with different individual fish having unique tastes and transition periods to move towards prepared foods, but my fish ignored the Spirulina brine shrimp, flakes and Formula Two, which, incidentally were the first three foods I tried. He would take the Formula Two pellets in his mouth but then spit them back out.

The Algae wafers were the next dry food that the fish sampled--he would rasp the wafers a few times and then move on. Nori sheets would also tempt him, he’d come over and try it--but again, it seemed it was not to his ‘taste’.

This is my blenny. A few weeks earlier he was fat and eating algae

All the while, the poor fish got thinner and thinner--incidentally, you can tell a fish is starving when they loose the muscle tissue starting behind the skull along their dorsal region.

I started resigning myself to the fact that the fish probably wasn’t going to make it, when he started eating the Seaweed Extreme pellets. The first few times he struggled to ‘get it down’, spitting back up more than he would eat…but after a few days of trying, he perfected the technique and started swimming up to ‘pluck them’ from the water column before they even hit the sand. Success.

Once he was eating, I tried to feed plenty of pellets, several times a day to fatten him up (and the rest of the tank, which went from normally fed to obese).

The keys to getting a starving blenny to start eating foods it refuses to eat seem to be patience, persistence, repetition and variety. My fish wasted away to almost nothing, until it finally started eating. Hoping that by sharing my experience here will be of help to you if you end up having any trouble.

Behavior and tank mates for the Algae blenny

A healthy Algae blenny has a curious and outgoing personality and will always be very aware of its surroundings. You may even notice that they seem to recognize you and ‘greet’ you when you get close to the tank.

Typical reef species are usually safe with this fish, but an occasional nip at shrimps or corals may occur. Algae blennies may be a bit too aggressive for lagoon species like pipefish or sea horses, so be ready to remove them if they begin to harass these other gentle creatures. It is possible that they are interested in eating the algal films off of the scales of these armored, slow, and docile creatures. Yikes.

Don’t mix the Algae blenny with other similarly sized and shaped fish that would occupy the same niche or you may see aggression and fighting. Attractive fish in their own right and camouflaged

The Algae blenny is generally tolerant and peaceful when paired with other community fish, but as is typical with saltwater aquarium fish you will find that more than keeping more than one blenny per tank may cause some serious squabbles and injury unless those two fish become a compatible mated pair.

Even though algae are their preferred food, there are reports that this fish has been observed niping at clams and SPS coral polyps, so you should monitor this fish and use caution if you can’t tolerate a little nipper. This behavior is also thought to have occurred in starving-type situations. Can you blame them? I’d try to eat your clams too.

As well as the forums over on MOFIB

Check out this Youtube video to learn more about the Lawnmower blenny.

All About The Lawnmower Blenny

If you are having challenges controlling aquarium algae, check out this article:

If you are looking for a few great fish to keep with the Algae blenny, consider:

Or to learn about other blenny species:

The Lawnmower Blenny fish is a popular and inexpensive algae-eating blenny with a great personality. At first glance, they may not seem super-attractive, but when you look close up, they really do have intricate, exquisite detail--and they make up for a lot, with a winning personality. Combine that with the fact that they generally will help keep hair algae and other microalgae under control, and you have the ingredients of a pretty cool saltwater aquarium fish.  What is your experience in keeping them?