Hopefully, you’ll agree that having the dreaded aiptasia anemone in your reef tank is a royal pain. In the event that you have this problem, a great solution and an interesting fish to add is the Aiptasia eating filefish, a unique species of saltwater fish that is visually interesting and can actually help you clean up a problem in your tank.

Unlike other reef fishes that are vibrantly colored, the matted filefish has more of a camouflaged coloration, intended to match the surrounding environment in order to blend in, rather than stand out on the reef. 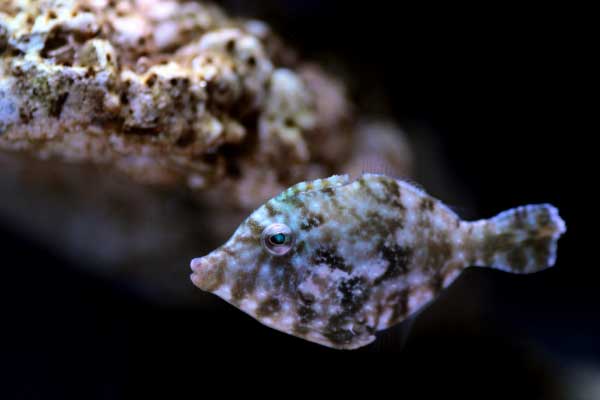 Let’s take a closer look at the amazing Aiptasia eating filefish and what it takes to care for them in your saltwater aquarium. 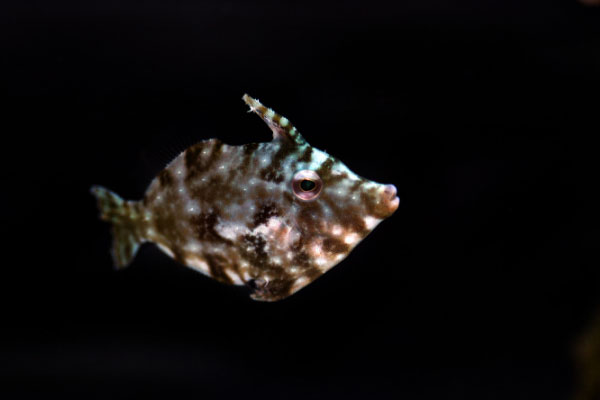 In the wild, these fish live in the waters of the Indian Ocean. Central Pacific Ocean, and the Western Pacific Ocean. You can find them around Sri Lanka, Indonesia, and even the Philippines.

Aiptasia eating filefish prefer to live in the shallow parts of reefs, where a plentiful supply of seagrass is present. This fish can be seen swimming at depths of 6 feet to 49 feet. In the wild this species snacks on nearby invertebrates.

Aiptasia eating filefish are abundant in the wild and are currently ranked on the preservation chart as part of the “least concerned” species.

An interesting factoid about the matted filefish is that it can change its coloring to blend in with its surroundings. In fact, this species of fish is so adept at hiding from predators that it can also change the texture of its skin.

My favorite thing about the matted filefish is watching them swim about the tank, searching for a tasty morsel of food to eat. They use their bristletail and body like a kite, to catch the current and float downstream, and their eyes are always moving about in opposite directions, at times, looking for something to eat.

The matted filefish is a hardy species that generally does well in traditional reef aquarium conditions. Of course, they will be like a kid in the candy store if your tank happens to be overrun with aiptasia.

A peaceful saltwater community tank, with lots of live rock, is generally best. The bristletail filefish can be quite shy when first introduced. Some owners have even noted that the aiptasia eating filefish will focus on the pests without paying attention to other food sources. Once they run out of aiptasia, they may be tempted to eat on meaty corals or polyps in your tank.

You should definitely keep this in mind and buyer beware because there are definitely reports of this--but my aiptasia eating filefish (shown below) did not eat my corals.

The matted or bristletail filefish, Acreichthys tomentosus, is a mild-tempered community fish that will pair easily with other saltwater fish. Problems might arise if you pair them with other aggressive fish because the aiptasia eating filefish will swim about the tank, looking for morsels of food to eat. That behavior makes the bristletail filefish prone to end up in the territory of one of your other fishes, which could be problematic if that territory is defended aggressively.

Yes, the bristle tail filefish is generally considered to be reef safe. As their name implies, they do enjoy eating the soft, fleshy polyps of the aiptasia anemone, so there is a small risk that they might open their palate up a bit and take a bite out of some of your other aquarium corals, but in general, they are thought to be reef safe.

I can share that I have personally owned an Aiptasia eating filefish and they did not attack any of my other soft coral or large polyp stony coral polyps (that I know of).

Sexing the aiptasia eating filefish is quite easy once they reach adulthood. The males of the species will have bristle patches, whereas the females will not. As the male aiptasia eating filefish finishes reaching sexual maturity, the bristles should be large enough to see and will curve back towards their tails. Since this species isn’t aggressive towards each other, it should be easy to create a breeding pair even in adulthood.

This species of saltwater fish will have the best chance of forming a pair when the male and female are added to the tank at the same time. This hardy species breeds without much issue in captivity and will lay around 300 eggs. Females prefer to lay eggs in hideaways when available. You will notice that the female will become defensive over the eggs until they hatch in 3 to 4 days time.

Once the fry are born, you will need to feed them copepod nauplii, enriched rotifers, brine shrimp, and other live foods.

If you want to learn more about breeding saltwater fish, I strongly recommend you check out Matthew L. Wittenrich’s book:

As its name suggests, the aiptasia eating filefish is an omnivore who loves to snack on that pesky anemone. Aiptasia consumption can be great for reef tanks experiencing problems with rapid aiptasia growth. When buying a filefish for this purpose, you do need to be careful though, the A. Toemntosus who wasn’t raised on aiptasia could take a liking to the other corals in your aquarium.

The individual I had in my tank never really ate flakes or pellets. Not to say yours won’t.

Whatever you do, please don’t assume that if you have aiptasia anemones in your tank that you won’t need to feed this fish. Not every individual will eat the anemones and they still need to be fed beyond that. Even if they do eat anemones, they will likely eat them all…and then what?

Overall, finding an Aiptasia eating filefish should not be too much of a problem. I see them all over, these days. Another great solution is to pick a reputable online dealer, like Saltwaterfish.com

Whether to Buy an Aiptasia Eating Filefish or Not

The aiptasia eating filefish is a fun and helpful fish to have in your tank. Their quirky nature combined with their constant search for snacks, with those googley eyes makes them a lot of fun to observe.

This species is relatively easy to pair up and spawn (by saltwater fish standards). If you’re buying this species to help with your aiptasia problem, then you will need to watch it carefully in order to make sure they don’t develop a taste for your coral polyps.

Other resources to check out

First, you might enjoy watching this video about them, to complement the online reading here:

Watch This Before You Get An Aiptasia Eating File Fish

Here are a few articles I suggest you read, to expand your knowledge:

Looking for something totally different?

Check out this article about the most popular aquarium salt mixes