Bryopsis is a problem alga that looks like hair algae, but it’s not. If you look closely at hair algae, you will see very clearly why it gets its name. Each of the strands of hair algae is thin and filamentous, like hair.

Quick sidebar, don’t you love the word filamentous? It sounds so proper.

When you look closely at bryopsis algae, and I hope you never have to, after you look at the images on this post, you can see that the hairlike filaments (can you hear me in your head pronouncing the word filaments with great affectation?) actually have a bit of a fern-like structure or shape to them. 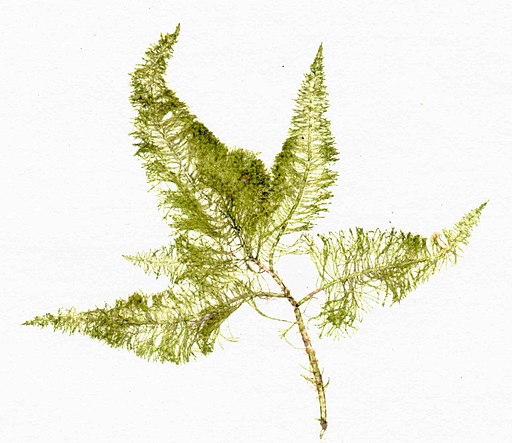 In a nerdy, biology way…this is very cool.

However, if you see this in your tank, I’m sorry. You’re in for a good fight.

Bryopsis algae get into your tank in the 3 following ways:

Okay, I might have gotten a bit carried away on that last little bit. I was just joking about the third way. It can’t show up in your tank spontaneously. I was just trying to scare you a bit. 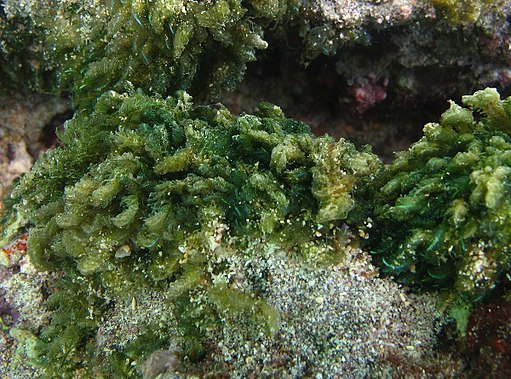 It has to hitchhike its way in. And since catching a ride into your tank on live rock or the rock/plug that a coral frag is on are essentially the same thing, let’s agree that bryopsis algae primarily gets into your tank by taking a ride on something you’re adding into your tank.

So make sure you closely inspect everything you add to your tank—and if it has bryopsis algae on it— here’s a quick tip.
Don’t add it to your tank!!

3. How to prevent it

Like dealing with most of the baddies in this hobby, prevention is key. By all means, if you see any signs of problem algae on a piece of live rock, rubble or frag plug, and napalm is not available in your area, remove as much of it as possible, using your gloved fingers or with tweezers or even chip it off with a chisel. This is important.

Once you’ve removed everything you can see from the rock, bathe the areas where it was growing in 3% hydrogen peroxide for 3-4 minutes. Remember to do this in a small container you keep outside of your tank. Don’t dump a vat of H2O2 into your tank :). I know you know that. Just saying.

Quarantine the frag until you are absolutely sure it is gone. I recommend at least 4 weeks if you can drum up the patience. You really don’t want to add this to your tank.

Take the time in quarantine to inspect and re-inspect to make sure you’re not adding anything you don’t want into your tank.

Most people realize they are fighting bryopsis algae right before they go crazy. This is because they thought they had hair algae and were fighting it with the traditional methods I and other authors have outlined before:

Those are generally best practices when trying to deal with algae—because they hit the algae where it hurts, but for some reason (superpowers?), bryopsis algae seem to be immune to this way of managing the outbreak and require a special treatment protocol that I will describe below.

5. How to treat bryopsis algae

There are two methods of treating bryopsis algae that have been proven to work.

Fluconazole is a medication that was originally patented in the ’80s and marketed to fight fungal and yeast infections (in humans), and is still used as a prescription anti-fungal treatment today. Fortunately for us, this miracle drug also does some serious damage to that problem algae we’ve been talking about in this article.

Interestingly, the instructions say NOT to use Reef Flux if your tank has Caulerpa or bryopsis algae–to avoid nutrient spikes. Reading between the lines there, it’s going to kill your algae and cause your water parameters to get a bit rough. Which does also make an important point about watching your water parameters to deal with any nutrient spikes.

According to the manufacturer’s instructions for Reef Flux, the recommended dosage is to open and pour in 1 capsule for every 10 gallons of water. But remember, that is the recommended dose to fight a fungal infection on your fish. That’s the topic of a different article.

To fight bryopsis, most people online report that they used 20mg per gallon–essentially 1 capsule for each gallon of water. This is a bit bold, considering that it is 10x’s the manufacturer’s instructions. It’s also a bit concerning to me because it is mostly observational reports from other hobbyists informing the use here, rather than a controlled study, but the reports that are out there seem relatively supportive of this dose and don’t mention ill-effects.

Fluconazole is stable in saltwater and is much easier to dose than copper to fight saltwater ich. You add it to the tank once and watch it work over the next couple of weeks. If you’re interested in experimenting, consider trying it with less medication, like 1 capsule every 5 gallons and report back your results.

A classic, but more complicated way of fighting back is to safely raise the magnesium levels in your tank. In my article about the 9 most important reef tank water parameters, I don’t include magnesium as one of the most important 9 parameters–because it generally isn’t a problem–until it’s a problem. In this instance, low magnesium does seem to contribute negatively to cases of problem algae infestation.

When raising magnesium levels in your tank, you want to raise it up to about 1400 ppm – 1600 ppm to fight bryopsis algae–and you want to do this slowly, over a period of about a week or so, to avoid shocking anything in your tank.

Keep in mind that some of the corals in your tank will also ‘consume’ magnesium, so you need a high-quality test kit to track your magnesium levels, over time, to make sure the Mg levels are in the therapeutic range.

Battling with bryopsis algae can be a frustrating and humbling experience. The traditional methods of fighting problem algae won’t work. Instead of driving yourself nuts, try one of the two methods outlined in this article and reclaim your tank.

What has your experience been? If you’ve successfully battled bryopsis algae, can you please leave a comment below to share your thoughts, so that other people can benefit from your experiences?