I started this blog in 2009, with the goal of helping you (or other people like you) get up to speed quickly with your reef tanks and avoid making the same mistakes I did.

Well, the good news is that there’s a lot of learning going on these days, as I continue to make mistakes.Last night, I was painfully reminded of a lesson I learned years ago in this hobby. There are a bunch of things in our tanks that can hurt us. I know, you love your tank, but be careful.

Here’s a question that you may already know the answer to:

When should you wear your reef tank gloves?

Any time you stick your hand in the tank. Don’t be lazy or careless (I promise, I’m not judging you…I was recently careless). 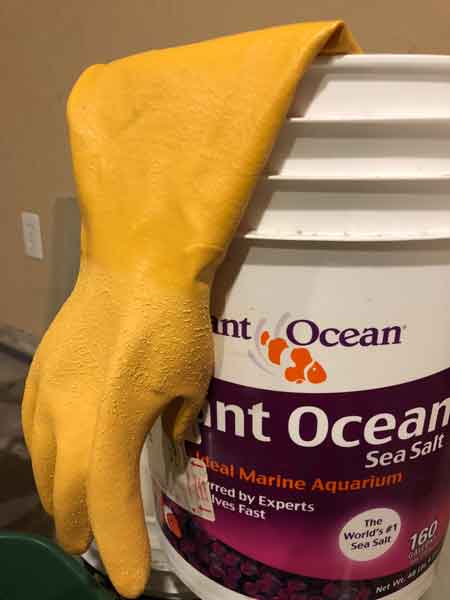 If your gloves look like this, you’re wearing them wrong!

My tank is melting down a bit. Last weekend we were hit by a crazy Nor’easter, which is a certain type of storm. It blasted the Northeast United States with big winds and lots of snow.

Big winds and snow are a recipe for knocking over trees and big branches. Which, in turn, is a recipe for power outages. There’s probably another post or two about my experiences here if I can muster up an article that sounds like something other than whining…

But the point is that I’ve been doing a lot of maintenance on my tank, trying to salvage the living things that I can. Last night, while I was removing rocks and pulling out melting corals (not two of my favorite hobby chores, I can assure you), I knocked over an angry, but still alive Devil’s Hand Coral, one of my favorite soft corals left. It didn’t seem so bad, at the time, but when I got home from work, I realized I needed to stand the coral back up better.

So, after doing another MAJOR water change (problem algae growth is spiking…more stuff is still dying), a tired and frustrated reef tank monkey just stuck his hand in the tank to move him. He wasn’t on a big rock or anything, a tiny piece of rock rubble.

You know how I know?

Check out this picture. 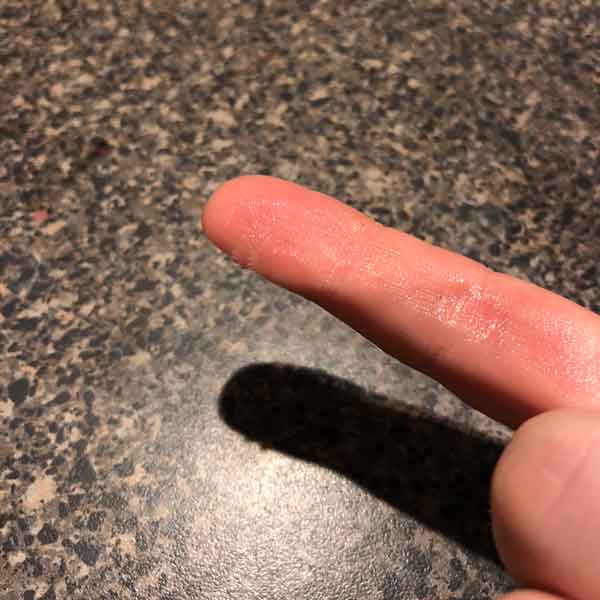 You can see EXACTLY how wide this sucker was…because you can see two distinct rows of bristles, still stuck in my finger. The bristles even cast their own shadow. Yikes!

So please indulge me in trying to learn from my stupidity and put a glove on before you stick your hand in your tank.

There are several dangers lurking in your reef tank:

Curious how to remove bristle worm bristles from your fingers?

In the name of science and out of necessity, I tested two methods of removing bristle worm bristles from my fingers:

My first instinct was to use tweezers. It worked, but it was tedious and didn’t work…that well. The ratio of pinches to # of bristles removed was not that good.

The second thing I did was ask my wife to try using the tweezers, to see if the extra dexterity from her two hands, versus my left hand (fun fact: I’m right-handed), would help. It did. Marginally.

After a few moments and tens of bristles removed. The muse of invention compelled me to find a better way. The best method I found, doing no internet searching for the problem (my pride and finger hurt too much to see what the world would tell me), was to use scotch tape to yank them out, in bulk.

I noticed two things. Push on the spines the wrong direction–and it hurts even more. Push on them the right direction…and they come off in clumps. Halleluja.

So please, don’t be like me. Be smart. Be thoughtful. Put your gloves on. If you don’t have gloves, you should get a pair.

I’ve had both pairs over the years. Each works well. I’ve enjoyed the yellow ones more. They are half the price and don’t stink as bad. But either set will work well at keeping you from getting stung by bristle worms. You can check out the price and reviews on Amazon, if interested.

Would you like to join in and either heckle me and my stupidity or share a similar experience you might have had? Please leave a comment below. I could use the company. Feeling D-U-M, DUM right now.