I bet you aren’t testing for THIS in your aquarium…

Countless articles herald the virtues of testing your aquarium water on a routine basis. I know I have even written my own version of that time-tested advice. When you are cycling your tank, it is important to test for ammonia, nitrites, and nitrates. On a routine basis, you should be testing the specific gravity of the water (or salinity if you have a refractometer), temperature (of course), calcium (if you have invertebrates), and at least nitrates. 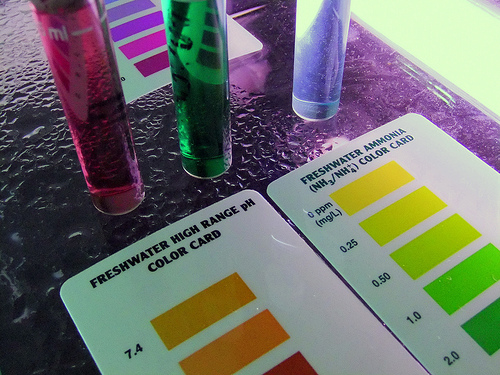 Ready for the big reveal?

Could I string this out any longer?

Yes, of course, I can. You’re underestimating my ability to be obnoxious. In fact, I’m quite enjoying this. Hope you are too. If you can’t stand the suspense, feel free to skip down the page…but please come back up.

Ok, the suspense is killing me. I can’t keep it from you any longer. I’m talking about stray electricity in your aquarium

What is stray electricity in your aquarium?

Let’s face it; there is a LOT of electricity coursing all around and through your aquarium. Hopefully, all of that electricity is running safely within the properly insulated and waterproof cases, housings and wires. An unfortunate reality, however, is that this equipment sometimes fails. At this point, based on my own personal experiences with stray electricity, I’m inclined to declare that this equipment commonly fails. Stray electricity in your aquarium therefore is the result of what happens when one of the components of your electrical devices fails. The result of that technical failure is that electricity escapes from the equipment, causing a shocking hazard in or around your aquarium.

Why is stray electricity a problem?

The biggest reason stray electricity is a problem is that it creates a risk of electric shock, which is a serious safety issue for you—but it is also a safety and health issue for your fish and corals. In my situation, the electricity was running through the multi-aquarium set up in my basement (my breeding setup). I was surprised that there were not more noticeable issues with my fish (for instance…dead fish).

I did notice some minor fin fraying—but that’s about it. However, stray electricity in an aquarium can cause some more serious health problems for your livestock, including head and lateral line disease.

How can you detect stray electricity in your aquarium?

Well, the way I seem to detect it (which I don’t recommend) is I stick my hand in the tank and get zapped. In all seriousness, that’s why it’s a big deal and something I’m going to start testing for on a regular basis—there is a legitimate risk here of electric shock.

How can you protect yourself against stray electricity in your aquarium?

The safer way to go (safer than testing for an electrical problem) is to install a safety device to eliminate the hazard in the first place. A piece of equipment I’m going to buy right now is a grounding probe:

The grounding probe is a metal rod you place in your sump that you then connect to a grounded plug/outlet. When I was shocked the other night after reaching into my aquarium, the electricity was treating my body as a grounding probe. I am more than happy to outsource that role to the grounding probe. I’ll report back about this once I install it. I think they’re super-easy to install.

This is at least the second time I have been zapped by an electrical current running through my tank. The first time I traced the stray current back to a cheap powerhead. This time, however, the leak was coming from a pretty legitimate, name-brand pump. I’m officially ready to declare this as something that happens more often than you may think. I encourage you to stop by your local fish store and pick up a grounding probe today.

But I’m actually slightly conflicted about the safety solution here. Clearly, the benefit of removing the safety hazard for myself and the fish outweighs any potential downside—but if I had the grounding probe installed previously—I never would have known there was an electrical leak in the first place.

This is why I’m going to (disconnect the grounding probe first) test for stray electrical current in my aquarium on a periodic basis from now on. I hope you do the same.