The Foxface rabbitfish is a bold (personality and color) saltwater fish with a peaceful, almost confident temperament. This species is easy to feed and care for and has a brilliant yellow, white, and black coloring that will liven up just about any tank.

Let’s dive deeper into the Foxface rabbitfish’s world to learn more about what it takes to care for them successfully in a reef tank.

The scientific name for the Foxface rabbitfish is Siganus vulpinus. Unlike other saltwater fish, there doesn’t appear to be a lot of regionalization in what they are commonly called, locally. Seems this is finally one thing we can all agree on, that this fish is called Foxface or perhaps Foxface lo.

Foxface rabbitfish (Siganus vulpinus). Note the solid yellow side and fins with a black and white face, long snout

There is a very similar looking and related species, Siganus unimaculatus, called the One spot Foxface, because they have a large black spot on their sides.

One spot Foxface (Siganus unimaculatus). Very similar but note the prominent single spot on the side, towards the tail

Husbandry and care needs for both of these species are very similar, so the information and advice here apply to both species.

A fully grown adult Foxface rabbitfish should grow to a maximum size of about 8-10 inches in total length, although as with humans, there are lots of developmental variables at play there.  The gender of the rabbitfish doesn’t seem to have much influence on their size, with males and females each reaching approximately the same size as adults.

Interesting observations about the Foxface rabbitfish

For the reef aquarist considering keeping the Foxface rabbitfish, perhaps the most compelling reason is this fish’s insatiable appetite for algae--even (or especially) some of the problem algae varieties including the filamentous (green hair, bryopsis, and the dreaded bubble algae).

Their striking coloration, of course, makes them a fan favorite. 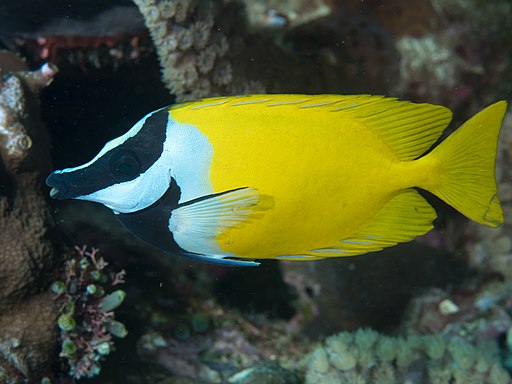 Lastly, the boldness and confidence, with which they swim around, in an aquarium, add to their attractiveness as an addition to a community reef tank. In the eat-or-be-eaten world of the tropical reef, the Foxface rabbitfish has evolved an interesting and fairly effective means of protection. The Foxface rabbitfish does not rely on camouflage or cryptic behaviors to avoid predators. It avoids predation through bold coloration and swimming out in the open…oh yeah…because it has venomous spines.

Because of the protection those venomous spines provide, most Foxface rabbitfish go about their days with an air of entitlement, as if they don’t understand what all the fussing, hiding, and skittishness are about.

How adding a confident fish like a Foxface can help

If the other fish in your tank are otherwise predominantly timid, adding a bold, confident saltwater fish species like a Foxface rabbitfish can often help. I am not describing this behavior in the right scientific terms, but fish that are timid and hiding are potentially hiding from predators or aggression. When they see (from the vantage of their hiding place) the bold confidence of the rabbitfish (or any other bold, confident fish), it can sometimes de-escalate the ‘stress’ and convince those fish, it’s okay to come out. The Foxface rabbitfish is considered to be reef safe, with caution. As long as this algae-eater is well-fed, they will usually leave corals, clams and other invertebrates alone. Hungry/starving fish will sometimes nip at certain coral types. 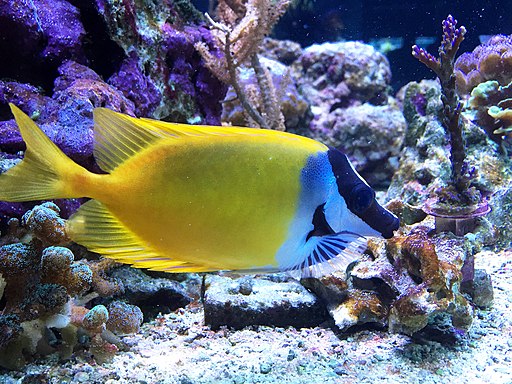 Hardiness or difficulty level caring for the Foxface lo

The Foxface rabbitfish is a relatively easy fish to care for. As mentioned before, they are bold, bordering on confident, and are extremely good at eating algae, which they will do for large periods throughout the day. Due to the protection provided by their venomous spines, they can also be kept in fish-only setups with more aggressive species, giving this great fish a bit more versatility than is common with most other community fishes.

The one considered an easy fish to care for as long as your tank is properly set up. One thing to keep in mind is that reaching your hand in the tank can be a little dangerous. The fish is equipped with dorsal spines containing venom. While this fish won’t hurt you on purpose, running into a spine can be painful. Look at the spines on this rabbitfish.

One caveat to the ‘easy’ difficulty rating here is to consider your ability to stay safe and not get stung unintentionally by the venomous spines. Given the fact that you could have an accidental brush anytime you reach in the tank, it would be good to ensure proper safety, including, but not limited to the use of a thick glove like these:

Keep in mind, the glove likely won’t stop a full-on impaling, but the extra layer of tough skin can help with incidental scrapings. So the caveat here is that they are easy to care for if you avoid carelessly dunking your hand in the tank.

How big do Foxface rabbitfish get?

A Foxface rabbitfish will grow to be about 9 inches (22.9 cm) in length as a fully grown adult fish.

What size tank does a Foxface rabbitfish need? (minimum size)

The Foxface rabbitfish needs a minimum tank size of 90-gallons, of course, bigger would be even better for this relatively large saltwater aquarium fish.

Here is a list of other great saltwater fish for a 90-gallon tank.

The Foxface rabbitfish is a peaceful herbivore, protected by venomous spines, making them the perfect choice for a tank with cleaner shrimp or small fish or even more aggressive, fish-only tanks.

However, the recommendation to keep them with aggressive fishes does come with a caveat. The fish has venomous spines, not a bulletproof vest. When mixing aggressive species, you want to avoid drastic mismatches in size, or you may find your rabbitfish disproportionately picked on (and hiding), if it is David in a tank of Goliaths.

The other compatibility consideration, which is not unique to this saltwater aquarium fish, is that there would likely be aggression between rabbitfishes in the same tank. So best to have 1 per tank, unless already paired.

Consider keeping them with a Picasso, Clown, or Niger Triggerfish or maybe even a Dogface pufferfish.

Popular eel species like the Blue ribbon or Snowflake

They are also great with popular community saltwater fish like six-line wrasse, too. Fragile, docile fish, like Mandarinfish, are possible tankmates in a large, mixed reef tank, assuming plenty of room for the rabbit to graze and not interrupt the shy mandarin.

The Foxface rabbitfish will dine on the natural buffet of good and problem algae in your tank. The best tank setup will have lots of rockwork, crevices, and surfaces for the rabbitfish to pick at and hide in when they feel threatened. However, it is recommended that you NOT have a tank full of algae, as a general rule, and with the anticipation that your free-range algae are not enough to sustain a growing rabbitfish, you should supplement with fresh vegetables, algae sheets, or flakes/pellets with algae bases. 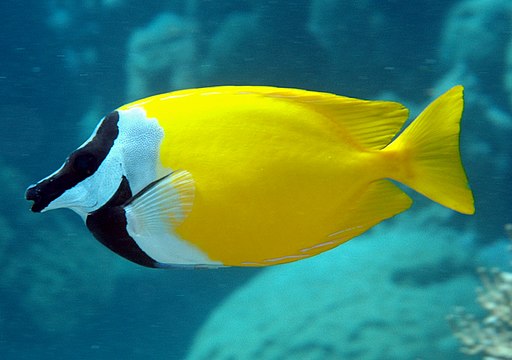 Remember one of the dangers of this fish in a reef tank is that a hungry rabbit may nibble on your corals, so please keep them fed. 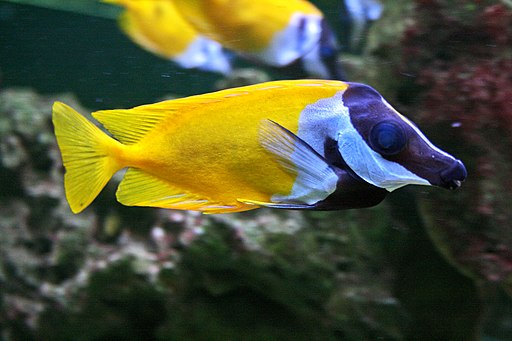 Note the indentation where the head meets the back (dorsal fin area).

The image above (sorry) shows a sad, emaciated fish. Like us, our fish friends are equipped with survival mechanisms that burn fat and then eventually muscle tissue, when starving. One of the most recognizable signs of starvation in any fish (including Siganus vulpinus and Siganus unimaculatus) is when you see that notch or indentation above their heads. See how fat and ‘meaty’, for lack of a better description the upper back is on the first fish--and look how thin and ‘bony’ the body is right above the head of the second fish. That poor fella hasn’t eaten in quite some time.

Will they eat seaweed?

Fleshy green and fleshy red macroalgae, or seaweed, is a main, preferred food for Foxface rabbitfish. Commercially available dried seaweed like Nori is a good food to feed.

What type of algae do Foxface rabbitfish eat?

A Foxface rabbitfish will eagerly eat three common types of algae that can be problematic in a saltwater aquarium:

Do they eat bubble algae?

They do not commonly eat bubble algae. If you have bubble algae in your tank, emerald crabs and the Indian Ocean Sailfin tang are best.

Do they eat diatoms?

They do not commonly eat diatoms. If you have diatom problems in your reef tank, a Chevron tang, Kole tang, or Lawnmower blenny will be a better option.

This species generally enjoys spending most of its time near the middle and bottom of the tank. Essentially sticking close to the structure. You can often find them picking at algae spots or swimming through your coral. Keep in mind that they are a bit territorial to other fish of the same species and will likely swim around a chosen part of the tank. 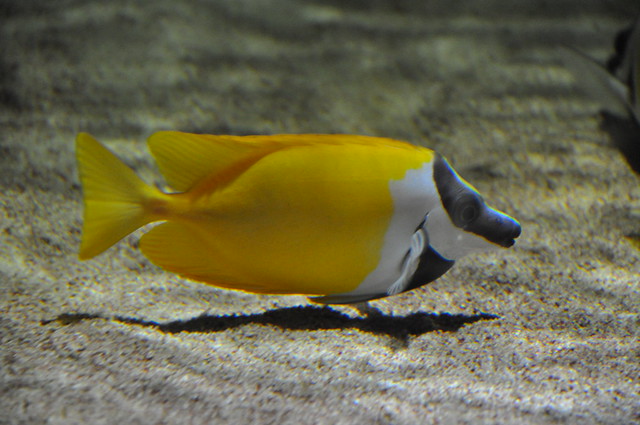 Foxface near bottom of the tank

On natural reefs, Foxface rabbitfishes tend to pair up when they are juveniles (about 4-inches in length) and are thought to pair up, for life (Source). 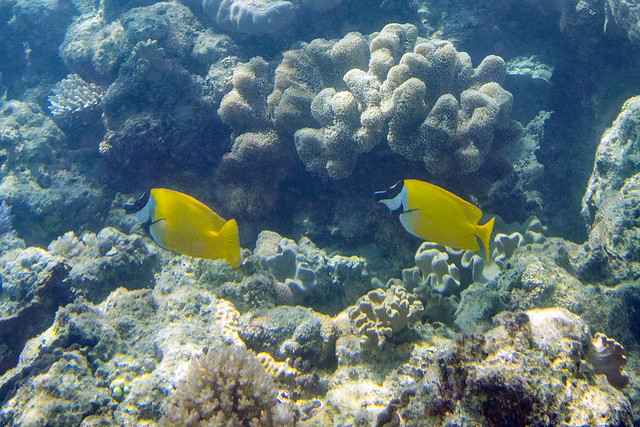 I do not believe the Foxface rabbitfish species has been successfully bred in captivity. They are pelagic spawners, which means they broadcast spawn their eggs in the water column and the eggs float among the plankton before hatching. There has been a lot of progress recently in breeding pelagic spawners, so hopefully, we will see a breakthrough soon.

The Foxface rabbitfish is an almost ideal saltwater aquarium fish. Bold, hardy, easy to feed. Peaceful and somehow compatible with both shy and semi-aggressive fishes.  There are a lot of great qualities in this brightly colored fish. They will even provide the service of keeping your tank free from algae. Just be sure you:

Check out this video:

FF#34 | Keeping a Foxface (Siganus) in your Reef Tank

If you’re looking for a bold yellow fish, check out these two other very good choices:

Or perhaps other great algae-fighting articles: